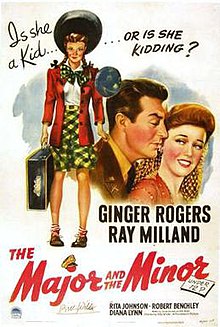 Though Wilder liked to hop genres – or probably because of it – he’s a great example of the auteur theory.  After all, no matter the film, he’s still exploring themes revolving around the dark underbelly and rot of humanity.  Sometimes the exploration of them is blatant and surface level.  Sometimes, it’s not.  But almost always, you’ll find it.

No to mention the favoring of darkness and acidity in his style.  Obviously, some of Wilder’s films shaded more towards that darkness end of the spectrum, like The Lost Weekend.  Others are more middle of the spectrum, balancing the darkness and the acidity, like Sunset Boulevard.[2]  Still others are so acidic they’d eat a hole in a steel plate in two seconds flat — Ace in the Hole.  Even his silliest film, Some Like It Hot, rests on the same themes, given the plot is set in motion by a gangland murder, and revolves around a character, Sugar Kane (Marilyn Monroe) who has certainly been sexually exploited in her not-so-distant past.[3]

I suppose the point of all this is that even when at his most comedic Wilder’s films feel like they carry some weight – that the fluff isn’t so fluff.  And perhaps that’s why the films stick around – they are not some surface level, saccharine nonsense, but feel real and lived in.  They feel like somebody cared about them, and weren’t just being made for a profit.

Which is what makes it so surprising to learn Wilder actually built his early Hollywood career on the back of comedy writing, primarily for Ernst Lubitsch.  In fact, some of Lubitsch’s most memorable films were co-written by a youngish Billy Wilder – Ninotchka, Bluebeard’s Eighth Wife, and Ball of Fire.  And when it came time for Wilder to make the transition from writing to directing, it makes sense he’d do it with a film like The Major and The Minor, which is screwball-adjacent, even as the film barely hints at the sort of films that would be coming from the mind of Billy Wilder as he filled out his oeuvre in later years.

Small-town Iowa girl, Susan Applegate (Ginger Rogers), has had enough of the big city.  After one indignity too many she lights out of New York for home.  Only, she can’t afford the train fare to get there.  Her plan?  Masquerade as a 12-year-old to get the reduced fare.  But it isn’t enough to play the ruse only at the ticket window – apparently, she has to run it all the way back to Iowa or else risk being tossed off the train.  This is but a minor inconvenience until she meets a handsome Army major along the way (Ray Milland) who’s returning to the military academy where he teaches.  Susan immediately sparks to the man and so faces a conundrum: keep up the ruse of being 12-years-old, or come clean to him.  After an escalating series of events – including a stopover at the school in Indiana where the Major teachers – Susan reveals the truth and in short order the pair is off to Las Vegas for a quickie marriage.

Though Ray Milland’s character, The Major,[4] is the first person listed in the title of this film, he’s not actually focus.  Rather, that would be Ginger Rogers.  But, because the play on words of the title of the film has him listed first – The Major and The Minor – we’ll go in that order.

And if we’re being honest, it’s fine to consider Milland first.  After all, there really isn’t much to say about him, and to discuss him last, after all the gushing to come for Rogers, would almost make Milland seem an afterthought to a movie he’s so important to.  And while he’s not the star, he’s also not an afterthought.

The fact is, though, the role of The Major requires very little of Milland.  He has to look good in a military uniform, has to be decent, and has to be handsome.  It would obviously help if he has chemistry with Rogers.[5]  And hhe needs to be able to play a bit fatherly, while also being a bit dim.  And truly, all the rest of those are somewhat secondary to the requirement he be a little dim.  After all, if he were a little smarter you’d wonder how it’s possible he doesn’t see through Susan/Roger’s ruse in an instant, and if he were a bit dimmer, he’d come across as a buffoon and you’d be confused why Susan is hot for him.  Sure, none of these things are really what a character is made out of, but Milland does all that’s needed with it.  But in a way, while the film doesn’t ask a lot of him, it actually asks everything of him.  After all, it’s through Milland that we find Susan’s ruse believable, and if Milland can’t sell it, the whole thing is sunk.

The Two Faces of Ginger Rogers

As for Rogers, there is no mistaking this film as anything other than a star vehicle for her.[6]  It showcases everything she does well – screwball comedy, light drama, and dancing.[7]  If the film works at all, it’s because of her.  It’s on her alone to sell the premise of an adult woman playing a 12-year-old in order to get a reduced train fare, which is not exactly the easiest sale ever made.  Sure, she gets some help with hair and makeup on this one – they put her in pigtails, and take some of the finished look off her face – but hair and makeup can’t make us ignore that we are looking at a full-grown woman.  If Rogers can’t make us believe she’s just well-developed 12 year-old, thanks to her Swedish stock,[8] then the whole thing just becomes ridiculous.[9]   Fortunately, Rogers is up to the challenge.

Given how deft her performance is, it’s a shame the movies most memorable line – “Why don’t you get out of those wet clothes and into a dry martini?” – is said about Rogers, not by her.[10] But don’t worry too much over that, because all the best comic bits of the movie originate with Rogers, or play best because of her.  I especially love the way she steals a balloon off a kid in the train station, a prop she uses to help sell the look of being a 12-year-old.  And the running gag about being from Swedish stock.  And the way she has to constantly be on the lookout for all the handsy cadets at the military school, and the way they all seem to come onto her in exactly the same way.  In a way, the movie feels priceless, and that’s all owing to Rogers

The only unfortunate thing is that because The Major and The Minor doesn’t have as much bite as Wilder’s other films, nor the snappy rat-a-tat dialog of other screwball comedies, it winds up feeling a bit like a minor-classic, as opposed to one of the all-time-greats.

Notwithstanding all of the above, this is a film that ultimately turns romantic, which would be fine if not for the fact that it involves a grown-ass man and a 12-year-old girl.  Yes, we as the audience know the girl is actually a woman, so can laugh at the situations she winds up in, but in the movie the man does not know it, and only sees her as a 12-year-old girl.  Well, except at those times he squints at her just right.  The implications of this are pretty gross to consider, especially for what is supposed to be a light comedy.

[1] Throwing out Avanti! is not some idle comment on my part to show off that I know more Billy Wilder films than you.  I legitimately own it on blu-ray and watched it about six weeks ago.  Besides, it would be a weird flex to act like I’m so big a Wilder scholar that I like Avanti!, when I clearly hadn’t seen The Major and The Minor before this series gave me the chance.

[3] And lets not forget his most ‘romantic’ film – The Apartment – happens to be about a bachelor trying to get ahead at work by loaning his apartment to the married me in his office so they have a place to hook up with their side-pieces, one of whom turns out to be the woman that guy is secretly in love with, and who tries to kill herself after one of those men reject her.  Never mind it’s steeped with toxic masculinity.

[4] The character does have an actual name, but I can only remember he was The Major, so am sticking to that.

[8] Her Swedish ancestry is a running joke in the film.

[9] While Milland helps sell the story to the audience, there’s nothing to sell if Rogers doesn’t sell it to him.

[10] It certainly would have been more delicious is the woman said it, than the creepy man who actually does.