Douglas made his name in films from the late-1940’s onward, just before the ‘method’ style of acting came into vogue and the traditional notions of who could be, and who could not be, a movie star gave way to a system dominated more by unique faces and character actors.  In other words, the age when guys with a sense of stylization to their acting stopped winning Oscars — see e.g. Laurence Olivier — and guys with a touch of naturalism started winning.  Guys like Ernest Borgnine.

Naturally, all that is sort of a gross simplification of the era, because there was no clean break between the two, as method guys and stylized guys swapped Oscars from year to year.[1]  But in some sense it’s not a simplification, because obviously one trend takes a little bit of time to come in and truly push the other out.  It doesn’t always just happen overnight, it just slowly crossfades from one to the other, and maybe that’s where a guy like Douglas came in.  He was certainly conventionally handsome, with a toothy grin, and he was stylized in his acting.  But he was styled in an almost method way.  His characters lived out loud and seemed to come from within himself, but most sort of played like a version of Douglas himself.  Although, at the same time, they didn’t.  In other words, part of his success might’ve been the ability to bridge the two eras.

Whatever he was, or wasn’t, the truth is Douglas’ career is basically unimpeachable, at least up to the early 1960s, when everything slowed.  Sure, he went right on acting, and even directed some stuff, but there is no denying that after the highs of his career through Spartacus, everything else was a comedown.  Before Spartacus he played Van Gogh, he did The Bad and the Beautiful, he did The Ace in the Hole, he did Paths of Glory.  After Spartacus, he did a fair amount of not much.  It might be fair to say his relevance died far earlier than he did.[2]

But even if he went out of vogue, there’s no denying Douglas should have been a movie star.  After all, only a few guys were able to be at all times masculine, magnetic, charismatic, yet somehow vulnerable, even as they threatened to go deliriously over the top.  There’s something compelling about an actor who makes a career out of sweaty-obviousness.  Out of being Tortured! with a capital-T.  Whether villain or hero, that person always sells tickets.  Except when they didn’t

Vikings are raiding and pillaging England, which the English are not down with.  Making matters worse?  Vikings manage to kill the English king, opening up a lane for a far-worse king to take his throne.  Complicating all this is the dead king’s widow has a secret love child by the Viking King, Ragnar (Ernest Borgnine).[3]  To protect the child, the widow smuggles him out of England and, through some convoluted plot mechanics, the baby grows up to be Eric (Tony Curtis), a slave to Ragnar’s tribe.  Naturally, neither Ragnar nor Eric are aware of their significance to one another.  Anyway, Eric manages to make an enemy of Ragnar’s other son, Einar (Kirk Douglas), putting his eye out with a hawk.  Somehow, Eric escapes death and winds up — again, plot mechanics dictate — aligned with Einar for a raid of England to free the English Kings Bride-to-be (Janet Leigh), and to enact some revenge on the dastardly King Aella (Frank Thring).  In the end, the truth of the brother’s relationship is revealed, they have a fight to the death, and one of them is sent off on a Viking funeral.

This is a movie of villains — there are basically no good guys in sight.  The English, and their king, Aella (Frank Thring) are played just one step short of outright sniveling.  They are ruthless to their people, ruthless to their enemies, and desperate to insulate and protect their power.  The only one of them that gives any sort of performance to watch is Thring as Aella.  Of all the English folks in the film he’s the only one that understands what movie he’s in, and what role he’s playing, and tries a bit harder than the others.  In his way, Thring plays the role as if he was playing a malevolent David Lochary, which means haughty, and only marginally interested in being evil, even as he is interested in being evil.  If there’s anything wrong with his performance, it’s that there isn’t enough of it. 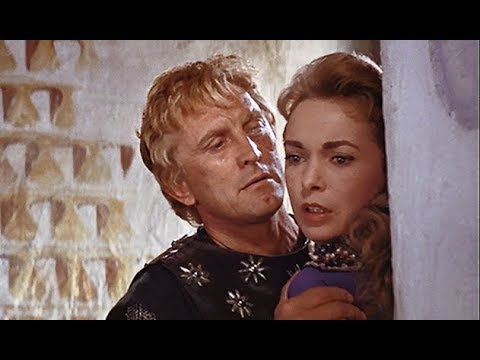 The other villains are the Vikings, who are all raiding and pillaging thieves.  Even the best of them has no pure motivations.  Sure, some are of the Ernest Borgnine mold, which leans more towards gregarious and benevolent as the Viking King, Ragnar.  Others lean towards the Kirk Douglas mold, which is brash, prone to grudges, and dangerous.  While it was a bit fun to see Douglas play a character who was borderline evil for a change — his parts in The Bad and the Beautiful, and Ace in the Hole are more amoral-opportunists than evil — it still might’ve been better if he’d camped it up a bit instead of playing it basically straight.

Janet Leigh is sexy as hell as the Macguffin in the plot — or one of them.  In a big way Leigh typifies the essence of a ‘sweater girl’ and this film uses it to full effect.[4]  Her breasts are big, pointy, and on display — they are never allowed to slip from our minds for long.  Plus, the movie knows how to present her to keep us interested and, even though this is a 1950’s movie and nudity was never going to happen, the film does tantalize us with it at one point, when Curtis rips open the back of Leigh’s corset and exposes her milk-white skin.

The only dud in the cast has to be Tony Curtis as Eric, our hero.  He was never what you’d call a great actor, in spite having charm and the ability to hold a camera.  No, he was a pretty face who milked the assets he had, which makes him better known for looking good than being good.  The best he ever was was in Some Like It Hot, where he seemed to poke fun at himself.  Here he’s self-serious in all the worst ways.

But if we’re honest, Curtis doesn’t really bring this movie down — the movie does that to itself.  On the whole, it’s saddled with pedestrian direction, overdone music, and action sequences that are surprisingly stationary and dull.  The film desperately wishes it could be exciting, but it’s never more than unexceptional, which is a strange thing to say about a movie in which one man attacks another with a hawk, putting his eye out, and then later has his own hand lopped off by a sword.

Still, the movie is under two hours long and, even if it’s not an essential part of any of the stars filmography, it’s certainly inoffensive.  At the very least you can get a look at the sort of film that was making big money in the late-1950s, at a time when Orson Welles’ A Touch of Evil couldn’t avoid being butchered by a studio.

[1] In truth, the method style of acting would really start taking tons of Oscars until into the 60s and beyond.

[2] Depending on your appreciation of nostalgia

[3] So maybe she played a little role in her husband’s death?