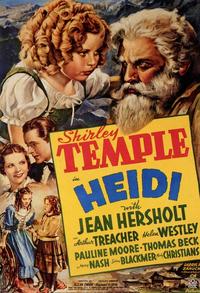 Written by Julien Josephson and Walter Ferris, from the book of the same name by Johanna Spyri

Shirley Temple is probably the proto-child actor.  Her, or Jackie Coogan.  One of the other.  But really, just Shirley Temple, if only because she set the standard for how a child actor’s career tends to go.  Get in the business almost at birth, make it big at a young age, only to see that career stall irretrievably at the brink of adult hood, when puberty turns the cute little kid into something the general public can’t handle, i.e. sexual.

But making it big doesn’t really explain Shirley Temple’s career at all.  No, she didn’t make it big – she made it BIG.  Temple was an international star by the time she was 5, won a Juvenile Academy Award by the time she was seven, and by some metrics was the top box office draw of the years 1935-1938.[1]  Literally, everything Temple appeared in printed money, to the extent that when she did The Little Colonel in 1935 nobody cared her co-stars were Lionel Barrymore and legendary song-and-dance man, Bill ‘Bojangles’ Robinson.  Nor did they care a little white girl was dancing with a black man at a time when lots of people were not even remotely cool with that.  They only cared it had Shirley Temple in it, Temple-ing it up. 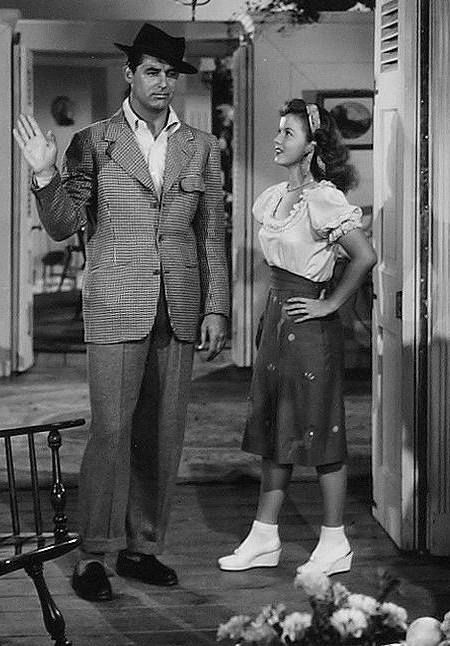 Her later career was in politics.  She was an active Republican and ran for Congress in the late-60s, but while she made a good showing in the election, one suspects she didn’t prevail in part because her screen persona clashed too hard with the right-winger she became.  That said, she did manage to become a diplomat under three different presidents.  So, while this story could have ended in a tragic death, a la Dana Plato, this turn of events actually represents a happy ending for Temple, notwithstanding the loss of the acting career she had to suffer to have it.

Heidi (Shirley Temple) is an orphan, sent to live with her grandfather, Adolph (Jean Herscholt), somewhere in the Alps.  At first, Adolph is uninterested in taking the child, mostly because he’s old and set in his ways.  But Heidi is charming and wins him over.  Later, the Aunt who sent Heidi to live with Adolph essentially kidnaps Heidi back and sells her into the home of a wealthy family in Frankfurt, where she’ll be the companion of a crippled girl.  Heidi is not on board with this turn of events and eventually her agitation to get away leads the governess in the home to try selling Heidi to gypsies, where she’ll then disappear.  Literally.  Fortunately, the sale is stopped by the police and Heidi is reunited with her grandfather.

Reading the plot description above, which seems complicated and involved, you’d think there is much drama to be mined from the story.  And you’re right, there is much drama to be mined here, if only this movie was interested in that.  Which it is not.  Rather, this take on Heidi prefers to make the plot seem as slight as gossamer and to exist solely as a vehicle for the antics of Shirley Temple.  Which antics be those, you ask?  Acting adorable, precocious, precious, determined, and occasionally tearful.

In fact, so determined is the film to its own slightness that the first 10 minutes of this 88-minute film rest solely on Temple puttering around her grandfather’s cabin, being charming and cute and stubborn and little else.  To be fair, this part of the film is pleasant to watch, in a watching-people-do-their-thing sort of way.   Where Heidi literally just has a thing to do and does it.  Sort of like Liz Taylor’s opening scene in Butterfield-8, only stretched to feature length.  Which is kind of what the Robert Redford movie, All is Lost, is about.  Except, none of that happens here and after that first 10 minutes the film settles in for 78 minutes of not much.

That all said, it is a bit refreshing is the film is fairly dark.  Sure, the resolution is saccharine as hell, but leading up to there is the whole plot of kidnapping and selling to families and gypsies, which is very fraught, even for an earlier-Hollywood kid’s film.    Realistically, though, I suppose the darkness in the film is the draw – to see Shirley Temple threatened by a difficult circumstance, only to pull through and see another day. 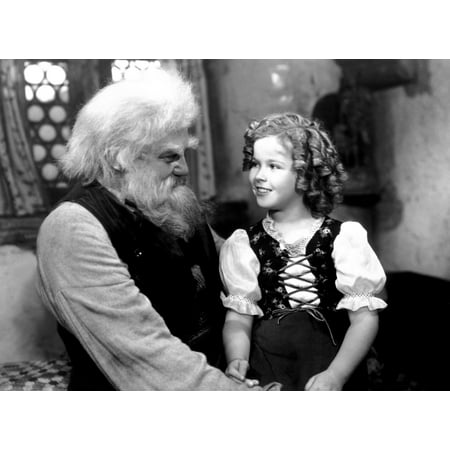 If you’ve ever heard the name Jean Hersholt before, it’s probably in connection with the Jean Hersholt Humanitarian Award given out at the Academy Awards from time-to-time.  It was named for a real man named Jean Hersholt, an actor who spent a good deal of his career in service to the motion picture industry.  In fact, Hersholt was so well-known for his work that he actually won two honorary Oscars himself for doing just that.  And while the Hersholt Award is certainly a nice award to receive – it’s the same Oscar, just given a different title – some recipients, like Jerry Lewis, were pretty quick to point out that this award didn’t exactly carry the same weight as a regular Honorary Oscar, given it honors the person for their charitable works generally, not for their film career, no matter how exclusive this group is.[2]

Anyway, seeing the actor they named the award for in action here as Grandpa Adolph, was a first for me, and I wish I could say Hersholt was a good actor.  Sure, he’s serviceable, just not especially good.  His role seems to call for a certain amount of depth and gruffness that he can’t quite bring, and when he should look reluctant to take the kid, he merely looks skeptical.  Then, a second later, he’s on board.  It’s serviceable, but hardly memorable.

Sidney Blackmer has a small role here as the wealthy father of the crippled girl who takes Heidi in.  This role actually plays like a bit of a precursor to Blackmer’s later role as Roman Castavet in Rosemary’s Baby.  After all, in both films he plays a man intent on stealing some child for his own ends: here it’s as a playmate/companion for his crippled girl, while there it was to unleash pure evil on the world.  So basically the same, I guess