In cinema circles as of late, you hear a lot of complaining about how Hollywood doesn’t make films like they used to anymore.  These days it’s mostly in relation to how movies have become nothing but overhyped theme park rides – specifically, Marvel theme park rides.  And that movies for thinking adults just aren’t in Hollywood’s wheelhouse any longer.  If we’re honest, this is probably a complaint that’s been going on for the entire life of cinema, as one generation is always intent on sneering at the generations that follow it, arguing they are somehow doing things ‘wrong’.  But I digress.

This also further ignores the reality that even back in the ‘good ol days’, when the men who owned the studios were at least nominally interested in art, they were far-more-interested in making a profit.  Which is exactly what the publicly traded corporate entities of today are interested in.  And in a world where movies like The Avengers are putting a billion dollars into studio coffers, the $100 million that might be returned by films like Once Upon A Time in Hollywood just aren’t really going to cut it in the long run.  In the movie space people vote with their dollars and, unfortunately, they’re voting for Marvel, not for The Favourite.

The curious thing is that while people complain about this sort of thing in respect to movies, they never make this complaint about TV.  At this point it’s well-agreed that we are in the golden age of television, where it’s never been better than now.  Artistically it’s incomparable.  Choice wise, it’s incomparable.  And if you want to see where adult entertainment is king, look at TV – there are very few Marvel-type shows on TV these days, because they just don’t have the same bang as the indefatigable NCIS.

But in at least one respect, it is true that Hollywood doesn’t make films like they used to – and there is no point arguing this – is in respect to religious movies.  In the old days, the studio churned out Biblical stories, and Biblically-adjacent stories, on big budgets, with regularity.  Hell, studios made them event movies.  After all, Ben-Hur and The Ten Commandments were massive financial undertaking, and were massive financial successes – that’s why they did them.  But even beyond event movies, they were just making religious movies, like Becket and The Nun’s Story.  This was a particularly strong genre that probably peaked in the 1950s, but continued on in many ways through the 1980s – we covered Agnes of God in The Also-Rans Project.

These days, though, if you want a religious movie, you have to find it independently.  That’s where The Last Temptation of Christ was made, that’s where The Apostle was made, that’s where all those terrible Kirk Cameron movies were made.  And if the studios make a religious film, they do it on the down-low, marketing it either as an uplifting story of human triumph – not a God triumph[1] – or as a horror story[2].  And the reason they don’t make these movies is not because they don’t make money – most of them do.  It’s that they don’t make enough to justify the built-in controversy and the associated risk.

A simple French girl, Bernadette (Jennifer Jones), has a religious vision.  Then, at the site of her vision, a spring comes forth from the ground, burbling water that seems to have healing properties.  Because of their skepticism, local law authorities and church leaders try to expose her as a fraud.  But Bernadette holds firm in her vision and eventually builds up a sort-of following.  But she doesn’t want a following, she just wants to be herself, and eventually she joins a convent, where she gets sick and dies. 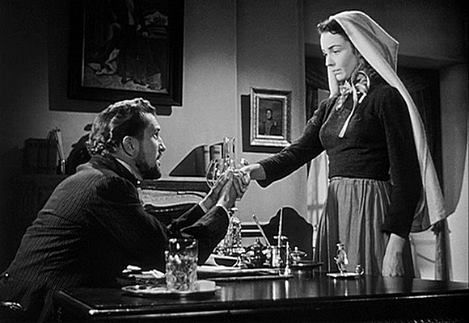 Jennifer Jones plays Bernadette, a role that her patron at the time, and later husband, David O’Selznick, helped her secure.  No, this was not a case of Charles Foster Kane promoting his untalented wife Susan Alexander Kane as an opera singer, because Jones would finish her career with five Oscar Nominations, i.e. she had talent.  But it’s obvious that his help was not unwelcome.

For playing Bernadette, Jones won the Oscar for Best Actress, besting another star in this series, Jean Arthur for The More the Merrier.  And while I’d like to be here telling you Jones is a revelation and gives a tour-de-force performance, the truth is that while she’s properly angelic and simple – as the role calls for – she’s only just okay.  Being believably stupid and devout is fine, but those alone are not enough.  By that I don’t mean I need her to be the ‘most’ actress, though it would certainly make for a fun movie.  Rather, ‘best’ actress hints at something ineffable in a performance that Jones just doesn’t have here.

Of course, some of coolness to Jones’ performance may be laid at the feet of the film itself.  After all, the film tells a simple story – a woman has a vision, people are moved by the vision, and she is persecuted for it because of the movement – that does not play out at simple length.  If this movie were 105 minutes long, and efficient in the story, that would be one thing.  Under those circumstances Jones’ performance would certainly play well.  But at 155 minutes the movie is repetitive, obvious, way-too-long, and instead of showing Bernadette as angelic, it shows her as being tedious and hardly worthy of the story.  In essence, the movie makes a classic biopic mistake which is, than distill a life story into a smaller package by focusing on truly discreet parts, it tries to cram all the big life events into an overstuffed package.  Only, in this case, the package is dull.

But just because I complain about the length and the performance doesn’t mean there isn’t something here to turn up for.  After all, the cinematography by three-time Oscar winner Arthur C. Miller is pretty stellar.  Working with a high-contrast black and white he manages to create a film that feels epic in scope, yet intimate in focus all at the same time.  He deservedly won an Oscar for his work on this film.

Also, this film has an early-career Vincent Price playing the well-meaning prosecutor who winds up the villain of the piece.  Unlike his later roles in garish horror films, Price is mostly subdued here, yet still manages to carry the menace that would follow him later.  Part of me wishes he were much more over the top here, because that’s what we really like to see in Vincent Price – I really like a good, scenery-chewing Vincent Price.  But, another part of me is glad he is rather subdued, because it proves he was actually a great all-around actor and not just some ghoul.