A courtly outlaw, Ben Wade (Glenn Ford), robs a stagecoach in rural Arizona.  In the robbery, the stage driver winds up dead.  When a posse is formed to catch the outlaw, a local rancher, Dan Evans (Van Heflin), agrees to join.  Only, after the outlaw is caught and it’s decided to take him to a neighboring town to be put on the train to Yuma, the posse chickens out.  Bluntly, they fear Wade’s gang will kill them.  The only one who sticks is Evans, who really needs the $200 he’s being offered for the job.  The question is: will Wade make it to the train, or will Evans be killed before finishing the job?

In terms of story, 3:10 to Yuma plays like a variation of High Noon.  It’s about a lone man facing off against an outlaw without the backing of the people and doing it against a ticking clock.  Yes, Yuma gives the story some different contours than Noon, but it’s essentially playing with known material.  It might not be as artful as some presentations of the material, but it’s at least efficient in telling a straightforward story that satisfies.

As the outlaw, Glenn Ford plays against his usual type.  In a previous entry of this series, The Fastest Gun Alive, he played a sweaty, tortured, reluctant hero – reluctant, yes, but still the hero.  That performance seemed overwrought, if generally truthful.  And of course, he was the hero.  Here, though, he plays the opposite.  He plays a self-assured villain, a solicitous and even honorable man.  Or as honorable as one can be when their line of work is thievery.  He’s weathered, and cool.  His Ben Wade would never sweat.  To that end he tries to pull off his robberies without any fuss or death, and when one of his men actually shoots the stagecoach driver in the opening scenes, that man immediately faces his own harsh punishment from Wade for it.  And because Wade is so cool, he’s able to tread the line between charm and malevolence with little problem, and always maintains his confident edge, even as his goose looks increasingly-cooked.  And, to top it all off, his character gets laid.  Inarguably gets laid.  See, when Wade arrives in town he immediately puts the moves on the barmaid, easily charming her.  The scene ends with him kissing her, before cutting away to something else that’s happening elsewhere at the same time.  When we cut back, Wade and barmaid are emerging from a backroom at the bar, with a sizeable grin on his face.  It’s obvious what they’ve been up to.

There can be no doubt – Glenn Ford fucks. 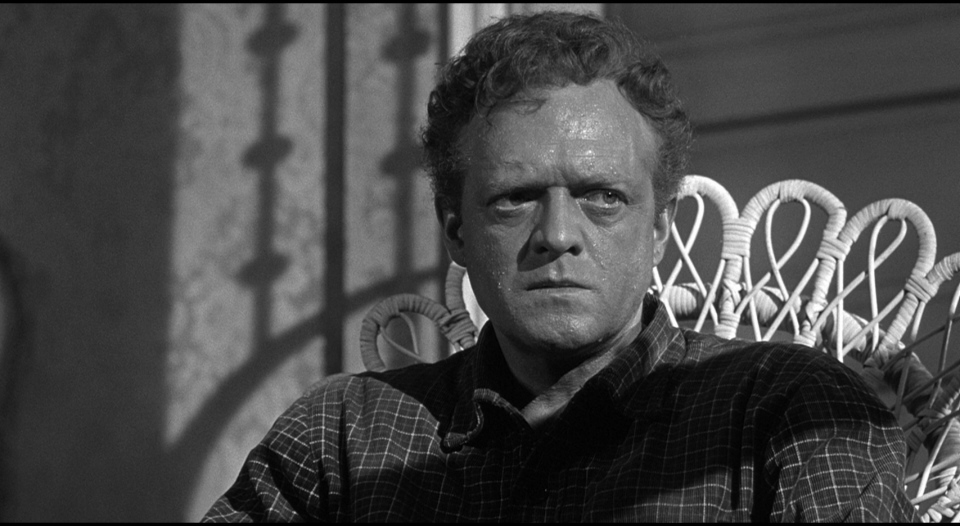 Van Heflin plays the hero of the film, Dan Evans, a down-on-his-luck rancher who only takes the job at all because he needs the $200 offered to him to pay for water rights for his cattle.  That money is the only thing standing between him and utter failure and ruin for his family, and so Evans doesn’t merely need it – he needs it.  In the role Heflin is sweaty and conflicted and is certainly capable of being tempted by the outlaws promise of more money if he just looks the other way and lets the bad guy go free.  And even if Heflin doesn’t bring a lot of nuance to his portrayal, he does well-enough with what he has that he’s believable.

It’s worth remembering that Heflin closed his career with his appearance in Airport.  In that film he plays a down-on-his-luck husband who is going to blow up an airplane, with him in it, in order to secure his wife an insurance payout.  And while he does detonate the bomb, it only kills him.  Which means Heflin ended his Oscar-winning career[1] by blowing up.  He literally went out with a bang.

There is a scene where the men are riding out of town and Potter (Henry Jones), the town drunk, looks back and says, “I wonder if I might see my wife from here.”  Another man with them says he couldn’t possibly, to which Potter replies, “That must be why I feel so good.”  Classic.