The auteur theory of filmmaking is premised on the notion of a film having a single author.  That despite all other efforts from others contributors, including the screenwriter, there is ultimately just one person who ‘authors’ the film.  Usually, that person is presumed to be the director, because he is the one on set directing the action, placing the camera, and interpreting the script into a form that eventually winds up on film.

The auteur theory was originally proposed by film critics in France in the middle of the 1900s, almost as a way to individualize what is in essence a collaborative medium.[1]  But even as the theory explicitly discounts the collaborative, there are times when one person can be the true artistic voice behind a project, dominating all other inputs by virtue of his/her influence on it.

Alfred Hitchcock is the ur-text of auteur-directors.  His films are singularly his own and carry a unified vision from one to the other in terms of theme and interest.  No matter the studio behind it, no matter the story, Hitchcock films were uniquely his own – his stamp was all over them.  Even so, since Hitchcock had to exist in a commercial space he was certainly compromised by his choices to some degree: his films had to make money.

Which is why Stanley Kubrick is, to me, the single greatest example of an auteur, because his work almost seems to exist wholly separate from any commercial interests.  If his films made money, it seems almost accidental, mostly because he operates so fully outside what everybody else was doing that he almost comes from a different world.  And yet, varied as his films are, from Barry Lyndon, to A Clockwork Orange, to Eyes Wide Shut, you can see a thematic and visual through-line in each of them.  The closest modern analog to Kubrick is certainly Paul Thomas Anderson.  A filmmaker who makes works distinctly his own, without reference to box office, much to the chagrin of his backers, but a boon to film fans.

Now, if we accept the auteur theory of filmmaking, where one single voice is the singular author of a film, then we should also accept that the voice can be more than that of the director.  In certain instances you can see it as the star of the movie being the author of a film.  Where that person was so instrumental in putting the entire production together, from finding the script, to finding the director, to finding the story, whatever, that he controls it.  Tom Cruise and the late-series Mission: Impossible films are the best examples of a star-as-auteur, which show his influence all over them.  Occasionally writers are auteur level, especially in the case of Paddy Chayefsky and Aaron Sorkin.  Men who wrote movies in such a distinct style and way that there really wasn’t much choice in how to present the material on screen.

But if we’re honest, the original auteurs were the producers in the studio system.  David O’ Selznick might be the grandest of them all.  Yes, there were directors on his films, but there can be no doubt he controlled everything about them – O’ Selznick is not famous for his memos for nothing.

Which brings me all the way around to this film, Wuthering Heights.  Despite being directed by William Wyler, the recipient of three Oscars for Best Director,[2] the very last credit to appear onscreen in this movie is not Wyler’s, but producer Sam Goldwyn’s.  That his name appears last should tell you beyond a doubt that this is his movie, front to back, and Wyler was merely the director.

In rural England, early 1800’s, the wealthy landowner Earnshaw (Cecil Kellaway) takes in the orphan Heathcliff, and raises the boy with his own children, Hindley and Cathy.  Over time, Cathy and Heathcliff fall in love, while Hindley is spiteful.  As adults, Heathcliff (Olivier) bristles at Hindley’s (Hugh Williams) spite, bristles at being rejected by Cathy (Merle Oberon) in favor of Edgar Linton (David Niven), and so goes off to seek his fortune.  When he comes back as a man of means he uses all his power to enact his various revenges on Hindley, Cathy, and Linton.

Hindley Earnshaw (Hugh Williams) views himself as being old money and so has no chill for somebody of a lower class, like Heathcliff (Olivier), moving into his house, or in on his sister

Cathy (Oberon).  Cathy has her own pride so that, despite being charmed by Heathcliff, and attracted to him, she’s too in love with the idea of marrying upwards, that rather than marry for love, she marries Edgar Linton (David Niven).  And both of these folks are punished for their pride: Hindley is destroyed by his spendthrift and alcoholic ways, while Cathy is psychically poisoned by a marriage she’s never been truly devoted to.

But at the same time, Heathcliff effectively destroys himself spiritually, by carelessly marrying Linton’s sister (Geraldine Fitzgerald) and allowing her to languish while he focuses only on his need to revenge.

In many ways, Wuthering Heights is a film of layers, with lots to consider.  If only the form of the film around it were better, which is to say that while the story has subtlety, hardly anything else does.  Because this is a movie about emotions, everything is performed at a near fever-pitch, with the dialog not so much spoken, as declared.  Indeed, that’s really the modus operandi of the film: declaration.  To it’s detriment in most ways.

That said, Olivier and Oberon have clear chemistry but it’s more of the hate-sex variety, given the story is that neither had an ounce of affection for the other.  But that’s often the case in these situations, where hatred translates onscreen as lust

Fitzgerald is beautiful and charming as the Linton sister whom Heathcliff marries callously, and while she’s good in the role, the character is the very definition of a doormat.  After all, she plays a woman who marries a man she knows loves somebody else, then allows herself to be continuously humiliated by his affections elsewhere.  And when it’s clear his only interests are Cathy and his petty revenges against Hindley, she just rolls over and shows her belly.  In short, she plays the type of woman who’d be abused by a husband and then make excuses for why he had to hit her. 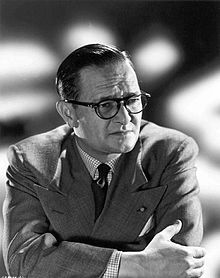 The film was shot by Gregg Toland, which won him his only Oscar, despite having done Citizen Kane, which is monumentally influential in the history of cinema.  That said, it’s fair to land an Oscar here.  While the work might not be on the same level, or influence, as Kane, he does manage to make California a compelling visual double for England, and indoor shots a compelling doubles for outdoor shots.  It might not be his best work, but it’s certainly fine in its own right, and really highlights the sort of magic we can get from the movies.

[1] Not that there aren’t also true auteur films, where one person is largely responsible for everything.  But films like El Mariachi don’t come around that often and so are ignored here for the moment.

[3] For the record, Wuthering Heights is the name of the Earnshaw house.