Stormy Weather is not a movie to be evaluated on the usual good/bad scale you might apply to other movies.  That’s because it’s hardly a movie.  Rather, it’s more a musical/variety revue committed to film, held together by loosely related skits that form the ‘story.’  And because it’s not really a film, it should come as no surprise that no character in the film truly has an arc.  No difficulties are overcome.  No lessons are learned.

That all said, I don’t want the film to feel like I’ve slighted it, or disliked it, because I did enjoy it.  Stormy Weather is good-natured, and good-humored, and undoubtedly ingratiating.  And while nobody in the film is particularly good at acting, they excel at putting on a show.  To a man/woman, the cast knows how to perform, and they show real chemistry and charisma with each other, and the camera.  Moreover, they seem joyful in their work.

That last fact, the joy of it, is often something musicals forget to include.  As if they’ve forgotten that seeing people doing their job well, and enjoying it, can be as important as any other part of the performance.  And really, that’s the explicit thesis of this movie – that the joy of performing is everything and is perfectly reasonable as an avocation.  So that joy onscreen is also thematically on point.

Because most everybody here is a song-and-dance professional, the singing and dancing are fantastic.  No, there aren’t any of those grandly choreographed Busby Berkeley ensembles, and the film is not shown in technicolor, so it’s not some gaudy beast.  No, it’s definitely operating in a humbler space.  Even so, there is still size to the numbers, both in staging and in the vocals, even if they are usually shot in a way to make them feel very intimate.  As if the viewer is not interacting with a crowd, but with just that one person.  Better, because the cast is entirely made up of black faces, and black voices, it’s truly a chance to see people on screen you otherwise wouldn’t see in mainstream Hollywood films of the time.[3]

In a movie so focused on the music, and not on the story, it’s no surprise Stormy Weather generally efficient in moving from place to pace, squeezing nearly two dozen bits of variety into it’s 78 minutes.  And yet—

And yet, efficient as it is, the filme still feels a bit long at 78 minutes.  If there were more plot to hold it together we might accept the film being a little longer than it is, because you’re so involved in the story.  Without it, the film tends to run out of dramatic steam at around the 60-minute mark, meaning the last 18 minutes drag a bit.  Just when the film should be hitting a crescendo, it lingers, and because the story doesn’t have a plot to resolve, it’s not surprising that the film just ends.  Hits 78 minutes of run time, as if that was all it was paid to do, and then is done. 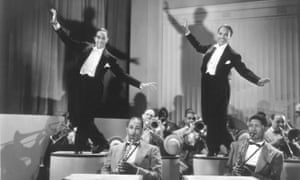 Look, in a movie with Fats Waller singing and playing a piano, and in the same movie with Cab Calloway doing his thing with such verve and energy, it’s hard to say anybody else could be the standout.  But for me, the most impressive sequence was the dancing of the Nicholas Brothers.  They come into the show late on and do this dance up some stairs, then fling themselves down another set step-by-step, dropping into the splits on each one as they come down.  The sequence looked painful on its own, with two men essentially landing on their testicles over and over again, and that they could do that was impressive.  More impressive was that they were jumping over one another to do it, had such power and control in their legs not to hurt themselves, and still looked joyful.  Too often we look at big men with muscles and think of how impressive it is they got that way, but we never look at dancers – lithe little men and women all – and realize the training and power that goes into making them able to do such things is just as extensive as the work some swole bro put into himself.  And maybe it’s time we started.

While every face in front of the camera for this film is black, everybody behind the scenes was white.  Which means that the shadier elements of the film play as especially racist, because it’s very likely they were hatched and put into the film by white people.  And don’t talk to me about the white people being absolved of the shadier bits because the black people still had to perform it, as if their participation is necessarily an endorsement, because that’s a strawman argument and ignores the structural inequality that makes those things happen.

Anyway, particularly offensive to me were the costumes and makeup on the performers in the the cake walk sequence; the minstrel singers on the riverboat; the comedy stylings of a pair of black men who perform in black face; and, especially, Lena Horne’s ‘Diga Diga Do’ sequence, which features the stereotypical ‘savages’ we find in less-enlightened movies about Africa.

[2] The one real comedic standout is Dooley Wilson as Bill’s friend, Babe.  In the movie Babe is a big spender, short on money, who manages to milk all the humor from that sort of person as he possibly can, without letting the character turn into a boob, or a caricature.

[3] At least not in leading roles.