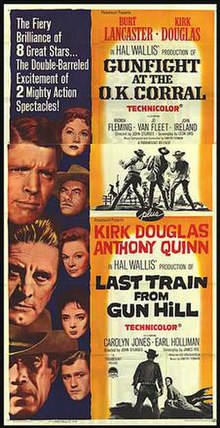 Written by Leon Uris, based upon a story by George Scullin

Anyway, the point is while I knew he had a long career, I didn’t really make the connection that it was 50 years long until he popped up late in this movie – Gunfight at the O.K. Corral – as one of the Clanton boys, to be shot down at the O.K. Corral.  And the only reason that fact registered on my radar at all was because I’d just seen Once Upon A Time In Hollywood.

See, during the last sequence of that movie, the main character, Rick Dalton (Leo Dicaprio), confronts a would-be murderer and makes a derogatory remark about him, calling him ‘Dennis Hopper’.  Upon my first viewing of the film I laughed, thinking the movie was making this joke to call out Easy Rider as a timely reference to the cultural consciousness of 1969, when Once Upon A Time In Hollywood takes place.  And, because Rick Dalton has no chill for hippies, it’s a timely burn.

Except on rewatch of Once Upon a Time in Hollywood, and upon watching Gunfight at the O.K. Corral, it occurred to me that while Easy Rider was big in the national consciousness of 1969, Dennis Hopper had a much larger footprint in Hollywood, extending back to the mid-1950s.  After all, he  was friends with James Dean, co-starring with him in Giant and Rebel Without A Cause.  He was in True Grit[1] and Hang ‘Em High.  He was in Cool Hand Luke and The Sons of Katie Elder.  He was in a ton of TV.  My point?  Hopper was a known quantity in Hollywood and there’s some argument to be made that his career at least informs Rick’s career in Once Upon A Time in Hollywood.

What all this means is that, while I laughed the first time Rick Dalton made that crack, as being nothing more than a reference to the cultural zeitgeist, the second and third and fourth time I saw Once Upon a Time in Hollywood I came to realize that in the world of the movie Rick Dalton had to have known Hopper – they were both doing a lot of westerns, so it’s not unheard of – and had to know Hopper was a hippie weirdo.  Which means Rick’s zinger of calling somebody ‘Dennis Hopper’ is not just some shallow nod to the zeitgeist, but a nod towards a specific person he knows.   More subtly, it’s a nod towards a zeitgeist he increasingly does not understand, one that embraces a weirdo he’s known for years, while his own career flounders.  The joke then is not a zinger, but an admission of his own alienation and dissatisfaction with his career. Wyatt Earp (Burt Lancaster) is a famous lawman, plying his trade in a variety of western towns.    Along the way he forms a bit of an uneasy alliance with the scoundrel/gambler Doc Holliday (Kirk Douglas).  Each has a bit of a love story, Earp with a gambling woman, Laura (Rhonda Fleming), and Holliday with a woman clearly coded as a prostitute (Jo Van Fleet).  In the end, Earp’s history with the Clanton family comes to a head and is settled in the early morning gunfight that provides this movie it’s title.

To be blunt, Gunfight at the O.K. Corral is a middling film, told episodically, that runs too long.  The film’s main stock-in-trade is hollow posturing and tightly clenched jaws, but no amount of either can distract from the fact that this film is nothing more than a melodrama, dressed up like an action film, and fails at being both.  It fails at melodrama by having the wrong pitch to it’s tone.  It fails as an action movie by basically avoiding much action.  In the grand scheme of John Sturges’ career, this is a lesser effort, lesser even than Bad Day at Black Rock, which at least had the courage to run 30 minutes shorter.

Douglas plays Doc Holliday as a mostly-scoundrel, but generally good guy.  Where Val Kilmer really leaned into the Holliday illness story line in his portrayal in Tombstone – So Pale!  So Coughing! – Douglas plays Holliday as a man who barely coughed a day in his life and looks pretty fucking healthy, thank you very much.  While this choice is confounding – Holliday really did suffer from a tough strain of tuberculosis – the real confounding thing in Douglas’ performance is that he’s too much his usual self in the film.  Or, the film is too little Douglas in the other performers.  Think of it this way – Douglas is essentially a scenery-chewing type, who excelled at desperation.  He was big with his face.  And he does all those things here, which is a problem, because nobody else does.  If the movie were toned the way Douglas plays the film, it would be interesting, in a not-quite-campy, but almost there sort of way.  But, because everybody else is pretty low-key and deadly earnest, Douglas sticks out like a sore thumb, in all the worst ways. 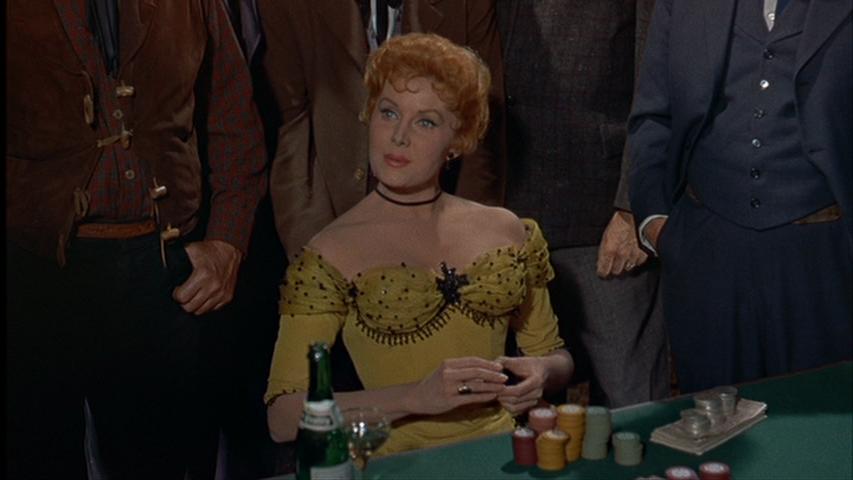 Just a note is that Rhonda Fleming plays Earp’s love interest, Laura.  I’d never heard of this actress before this fiulm, but was struck by just how beautiful she was on screen.  Wikipedia tells me she was called the “Queen of Technicolor” for how good Technicolor made her look, and believe me, they weren’t kidding.

By the way, the cast of this film is deep.  You already know Burt Lancaster and Kirk Douglas are here.  So is Jo Van Fleet, Rhonda Fleming, and Dennis Hopper.  Also?  Whit Bissell, Earl Holliman, John Ireland, DeForest Kelly, Lee Van Cleef, and Jack Elam.  How insane is it to think that Jack Elam, and a baby-faced Lee Van Cleef are in this movie, and then only just barely?

[1] Where his co-star, John Wayne, was said to have pulled a gun on him.