Written by Russel Rouse and Frank D. Gilroy, based on Gilroy’s teleplay, “The Last Notch”

Broderick Crawford winning Best Actor for All The King’s Men (1949) is probably one of the stranger choices to win an acting Oscar.  Not strange in the sense he was an actor of limited range,[1]because many Oscar winners have limited range.[2]  Which is a less-backhanded way of saying that winning an Oscar is not usually proof of an actor’s quality.  If anything, winning an Oscar is merely ratification of the zeitgeist in the moment, and is also why the Oscars are essentially meaningless and good acting cannot truly be appreciated in the moment.

No, good acting can only truly be judged through the remove of time, and while Crawford was probably a sure-fire winner for All The King’s Men at the time, 50+ years on it looks like a mistake.  And what makes it a mistake?  Could be the fact that he has to overcome Kirk Douglas, Gregory Peck, and John Wayne to win his Oscar?  Sure, but more is that in All The King’s Men, as in every other Broderick Crawford movie, you are never truly able to lose yourself in the story because you are always hyper-aware you are watching a Broderick Crawford performance.  And that hyper-awareness isn’t because Crawford was such a big star, a la George Clooney, that you struggle to separate Clooney the part, from Clooney the man, even when Clooney is doing something completely different, as in Burn After Reading. [3]  Rather, that awareness is because no matter what he does, Crawford is only ever a guy who can do one thing: Be Broderick Crawford.

Given all this, how exactly did he win that Oscar?  In a nutshell, he did it by matching his skillset to the most perfect part for it.  So his win wasn’t so much as he showed he could act in any way, because he was only ever doing the same thing he always does – the bullying blowhard who’s about as deep as a mud puddle.  Rather, he managed to fall ass backwards into a perfect situation and seems to prove the old adage that even a blind pig roots up a truffle once in a while.  Except, I don’t even think Crawford is remotely good in All The King’s Men, so while other people see a truffle, I see a rock.

And here, in this movie…?

Well, we’ll get there.

A short-tempered outlaw (Broderick Crawford) is singularly obsessed with being the fastest gun alive.  Amongst his bag of tricks is chasing down so-called quick-draw guys and killing them under dubious circumstances that usually result in him evading criminal punishment for what is essentially murder.[4]  Except, being an outlaw eventually catches up to him and he finds himself evading a posse.  Elsewhere, a mild-mannered merchant (Glenn Ford) has been hiding the fact that he’s a quick-draw artist, so as to maintain a peaceful life for him and his wife (Jeanne Crain) – the problem is when word gets out on you being a quick draw, every asshole with a gun figures they have a right to take a shot at you.  Only, one day the merchant decides he’s had enough of the other men in town calling him a weakling and so shows them how good a shot he is.  Naturally, his exploits get out and the outlaw decides on a showdown.  After much angst from the merchant, and the town, the two men meet – merchant and outlaw – and as with anything involving guns, there can be just one winner.

For a film with so many “A” names in it, The Fastest Gun Alive cannot really escape it’s “B” origins.  Without even getting into the plot, the signs are all there: it’s under 90 minutes long, is padded out with a thematically-pointless dance sequence, and is shot on very limited sets.  Still, it does have “A” aspirations, particularly in how it flirts with weightier themes about the seductive nature of violence, and the destructive influence of obsession.  Of course, the movie muddles it’s message on those themes, arguing on the one hand that violence is destructive and the manlier choice is to eschew violence while still deciding the bad guy must be shot – it’s like a sop to both the peaceniks and the hawks.  But though it muddles the message, the film at least recognizes that a capacity for violence can be both a blessing and a curse: blessing in that you get to be good at something, but a curse in that you can never evade it, and it will eventually cut you down.

Glenn Ford plays the nominal lead in this film, and plays it as a sweaty and conflicted.  He’s fine in wrestling with the inner-turmoil of his character, and being deadly earnest, even as he seems overwrought in an annoying way.  Broderick Crawford plays the Broderick Crawford part, which is to say he’s big, blowsy, and one dimensional.  If you’ve seen him before, you’ve seen him here.

From a technical standpoint the film is pedestrian.  The lighting is flat and even, and the film breaks no stylistic grounds.  It’s a rote story, more-or-less devoid of distinguishing characteristics.  If it does anything right it’s in trying to find the characters some grace-notes that add to their depth – Crawford admires the church singing, Ford is careful in hiding his gun in the backroom of the store, and John Dehner[5]  is almost sweet when explaining how the boss, Crawford, is always good to children and dogs.

And yet, even as I knock the film and find it nothing special, my wife was fairly engrossed

When I was mixing up the names of some of the side characters at one point she got mad at me and was like, “Pay attention already.”  This is significant because she generally does not go for westerns, and mostly ignores whatever movies I’m watching with her.  That she was hooked by this one is important.  If nothing else, it proves that people are complicated and occasionally go off-brand, as it were. 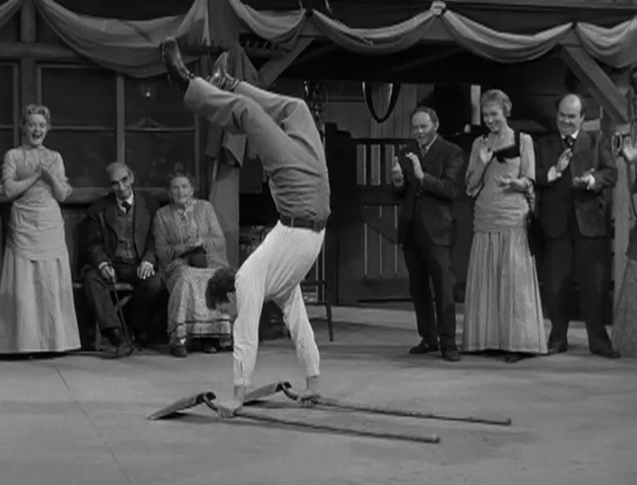 Russ Tamblyn is in this film as some random townsfolk, but it’s obvious he wasn’t in this film for his acting.  Rather, he’s clearly in the film for cheap production value.  Specifically, so he could have a truly energetic, and wildly-athletic, dance solo about 20 minutes into the film, that culminates with him using shovels like stilts and doing some wild flips.  In one sense it was cool to see his dance number – it really is impressive.  On the other hand, in the middle of a dour morality story about the use of violence, it was strange to have the story stop dead to let some rando dance for five minutes, before essentially disappearing from the picture thereafter.  If nothing else, this sequence just shows how it’s possible that Tamblyn’s schtick can be palatable in isolated five minute chunks, but completely deadening when combined into the 100+ minute star vehicle of Tom Thumb.

This film is undoubtedly indebted to other westerns in many ways – honestly, most of them owe something to each other – but this one was more than just thematically-owing.  Rather, this one shares sets in common – or seems to share – sets in common with other films.  Two examples:[6]

[2] This does not even mention the ‘gimmick’ Oscar winners of Jean Dujardin for The Artist, Roberto Benigni for Life is Beautiful, and Linda Hunt for The Year of Living Dangerously.  I suspect it won’t be many years down the road before Rami Malek is thought of that way for Bohemian Rhapsody.

[3] This is unlike a huge star like Brad Pitt, who I am constantly losing in roles.  Even after seeing Once Upon A Time In Hollywood in theaters for the fourth time – Four Times! – I was only ever seeing him as Cliff Booth, and not Brad Pitt.

[4] It’s the equivalent of picking a fight with somebody, then shooting them and claiming you were standing your ground and so should not be punished.

[5] He plays a gang member riding with Crawford