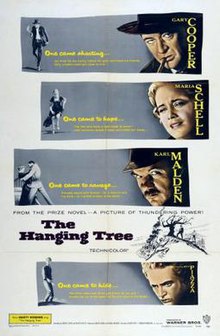 Screenplay by Wendell Mayes and Halsted Wells, from the novelette of the same name by Dorothy M. Johnson

Gary Cooper was a movie star of the highest order, with a career lasting something like 35 years, coming up as an extra and even appearing in the first Best Picture winner, Wings.  Career longevity aside, though, he always felt like a wooden actor to me.  Of course, being a movie star, and being a good actor, are frequently two different things: acting requires the ability to act, being a movie star is more about charisma and charm than anything else.  And it almost feels idiotic to argue he was a wooden actor, given he won two Oscars, and was nominated for three others, so somebody thought he had skills.  But I say he was a wooden actor, and so he was.

But maybe before I call him a wooden actor I should probably define my terms.  I don’t mean wooden in the same way that Keanu Reeves can always feel wooden when playing a Brit, where he’s paralyzed by having to work through an accent in real time and in the process deprives his acting centers of the necessary bandwidth they need to do their jobs.  Which is more situational-woodeness than anything.  After all, Reeves is a natural in Bill and Ted, and he seems natural in John Wick, he seems natural in Point Break and Speed.  Hell, he seems natural in Always Be My Maybe.

No, I mean Cooper is wooden in that he comes across like a literal block of wood.  In most every role he plays he is largely the same – same manner, same speaking pattern, same inflection.  That is literally the truth of Gary Cooper – he is a block of wood that cannot be changed.  He’s best playing men who seem emotionally distant, or were closed-mouthed, or were ramrod-straight and principled.  In other words, he’s an Oscar winner for High Noon and Sergeant York, and not for more romantic roles, like Love In The Afternoon.

After saving a thief (Ben Piazza) from being hung by a posse of vengeful miners in a mountain town, a doctor (Gary Cooper) coerces the man into being his servant.[1]  Shortly thereafter, an immigrant woman comes to town (Maria Schell), badly injured and temporarily blind after being robbed on the trail and left to the elements.  The doc and the thief nurse her to health, and also try to protect her from creepy prospectors who can’t see a woman without wanting to rape her.  This includes Frenchy (Karl Malden), who is the one who found her on the trail to begin with, and so feels entitled to her body as a reward.  Strangely, after the doc declines her romantic interest – in spite of his attraction he thinks she needs to go back to her people in Europe – she partners up with the thief,[2] and Frenchy, to work a gold claim.  Eventually the claim breaks big and in the heat of the gold fever Frenchy tries to rape the woman, greedy miners seem to take issue with the thief, and a religious zealot (George C. Scott) takes his opportunity to burn down all the places of ill-repute, and to get some sort of revenge on the doctor.

The Hanging Tree is a strange film, at least in terms of tone.  Because it’s called The Hanging Tree you get the promise of death by hanging, which pre-bakes the story with tension.  Hang ‘Em High would later come freighted with the same sort of notions.  Except, before we see anything else here, we are treated to a jaunty Marty Robbins song over the credits.  For me, Marty Robbins will only ever be the guy singing about falling in love with a Mexican girl he met in the west Texas town of El Paso,[3] and the title song here, The Hanging Tree, has the same sort of romantic/easy going vibe about it.  Which immediately starts the film on a weird tonal foot that in never really reconciles.

But while a weird tone is one thing, the film suffers most by failing to properly identify the villains and heroes until almost the very end.  Up to that point, everybody takes a turn at playing bad, with varying degrees of good sprinkled throughout.

Early on, Cooper seems to set himself up as the villain of the piece, essentially forcing Piazza to be his slave for saving the man from a posse, but it isn’t too long before Cooper turns tender is his doctoring of Schell.  Then, when Schell is healed and ready to strike out on her own, Cooper absolves Piazza of his debt when Piazza aims to strike out with her,[4] essentially telling the man he could have left at any time.

Obviously, Piazza plays villainous at the beginning when he’s thieving, and in his rageful resentment of his position vis-à-vis Cooper, but when Schell shows interest in Cooper over Piazza, he doesn’t turn his vengeance on her.  Instead, he becomes more like a big brother to her, turning to protect her from the harm of others.

Malden vacillates wildly from hero to villain.  Yes, he saves the woman’s life early on, and starts the film as comic relief, literally howling into camera when the doctor (Cooper), lances a boil on Malden’s ass, but soon he’s ready to rape Schell as some sort of reward for saving her life.

The only one who never feels villainous is Schell, but that’s because she’s too busy playing the virginal love interest, and pining after Cooper.  And the one who never feels truly heroic at all is George C. Scott, who is more an agent of chaos than anything else.  But because his character is so slight and tangential to the film, he almost doesn’t register for most of the runtime, and is such a non-entity, that it’s hard to consider him a villain.  After all, if the characters in the film literally pay him no mind, there’s no reason we should either.

One the one hand, the inability of the film to determine who is the hero, and who is the villain, makes all the characters play a little more complex.  After all, in real life even the worst people you know are more than just their worst qualities.  This is how everybody can be the hero in their own story, even if they are the villain in your’s.  The problem in The Hanging Tree, though, is sometimes it seems like you’re not only watching your story, you’re watching everybody else’s, too, and by making everybody the hero and the villain, the film effectively takes no stand and has no point of view.  This is in contrast to other films, like The Good, The Bad, and The Ugly, where in their own stories all three of those men are the good guy,[5] but because the movie is essentially Clint Eastwood’s story, and from his point of view, he’s the one who’s ‘redeemed’, whereas the others remain varying degrees of bad.  In the end, the lack of a point of view makes The Hanging Tree feel confused and uneven.

Beyond that, there are some nits to pick.  With respect to hygiene, most everybody seems fairly clean and uncluttered in the movie, despite the film taking place in an off-the-beaten-path mining town in the 19th century.  In fact, so strange is the hygiene in the film that when Malden, Piazza and Schell actually go out to work their claim, only Malden shows any hint of sweat/dirt/lack of shaving on his face.  Hell, Schell looks like she never even lifted a tool.

The other nit to pick is over the sound of Cooper’s dialog.  I don’t know how the recording technology worked back in that day, but there were many times in the movie where Cooper’s dialog seemed too crisp for the environment and disconnected from the rest.  Almost as if his dialog was rerecorded, making him loud enough to be heard, but also stripping it of feeling organic to the moment.

[1] This is basically the plot of the episode of Seinfeld where Jerry and George write the show about the judge ordering a man to become another man’s butler to repay a debt of some sort.

[2] The thief has since been released from his bond to the doctor.

[3] The song is literally called “El Paso”.  Amazingly, not only was Marty Robbins a successful country singer, he drove in 35 NASCAR races over 13 years.  Insane.

[4] Piazza’s aim is more to act as protector than love interest, because by then he’s figured out the woman doesn’t really see him in a romantic light.

[5] They may play the good guy in their own stories, but in truth they all show varying degrees of villainy.  Each is inclined towards easy money, even if it means robbery.  All three kill many others, and even our hero, Eastwood, leaves another man to die in the desert, simply because it’s financially expedient.