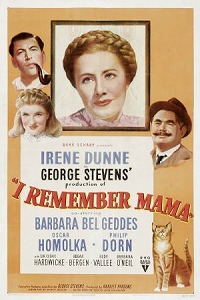 George Stevens might be one of the most underrated directors in history, which is sort of an insane thing to think about a man who has two Oscars for Best Director.  But ask anybody to name ten directors working before 1960 and you’d probably not hear his name mentioned once.[1]  He might not even be in the top 20.

Part of the reason for being overlooked is probably due to not having won a Best Picture with any of his films – two Best Directors, no Best Pictures.  For good or bad, it’s the winners of the big prize that endure, not the others.  And so, George Stevens is overlooked.

Beyond this, I think he’s overlooked because, while he was an intensely competent director, he wasn’t really known for doing this thing or that thing, like Hitchcock.  He wasn’t a director who played in a certain sandbox, or with a certain style, or even in a consistent genre, and so didn’t explore it to greatness.  After all, I suspect that some of John Ford’s success must surely owe to making a lot of films in the western genre, giving him many more opportunities to perfect it.[2]

No, Stevens did not pigeonhole himself as any specific type of director.  In the beginning he was doing comedies, then went to war and worked on documentaries, then came back and turned himself to more serious work.  Weepies, tragedies, epics.  By being a jack-of-all-trades he was truly a master of none in every way.

Of course, even as I write this, I think this is unfair.  There should be no downside to stretching yourself and, aside from his perception by history, Stevens was quite successful in stretching himself.  Whether you know it or not, George Stevens had an insane career, doing Alice Adams, Gunga Din, Woman of the Year, A Place in the Sun, Shane, Giant, The Diary of Anne Frank, and this entry, I Remember Mama.

A slightly-comic, but ultimately heart-warming memory piece about a poor, hardworking Norwegian family in 1910 – mother and father were born in the old country, all the kids in America.  They muddle along as best as they can and we get a sense of their day-to-day tribulations, showing us that no matter what crisis or celebration they encounter, they remain a close, bonded family. 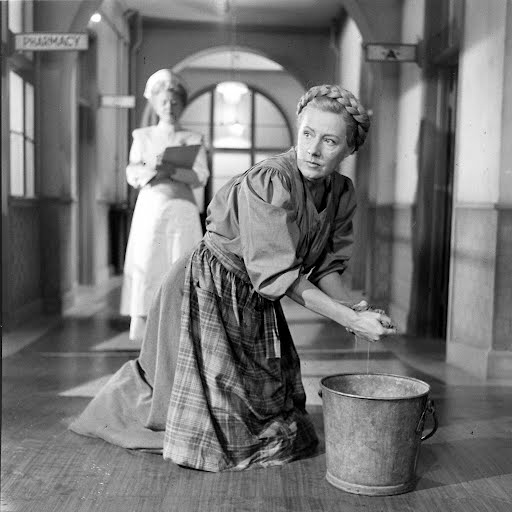 I Remember Mama is best described as an epic of the small.  The film is shot plain, and almost matter-of-fact, devoid of the magisterial sweep and wide open vistas Stevens would later bring to Shane and Giant.  Yet, it does not feel plain, and it does not feel small.  And at somewhere around 150 minutes, it also is not dull.  Yes, the subjects are small, and the focus is on life’s little tragedies and little pleasures, but in making a movie about such things, the film does not talk down to them.  Rather, it treats them the same as you would a grand vista.  It’s oxymoronic to call something an ‘epic of the small,’ but that’s an appropriate way to consider this film.

Because the movie can’t distract you with scenery and sweeping camera moves, I Remember Mama will have to rely on the story – which is episodic – and the ability of the actors to put it across.  It’ll rely on chemistry more than another film would.

Irene Dunne plays the mother here, a sturdy Norwegian woman holding her family together as best she can.  In the role, Dunne is great.  Where another actress might focus on the tensions of being a poor immigrant, and suffering those humiliations, Dunne is pleasant in the face of them, which is an appropriate way to be, given she plays a woman trying to protect her children from the stresses of those humiliations.  And because the film is I Remember Mama it stands to reason that Dunne dominates the film – she is the hub around which it all revolves.  Better, the film accepts that she is a 50-year-old woman and so lets the age be seen in her eyes, rather than trying to glam her up a bit.

Barbara Bel Geddes is almost as important to the film.  Where Dunne plays the ‘Mama’ of the title, Bel Geddes plays the ‘I’.  We enter the story through her, and she is a good ambassador.  She plays well as the audience surrogate.  Sometimes that sort of character can seem dense and obtuse, but here Bel Geddes plays her as knowing just enough so that we don’t have to be beaten over the head every other minute with unneeded exposition – her Oscar nomination for this movie was thoroughly deserved.  Most surprising about Bel Geddes is how insanely young she looks.  If you only knew her from her later part on the soap opera, Dallas, you’d be forgiven for not realizing she was once a young woman.  Here she is that woman.

The rest of the cast works well with these two.  Phillip Dorn is good-natured as the father, content with his coffee and pipe.  The actors playing the other children, while having short careers, were believable.  Oscar Homolka as uncle Chris gets to play broad and comic and silly and pompous, but also caring.  In the end, the cast meshes well and it’s no trick to believe they are family, and also one whose story is worth telling.

If I had one gripe about the film it’s that because it’s a memory piece, based upon a story written by one of the characters in the film, there is the inevitable narration of the story by Bel Geddes.  In one sense it’s not very intrusive – it’s kept to a minimum.  In another sense it’s completely intrusive, because rather than merely speaking over the story to narrate, Bel Geddes appears as the older version of her character several times, sitting in a chair and looking directly to camera as if reading the story to us.  Honestly, I was not a fan of this choice.  It got worse when the film ended with the character in the story reading the beginning of the story that Bel Geddes started reading us at the beginning.  By having the character in the story read the story itself it truly made the film seem as if it were eating it’s own tail.

In an earlier entry in this series I mused how it seems everything in this series comes back to It’s A Wonderful Life, because every time I turn around I’m finding somebody from that film in some other film.  In most cases it was accidental – at least, in the case of those films that didn’t star Jimmy Stewart.  In the Jimmy Stewart movies the connection was unavoidable.  Well, this movie was the first film, other than the Stewart movies, where the connection was intentional, as I specifically sought it out.

Ellen Corby plays the mousy Aunt Trina here, the woman in her 4os who manages to find love with an undertaker who’s almost as mousy as she is.  It’s a nice role for her, a little on the showy side – as much as a mousy performance can be showy – and Corby is enjoyable in it.  Obviously, her performance struck a cord with some folks because she was Oscar-nominated for it, the sole Oscar nomination in her career.

In It’s A Wonderful Life Corby plays Mrs. Davis, another patron in the run-on-the-bank scene who asks for $17.50 in withdrawal and is kissed by George Bailey for seeking such a small amount.

Interestingly, this would not be the last time Corby would be in a film with Barbara Bel Geddes.  They both later appear in Alfred Hitchcock’s Vertigo.  In that film Bel Geddes plays a would-be love interest of Jimmy Stewart, and alleged schoolmate, despite Stewart easily being 20 years older than her.  Which means either Stewart was held back at school a record number of years so they could be in college together, or Bel Geddes was insanely advanced and did college as a toddler.  Anyway, Corby plays in a small role there as the manager at the hotel Kim Novak’s character is alleged to have a room in.

[1] Honestly, I’m not sure many people could even name ten at all.  Knowing directors and writers of the era seems more a thing for cineastes than the general public.

[2] To be fair, his non-western films are also good.