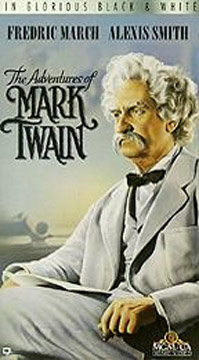 Is Mark Twain a great novelist?  That seems the single question asked by this film, which is purportedly Twain’s life story.  Given the movie about Twain is asking the question, it’s no surprise it answers that, yes, he was a great novelist.  And, though Twain does not start writing in earnest until maybe 30% of the way through the film, after moving from one successful career to another – riverboat pilot to newspaperman – if we did not come to the same conclusion, then what was the point of making a movie about him in the first place?

But, this film also have a smaller question lingering in it, which it whether or not Twain qualifies as one of the all-time greats.  The problem with Twain’s writing?  He’s a humorist and writer of ‘low’ fiction, which works against him in the grand scheme of ‘great’ writing.  On the other hand, he sells a boatload of books, and can that many people be wrong?  In the end the film decides he is an all-timer, using an honorary doctorate given to him by Oxford University in England as proof.

One-hundred years on from his death, it’s easier to say Twain was a great novelist.  He’s still very well-read, still incites controversy for his appropriate-to-the-time-and-place-but-otherwise-ouot-of-step-with-the-here-and-now language of his novels, and they still adapt his work into other mediums even today.[1]  Better, he’s not merely known today for one book, as folks like James Fennimore Cooper, Nathaniel Hawthorne, or Herman Melville.  Rather, he’s known for many – The Adventures of Tom Sawyer, The Adventures of Huckleberry Finn, A Connecticut Yankee in King Arthurs Court, The Prince and the Pauper.  Moreover, reading his books is not the slog many of his contemporaries heaped upon us, but are mostly pleasure.

The best place to start if you wanted to read him?  Right there at the beginning with his very first story, The Celebrated Jumping Frog of Calaveras County.  Because of it’s age, you can find free versions of it all over the internet.

The life of Mark Twain, from birth to death, divided in a half-dozen or so episodes, beginning and ending with the return of Halley’s Comet.

Before getting into whether this film is good or not,[2]  we should start with a trigger-warning for anybody inclined to see it.  If seeing either (1) old-school stereotypes of black people, which are plentiful here, or (2) any amount of blackface onscreen, which also makes a brief appearance, offends you at all, this movie is not for you and can easily be skipped.  Unlike Gone With The Wind, where you need to overcome the racial connotations in order to see a generally great film, this one is far from essential.  There’ll be no harm to your understanding of film history in skipping the whole damned thing.

Beyond that, because the film is episodic, your mileage of the film will vary, depending on your appreciation of the various pieces.  Broadly, they are:

To my eye, most of the episodes are tedious.  And by most, I mean all but one – Going West.  Where the others strive for various things – depth, action, romance – the Going West sequence is straightforward, in a roundabout way.  It’s also the only part that’s out-and-out comic.  In it, our hero goes west seeking adventure, fails at gold mining, becomes a newspaperman, and starts a writing career.  Among his encounters is a literal run-in with a frog jumping contest, which ends much the same way as The Celebrated Jumping Frog of Calaveras County, and inspires him to write that story.  But, because the story is decidedly silly, and low art, he puts Mark Twain on it, not his real name.

Fun as the segment is, the secret weapon of it is John Carradine as the owner of the reigning frog jump champion.  Normally, Carradine’s features seemed to peg him as a weirdo or a creep, and his tone of voice never helped him break beyond that.  But here he’s cast as a dandy, and is quite convincing in playing the hubris and ego of a defending champion.  Just as convincing is his incredulity at his frog’s failure.  He’s quite literally a delight.

But I don’t want you think the film is bad because it’s episodic, because that’s not entirely it.  Gone With The Wind is also episodic, but is a good film.  The reason, I think, is it has a unifying through line – Scarlett’s pursuit of Ashley.  It’s the one clear objective of her character throughout every episode, culminating in the realization she really loves Rhett.  Yes, other things might happen, but very specifically the plot, and her arc, is that love story.  It’s the thing that binds all the episodes together.  And that’s where The Adventures of Mark Twain goes wrong – it has no analog to bind its parts together.  Instead, it is truly a collection of episodes, tacked end-to-end, without anything really pulling them into a whole.  This is why you can have such an excellent episode like Going West, practically drowned by everything else around it.

You might be able to give the film a pass if Fredric March were better in the film, giving an uber-magnetic performance as Twain.  Except he doesn’t.  His performance lacks the dynamism, and magnetism, to hold our interest and overcome the film’s flaws.  He might be good elsewhere, but here he’s just too dull by half.  Worse, the makeup he wears seems to be working against him most of the time.  For at least half the film he’s playing a man much younger than himself, but the makeup on him fails to hide the age in his eyes.  Which means every time I should be looking at him and losing myself in the story of a young Mark Twain, I could only be reminded of the old man trying to pass himself off as young.

Perhaps more blameworthy, though, is Irving Rapper’s direction, which feels like the work of a studio director, but in the worst way.  Sure, he gets the film done, but isn’t artful about it.  And that seems to be about the best you can say for Rapper’s career – he was an artless manager.  Yes, he had a good relationship with Bette Davis and made five films with her, but outside Now, Voyager, nobody would call those essential.  Easily his best film has to be The Brave One, a genuinely good movie about a boy and his bull.  But while the film is good, and works as an implausible fairy-tale rooted in real life, it’s probably best known for two pieces of trivia: (1) it won the last Academy Award for Best Story before the category who discontinued, which went to Robert Rich, and (2) Robert Rich was the pseudonym used by Dalton Trumbo, who was suffering under the Blacklist at the time the film was made.

All roads lead to one film in this series if you look hard enough.  And I didn’t have to look hard enough here.  There’s a small bit with a pickpocket early on in this film, with the pickpocket played by a man who’s face I recognized right away.  And who wouldn’t?  After all, not only did he play the pickpocket here, he also was uncredited as Ed, one of the patrons making a run on the savings and loan on George Bailey’s wedding day in It’s A Wonderful Life.  There he plays Ed, the guy George calls out for not having lost his home when he was out of work.[3]  The actor’s name was Ernie Adams and while he has something like 459 IMDB credits, it’s not surprising most of those were uncredited.

[1] A modern twist on the adventures of Tom Sawyer and Huck Finn was released in 2015, called Band of Robbers.  Amongst the supporting players are Melissa Benoist (TV’s Supergirl), and Hannibal Burress (TV’s Broad City and 30 Rock)

[2] The TL:DR version of this entry would be: Middling-to-poor

[3] Being called out for it in the lobby of the Savings and Loan by George, in front of 20 other people, seems like an intense privacy violation.  Of course, since racism was cool in those days, maybe this sort of thing was, too.