Sydney Falco (Tony Curtis) is a New York City press agent, desperate to place items about his clients in J.J. Hunsecker’s (Burt Lancaster) gossip column.  Just a mention there carries enough weight to make, or break, a career, which explains all the anxiety and jockeying for position that follows Hunsecker.  But while Falco and Hunsecker usually have a shark-and-remora relationship,[1] Hunsecker has lately frozen Falco out, insisting Falco be the hatchet man ruining the relationship between Hunsecker’s little sister, Susan (Susan Harrison), and the guitar player, Steve Dallas (Marty Milner), who Hunsecker has no appreciation for.  As days go on and the end does not come for Susan and Steve’s love, Hunsecker grows vicious toward Falco, pushing Falco even deeper into his desperation.  Eventually, both men hit a version of rock bottom

Many of the films passing through this series have been good.  They have flaws, of course, which is what separated them out from inclusion in my other series, The Best Picture Project, and The Also-Rans Project in the first place.  Something that kept them off the top shelf, even as they were nevertheless enjoyable.  Half-way through it now, I can think of only having three outright duds.[2]  Similarly, there’s only been two confirmed-by-me classics – The Shop Around the Corner, and The Sweet Smell of Success.

What’s interesting about Success being a classic is how dark it is, and how sleazy it feels.  Indeed, sleaziness is the very first thing you get from this movie, which is appropriate given it’s about gossip and insinuation and playing to the lowest-common-denominator.  But you get that feeling even before a word is spoken, largely because of Elmer Bernstein’s score, which sounds as if it’s performed by one of those little three-piece bands you’d see in a down-market burlesque club in the 1950s.  Where there’s a lousy comic between acts, and the band is there to give us the ba-da-bums and the cawing saxophone.  The moment the score comes in over the main credits you can feel the cigarette smoke and the bad intentions of everybody you’re about to meet.

Matching the sleaze of the score is Tony Curtis as Falco.  Curtis is undeniably good here, even if I’ve only really known him before this for three roles: Harry Houdini, the slave in Spartacus, and in his Cary Grant-aping-turn in Some Like It Hot.  In other words, to me he was an actor who coasted on good looks, ability to play light, and unforced charm.  Who somehow managed to play a slave in Spartacus without bothering to suppress his accent, which was probably not period appropriate.  Here, though, he plays an entirely different sort of fiend, and fiend is the right word.  Tony Curtis’ Falco is a man driven to all-out desperation most of the time – even in the moments of his greatest bravado he’s thick with desperation.  A man always at the edge of outright failure, who’s really trying his best to get out of it, even if he can never cut enough corners to get away from it.  It’s a role that on the page should read as sweaty and, even if you don’t see Curtis sweat, you still feel it rolling off him.

But while Curtis is good, Lancaster is great.  Younger, he seemed to play men shading mostly-heroic, but as he got into his 50s he used his age to transition into cynics and opportunities.  He excelled at middle-aged-malaise.  But don’t assume that Lancaster plays J.J. Hunsecker as a neutered dog, because there is danger in him.  And given the way the film sells Hunsecker to us, there has to be danger in him.  After all, like Harry Lime in The Third Man, Hunsecker is kept offscreen for quite some time, being built up into the other characters as being somehow mythic and feared.   The reason that approach works in The Third Man is the same is works here: the actor playing the role is up to playing that mythos.  For all his success at playing malaise and opportunism, Lancaster ably sells Hunsecker’s hubris, and makes Curtis’ fealty to him believable.  But the best part of Lancaster’s performance is he knows there is a thin line between ingratiating and menace, and he rides along it like a champ until the tension is oppressive.  But like his later turn in The Swimmer, Lancaster isn’t playing a man who only exists onscreen.  Rather, he’s playing the sort of man you’d meet in real life, which is what makes him terrifying.

Stylistically, and thematically, the film ultimately plays a trick on the audience by setting up Susan’s boyfriend, Steve Dallas (Marty Milner), as a hothead asshole.  He’s set up as being insufferable and loathsome.  Who deserves what he gets.  But even as the audience begins to believe Steve is gauche, and the villain of the film on some level, the truth is he is probably the only virtuous character in the film.  What he speaks is what we all should be feeling, because he’s the one speaking truth amidst the sleaze, and even as the film makes us feel like he deserves what he gets, he’s the one we should treat as a hero.  That we don’t is an indictment on the audience that is rarely encountered on film.

The film has great cinematography, playing well in the cramped spaces of the offices and clubs of New York.  The best shot of them all, though, is when Falco goes out and encounters Hunsecker for the first time, where Hunsecker is sharing a table with a Senator, a young lady, and another press agent.  Hunsecker is playing pals with the Senator, just chatting it up, and seems in good spirits.  But it only takes a moment for him to lay down the law with everybody at the table, when he says to the Senator that, “Now here you are, Harvey, out in the open, where any hep person knows that this one, is toting that one, around for you.”  In that moment Lancaster doesn’t point, or raise his voice at all, to make is point.  Rather, the camera does it for him, starting on the press agent, then swinging across the girl, and finally to the senator.  It’s a small moment, but it’s the one that sticks.

The Sweet Smell of Success is a cynical masterwork, driving by a pitch-black heart, the kind of film cineastes look back on fondly, while still recognizing there is no way it would be made today.  And how could it?  The 1950s saw other bleak, cynical films from top directors lose boatloads of money – Ace in the Hole[3] and A Face In The Crowd[4] – and if two of Hollywood’s biggest stars couldn’t stop this film from losing money hand-over-fist in 1957, what chance does it have today?  If it somehow was made, this is the type of film that gets an arthouse release – at most – before dying on VOD.

About the only chance a cynical, black-hearted film ever had to make money was to either dabble in genre filmmaking – Invasion of the Body Snatchers – or be made on such a low-budget it couldn’t lose money – The Last Man On Earth. 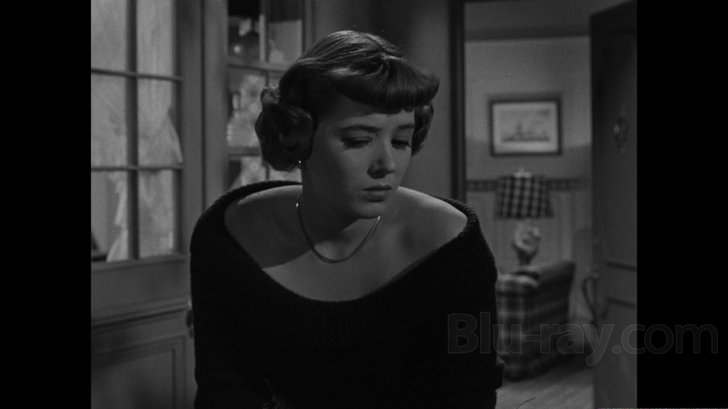 Jeff Donnell in In A Lonely Place

Jeff Donnell – Jeff is a nickname – plays Sally, Sidney’s secretary.   Even though she was in her mid-30s when this movie was made, she has a certain fresh-faced look about her, a certain sweet, but knowing, naivete.  The kind of look that might get you places, if you had the right breaks.

Donnell’s most notable role up to, and after, The Sweet Smell of Success, was probably as Sylvia Nicolai, Brub’s[5] wife in Nicholas Ray’s ultra-caustic film, In a Lonely Place.  There, as here, her sweet look is used to good effect, and in at least one scene there they put her in a little black number that really makes her look a delight.  In other words, in spite of her innocence, she could look alluring.

Better, Donnell was a good actress, with sympathetic eyes and a light smile and believability.  And she was just memorable enough that as soon as she popped up here, I picked her right out.

Good as she is, and memorable as she is, though, Donnell never broke big.  Perhaps it was she looked too innocent, or not sexual enough for the times.  Or, perhaps it was she looked more like a woman who’d play the wife, not the lover, that did her in.  Or, maybe she just didn’t get the same push others would.  Whatever the reason, while she’s quite good in her limited time in these movies, it’s clearly a tough job making it even semi-big in films when a woman of her talent can’t pull it off.

The irony is that here she’s playing a small part in a movie that’s all about success being manufactured in spite of talent.

[1] We’re led to see Falco as the parasite in this situation, but a strong case is made that Hunsecker is the true parasite.

[5] That is not a mis-spelling – his name is literally Brub.