I started reading the book Best. Movie. Year. Ever. by Brian Raftery recently.  The whole premise of the book is 1999 was the greatest movie year ever.  To support this, just look at the lineup of 1999 releases: Fight Club, The Blair Witch Project, Being John Malkovich, Election, American Beauty, Go, Three Kings, Office Space, Eyes Wide Shut, and Magnolia.  And that’s just naming a few.  Which is a murderer’s row of films by any stretch.[1]

Obviously, the reason that book exists – or, least it’s title – is because there are other, mostly-accepted best movie years ever.  The most prominent is 1939, which saw the release of such accepted-classic films as Gone With The Wind, The Wizard of Oz, Goodbye Mr. Chips, Mr. Smith Goes to Washington, Young Mr. Lincoln, Ninotchka, Gunga Din.  Never fear, there are others, but I’m not naming them here.

What does this all have to do with an entry on Destry Rides Again?

Well, look at the year in the line after Destry’s name and you’ll see it’s a 1939 movie.  So, the question that might be answered in this entry is whether the film is a classic that burnishes the reputation of 1939?  Or, is it a pretender? 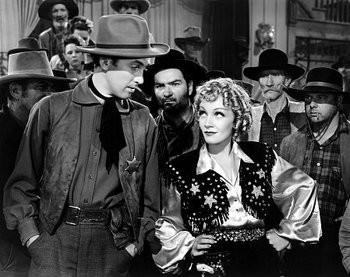 After their Sheriff suddenly ‘leaves town’,[2] the mayor of Bottle Neck, at the behest of a crooked saloon owner, Kent (Brian Donlevy) and his singer/partner, Frenchy (Marlene Dietrich) appoints the town drunk as Sherriff.  Why the town drunk?  Because everybody loves a government official who won’t get in the way of profiteering.  Only, the drunk has ideas about doing the job for real, and so takes Destry (James Stewart), the son of a much-beloved earlier Sherriff, as deputy.  Though Destry refuses to carry guns, he manages to whip the town into shape through good humor and the right amount of causal menace in the ‘parables’ he tells.  Of course, when push comes to shove, he does pick up his guns to shoot the bad guy.  Curiously, though, at the climax it’s a mob of fed up women who roots out corruption in a very direct way, rather than Destry.  The only thing Destry manages to do is shoot Kent, who accidentally shot Frenchy.  In the end, Frenchy dies in Destry’s arms.

In some circles, Destry Rides Again is a classic.  In the Venn Diagram made up solely of me, Destry Rides Again feels a little slip-shod and tedious, unable to thread the needle between playing as a comedy and as a tragedy.  Which is what it really wants to do.  Because it can’t walk that line, or decide one way or the other to just be one or the other, it winds up feeling a bit flaccid and overlong, even though it’s just 95 minutes long.

That all said, the ending of the film, which involves the women of the town rising up and picking up whatever weapons they can find – hoes, rakes, fence pickets – to put down the corruption recalled for me the idea of Lysistrata,[3] at least to some degree.  In that story the women withhold sex from the men to make them end the war.[4]  Here, they take up arms directly and take matters into their own hands.  While it is obviously not a direct comparison, it’s also not that far of a step from how this movie plays with the plot to what Lysistrata, and its progeny, does with theirs.

That all said, while the ending of the film seems to empower women of all stripes, it actually also acts as a complete repudiation of pacisfism.  After all, throughout the film Destry tries to do the right thing, without resorting to violence.  He doesn’t carry guns, he doesn’t mete out vengeance.  He’s always on the side of justice and working within the law.  But while most of the film lets him have it this way, it eventually posits that the only way to deal with corruption is through violence and so, when the bad guys just won’t stop being bad, he has to strap on guns.  It’s a very direct refutation of the almost-pacifism he preaches earlier in the film.

As Destry, Stewart is charming and affable and it’s hard to think of him as anything but a good guy.  And when he has edge, as in a Hitchcock film, it’s usually a desperate, sweaty edge.  Here, though, he manages to project edge and strength in an affable way, which makes his menace all the more palpable, even as it’s so understated.  Another actor in this role might’ve come across as too soft, or too hard – I’m thinking Henry Fonda – but Stewart manages to make it work.  It’s not a much different look from him, but at least it’s another shading.

Also good – and bad – is Dietrich as Frenchy.  On the one hand, she’s sexy and powerful and the men treat her as a person of power generally, not as a weak woman.  It’s almost like what happens in Johnny Guitar with Joan Crawford as Vienna.  In that movie, nobody treats her as weak and in this film, it’s the same.

On the other hand, where it’s bad, is when Dietrich sings.  To my ear, she has a lousy voice and her characterization of the singing is the clear inspiration for Madeleine Kahn’s performance in Blazing Saddles.  Hell, Destry Rides Again is probably the clear inspiration for that whole film.  Watching it for the first time now I could not help but see the connections – drunk appointed lawman, the sexy, foreign ‘singer’, the corrupt land-owners – and how with just the tiniest narrative tweaks Destry Rides Again became Blazing Saddles.

As with all things in this series, you don’t usually have to look too hard at the casts of these films to find somebody who did a tour of duty in the holiday classic, It’s A Wonderful Life.  The most obvious shared actor here is Jimmy Stewart, playing a leading role in both.  But further down are two of his co-stars.

First up is Tom Fadden as Lem Claggett, a landowner cheated in a crooked poker game in Destry.  In It’s A Wonderful Life he plays the toll collector at the bridge who helps pull George Bailey, and Clarence, from the cold river, only to run away later when Clarence lets out he’s George’s guardian angel. 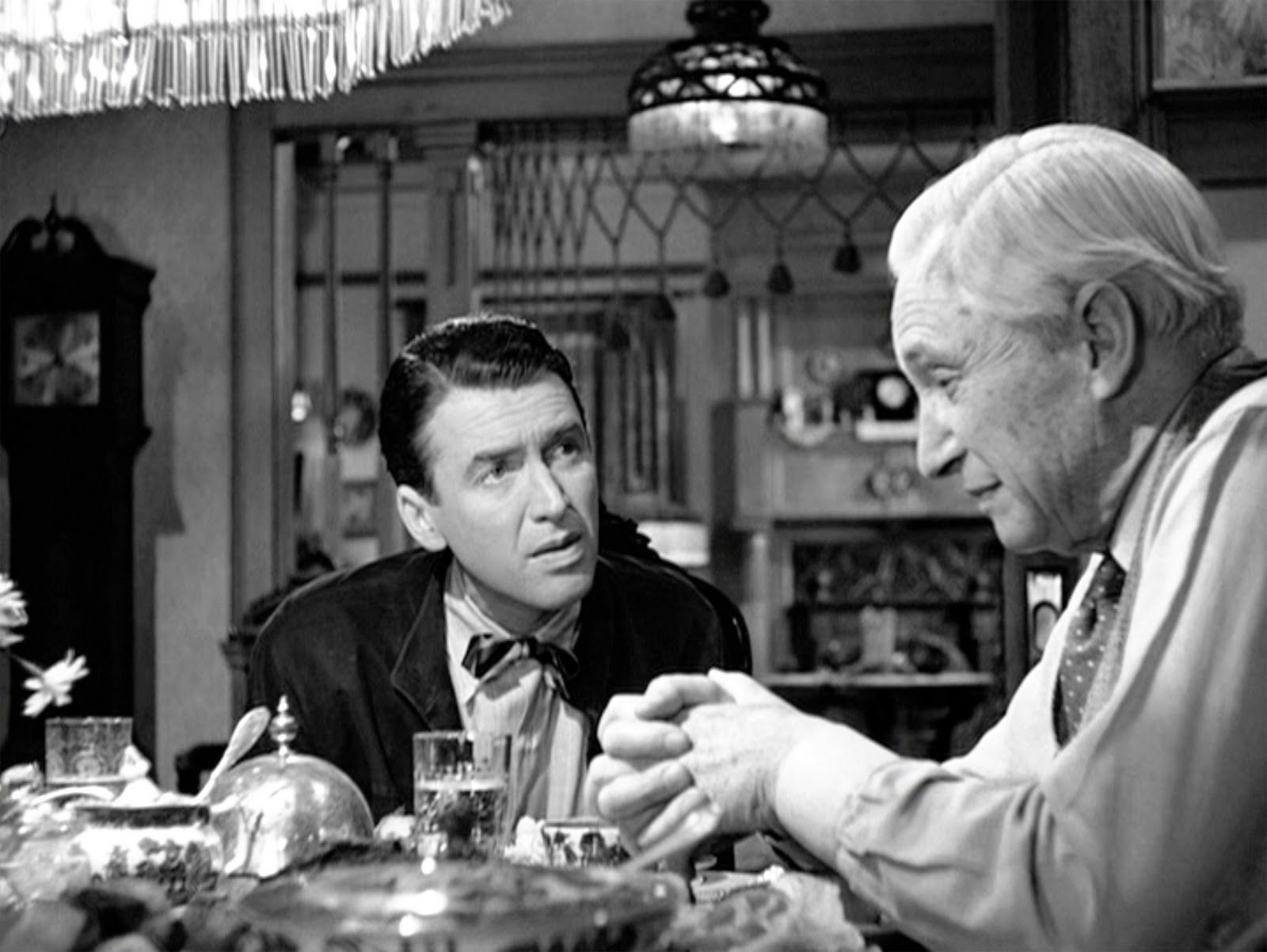 Second up is Sam Hinds, who plays the corrupt mayor here.  He is so casual and unrepentant in his crookedness that his character is risible from the get-go.  In It’s A Wonderful Life he plays a much different role, one who is almost the complete impotent opposite of what he does in Destry.  Specifically, he plays Peter Bailey, George Bailey’s father, who basically dies of a stroke after failing for decades to get out from under the thumb of Henry Potter.

For the second time in this series we run across Jack Carson.  He was previously here in John Loves Mary, where he used his size and good comic timing to steal that movie away from Ronald Regan.  Which, honestly, was not too difficult, given that Ronald Regan is the very definition of bland actor.

In this film, rather than play a goof, he plays a bit of a hothead, employing his size and physical being to be an intimidating presence, even if he ultimately winds up being one more governed by his good sense than by his urge to beat ass.

[1] You’ll notice I did not mention The Matrix, which I think is pretty terrible, is only faux-deep, and people love for the effects, which is problematic given the way special effects seems ready to eat movies alive.  That said, even as I loathe the movie, I’m generally forgiving of the more self-indulgent work the Wachowskis have done.

[2] By ‘leaves town’ everybody means ‘was killed for standing up against corruption.’