Many of my most vivid memories of school revolve around the movies they’d show us when they didn’t feel like teaching.  Most times these would be ‘educational’ films, sometimes not.  And when they were not they’d give it to us as a reward for something or other.  One of the reward movies was Pee Wee’s Big Adventure, which I’ve already talked about being low-level scandalous in the school because Dee Snider and Twisted Sister makes an appearance.  As if watching some glam/metal guys in long hair and women’s clothes would turn us gay or something.[1]   Less of a reward was the old educational program from the 70s, Mulligan Stew, which at least had the memorable “4-4-3-2” song, which occasionally runs through my head without asking even to this day.

In fifth grade they showed us Johnny Tremain, a somewhat historically-dubious Disney show about the revolutionary war that was nevertheless pretty entertaining.   Around the same time we saw the adaptation of Edgar Allen Poe’s The Gold Bug, starring a disturbingly-young Anthony Michael Hall and one of the supporting actors from John Huston’s, Annie, and erstwhile Bond villain, Geoffrey Holder.

In high school they stopped being so concerned about the movies being educational, because my journalism teacher showed us The Breakfast Club – I’m not sure what he even thought that movie was about when he gave into the browbeating of some of the others and just showed it.

All of this is even true of college.  In a pair of American history classes my favorite teacher, Paul Millikan,[2] showed us the musical 1776, and a couple of short films produced by Colonial Williamsburg, The Coopers Craft and Gunsmith of Williamsburg.

Because my memories of these movies are so vivid it should not come as a surprise I have many of them on DVD, or that I watch them regularly to this day – in fact, when we were down in Virginia a couple years ago visiting family we made a special sojourn to Colonial Williamsburg just to buy the DVD’s of those films.

The importance of all of that in this moment is one of my most distinct memories is being shown, from an old 16-millimeter print, the adaption of The Gift of the Magi as contained within O’Henry’s Full House.  I’m not sure why this particular one was shown to us without any of the other parts, and why it was shown to us twice, but it was.  What’s curious is, even though we saw it twice I have no real memory of the fine details of the story, only the broad strokes.  Which means while this particular series is supposed to be about discovering something new, this one’s close-enough to new that I’m willing to make the exception.

As an aside, my other favorite memory of elementary school is my entire second grade year, where my teacher, Mrs. Gilmer, was a piano player and had an old upright in the classroom.  Every morning before we started class she would play and sing to us, the most memorable song being the theme song to Disney’s Davy Crocket.

Five O. Henry short stories are adapted into five separate short films, by five different directors, with five different casts, with interstitial introductions done onscreen by John Steinbeck.  The one thing that unifies them?  A twist, or ironic, ending.  In order the stories are:

As you might expect from a movie with five different screenplays, five different directors, five different casts, and five different sensibilities, O. Henry’s Full House is largely unmoored from any sort of thematic through-line, other than the irony.  Which is not exactly a story arc a person can follow.  Naturally, this makes the overall tone of the film, and the result, uneven, even as it has some pretty good, memorable parts.

Charles Laughton plays the homeless man in The Cop and The Anthem who can’t get arrested and jailed, which will surly feed and house him during the cold winter.  In the role Laughton is funny and charming, and believably gone-to-seed, and the moments he has with an early-career Marilyn Monroe, who clearly plays a prostitute,[3] are nice.  Yes, you see the twist in the story coming from a mile away, but at least it’s all handled efficiently by director Henry Hathaway. 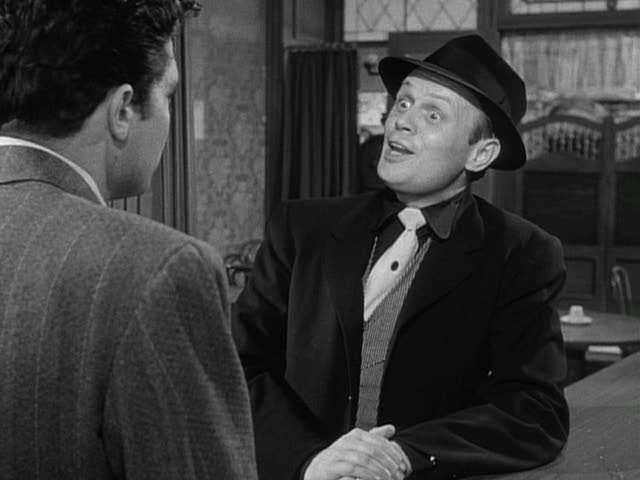 The story of The Clarion Call – a police officer refuses to arrest a murder suspect out of some sort of personal point of pride – is one of the most ridiculous I’ve ever seen.  Plus, it has a deus ex machina ending to save it, which makes it worse.  If only the lead in the story were better at putting it across than the rather bland performance we get from Dale Robertson, then maybe it lands.  But it doesn’t.  The only thing to hold interest here is Richard Widmark, giving a great performance as the bad guy, really doubling-down on the loudmouth loose-cannon aspect of the guy.  Yes, he’s broad as hell, but the level of menace he’s working at is completely believable.  It’s hard not hard to see Joe Pesci channeling his inner-Widmark in Goodfellas.

The Last Leaf is also a bit of a laughable story, making no effort to conceal it’s ridiculousness, with the acting being largely ‘meh’.  Anne Baxter plays a woman with pneumonia, determined to die when the last leaf falls off a vine.  Jean Peters plays her sister.  In the piece neither woman is particularly good, or seems of the time of the story, which is turn of the 19th into the 20th century.  Gregory Ratoff plays the artist who saves Baxter and, while he’s a bit more lively, he’s largely a caricature of the frustrated artist than a real one.  Plus, when they show him painting, he doesn’t actually look like he’s painting so much as waving a brush at a canvas.  Worse, though, is his art is a little on-the-nose, pitched as a sop towards the modern sensibilities of Pablo Picasso and Jackson Pollock, which would naturally be way out of step during the time period of the story.

The most outright comic of all the parts of the film is The Ransom of Red Chief.  This is a very low-key, droll comedy about two con men from the city who hit on a scheme to kidnap a kid from some country folk and ransom him.  Because the country folk are dumb, you see, they’ll be easy marks.  Except, the kid they kidnap is a pain in the ass and nobody is in a hurry to see him returned.  Eventually, the kid proves so burdensome to his captors that the dumb country folk manage to get paid by the con men to take the kid back.  The story is certainly silly and hardly realistic, featuring some of the most stereotypically dumb hicks ever put on film, but at just under 30 minutes long it’s pretty brisk and broad and never wears out its welcome.

The section of the film I’m most familiar with, because they showed it to us in school a couple times, is The Gift of the Magi.  If we’re honest, this is about the most middling of the bunch.  The story is sappy and sentimental, weighed down by a fairly bland, yet somehow over-wrought performance by Jeanne Crain as the wife.  Farley Granger does what he can as the husband.  In the end, though, the story is too sentimental and sappy for my taste.

The strangest part of the movie as a whole has got to be John Steinbeck appearing on camera as the master of ceremonies, introducing each segment and giving us the barest-minimum of biographical details about O. Henry.  I could not fathom exactly why Steinbeck was even in the film, because he’s not known as a famous raconteur, or even recognizable from his many appearances in the same way Stephen King or John Grisham are today.  My guess is Steinbeck was thought to give the film some literary bona fides – I tend to think of Steinbeck as the literary writer for the masses – and because he was always working in Hollywood on some film or other he was probably easy to dig up.  Either way, strange or not it was nice to see that rather than have some random actor show up and lend gravitas to a film explicitly named for a writer, they actually chose a writer.

[1] Obviously I mean this as a laugh line, but I genuinely think that was the fear.

[2] He’s since died.  It was a shame when I saw his obit in the newspaper.  He was such a good teacher that he was probably my wife’s favorite teacher as well.  She took Michigan History with him.  See https://obits.mlive.com/obituaries/kalamazoo/obituary.aspx?n=paul-conrad-millikan&pid=177787680&fhid=8372

[3] Albeit one who’s high-class