Screenplay by Ladislas Fodor, based upon the stories by The Brothers Grimm

If you think about it, George Pal was well-positioned to be a strong rival for Walt Disney.  He received seven Oscar noms for animated shorts he directed in the 1940s, and was even awarded an Honorary Oscar in 1944 for developing the techniques used in Puppetoons.[1]  In fact, one of his cartoons, Tubby the Tuba, was one I watched about a million times when I was a kid, though I’m not sure how.  It seems like it wasn’t on VHS until the late-80s, when I would have been too old for it, which makes me think it played on early morning TV where I lived as either something in the public domain – a la the Why We Fight series – or just a real cheap program to license.  It’s just as possible I’m just simply delusional.

One key difference between Pal and Disney, though, is that after a certain point Disney stopped directing his own cartoons and was simply the producer on them.  Which means while Walt Disney is usually credited as the most-lauded Oscar winner,[2] it’s just as possible he’s a master-level credit hog.  After all, given the volume of product coming out of Walt Disney Studios in that day, it’s hard to conceive him as being all that ‘hands on’.  That said, there is no denying that above all others Disney is the very definition of producer-as-auteur, whose influence is still felt in Disney films more than 50 years after his death.

The other key difference between Pal and Disney is while Disney transitioned to features, and then into TV and theme parks and product tie-ins, George Pal didn’t move into the realm of world domination.  He only moved from directing cartoons to directing live-action films, primarily those driven by special effects.  His most notable feature credit is directing The Time Machine, which is both forward thinking in terms of its special effects, but also horribly dated in terms of its makeup effects and sexual politics. Either way, by now that film’s a bit of a camp classic, and I happen to love it.

The film Pal made immediately preceding The Time Machine?  An effects-heavy adaptation of The Grimm’s Fairy Tale story, Thumbling.

After squandering a trio of wishes given them by the Forest Queen (June Thorburn), a childless woodcutter and his wife (Bernard Miles and Jessie Matthews) are given a son.  Except, instead of a full-grown human baby show up on the doorstep, it’s a fully grown, 4-inch tall Tom (Russ Tamblyn).  Because Tom is so small in full-size world, there are any number of shenanigans and misadventures for him to get up to, including musical numbers with sentient toys.  The biggest shenanigan, though, is when Tom is tricked into robbing the village treasury of it’s gold by two thieves (Terry-Thomas and Peter Sellers).  Eventually Tom’s parents are accused of the theft and are only saved from a literal whipping in the village green by Tom’s timely intervention.

Tom Thumb is meant as a kids movie, and there’s no doubt it probably plays best to children, particularly those whose suspension of disbelief has no limits, and who prefer watching movies in fits and starts, rather than in one shot.  And that ‘fits and starts’ are key, because as separate, discreet pieces, the various episodes of Tom Thumb can succeed as what they are, which is slapstick comedy, musical, [3]  and drama.  In fact, taken as bits and pieces, there’s much that’s ingratiating.  Taken as a whole, though, and subject to that style of viewing, the episodic nature of the film, it’s wild shifts in tone, and the thin story holding all these creaky elements together, falls apart.  In the end, the film is easily too long by half an hour, and dull.

Clearly, though, the whole reason this movie exists is for the effects – one would have to believe it was the special effects challenges which interested Pal, because it couldn’t possibly be the story.  After all, while the story is barely developed, the effects employed to pass off a 4-inch tall man in a regular sized world are constant, and varied.

Credit where credit is due – Pal uses every trick in the book to sell Tom Thumb’s size.  He liberally mixes forced perspective, oversized sets, matte shots, models, and puppetry to put the character across and, to a certain degree it is a success.  Though the effects may be outdated and obvious now, they are on the money for the time.  The problem, though, is there’s only so much mileage you can get out of sight gags of having Tom drink out of a thimble, or use a plate as a button before the gimmick gets in the way and starts to call itself out as a gimmick. 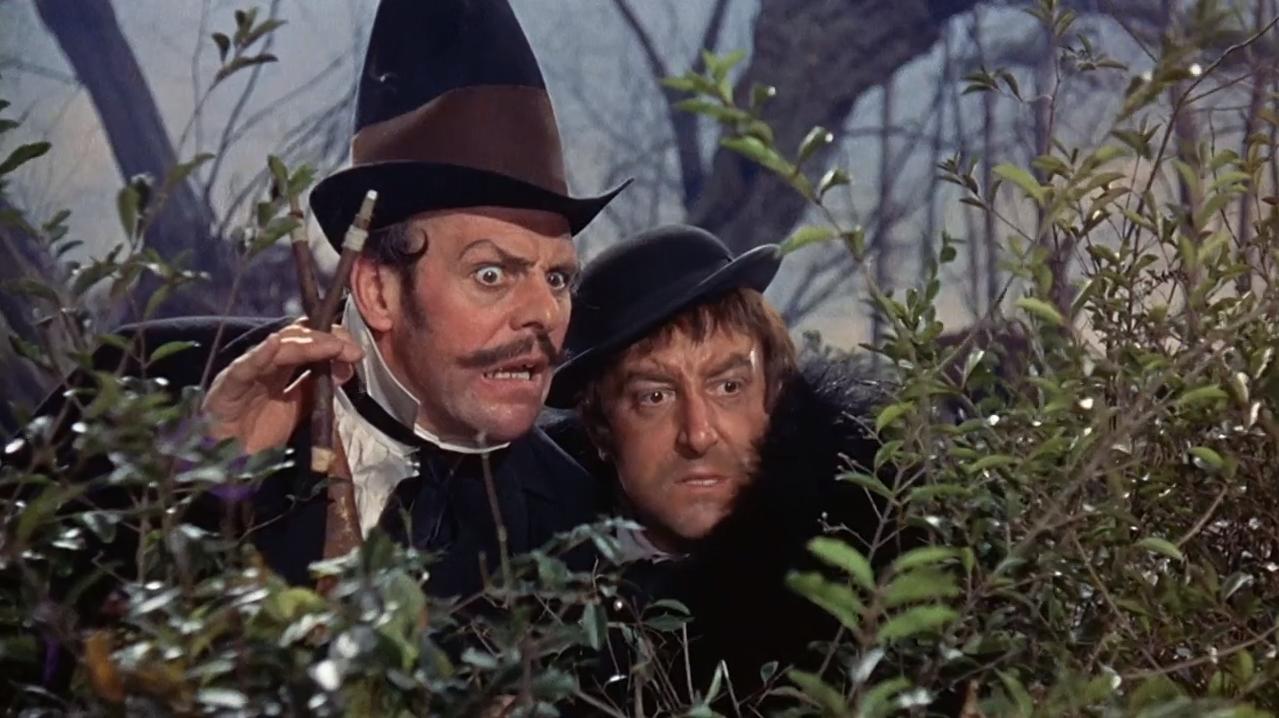 For being a kid’s movie, Tom Thumb evokes some fairly brutal elements, which you wouldn’t expect in a kid’s movie.  At least not a live-action kids movie.[4]

Particularly the ending of the film, which involves what is supposed to be a comedic fight where one of the thieves repeatedly bangs another’s head on the floor.  Considering how many time it happens, I expected blood and death, because the structural integrity of the human skull is not finite.  But thank god this was a kid’s movie, which is not as interested in verisimilitude as other movies might be, because that’s the only reason we avoid a pretty gruesome onscreen death.

But this fight isn’t the all of it, because another part of the ending involves the very-real threat of Tom’s parents being whipped in the town square for a theft they did not commit.  The only thing that saves them from it is some timely turns of the plot.  But again, the implication of the scene is very disturbing, especially in what is meant to be a musical adventure for children.

Why Is There Always This?

It’s worth noting that while Tom Thumb tries to be cutting edge in its use of special effects, it’s very much rooted in a terrible time in terms of its racial politics.  Particularly in the offensive Chinese stereotypes that run through the film.  As badly as it should have played then, it plays even worse now.

[1] Puppetoons was the name given to what seems a more labor-intensive version of stop-motion animation.

[3] A musical with intensely forgettable songs

[4] In the malleability of the animated world, you expect things to be out of whack.