Wyatt Earp (Henry Fonda), and his three brothers (Ward Bond, Tim Holt, and Don Garner) are driving cattle west.  When they stop for a night in Tombstone, Arizona, the youngest brother winds up shot in the back and the cattle rustled.  Now, there’s no doubt this was the work of Old Man Clanton (Walter Brennan) and his sons, but there’s also no real proof.  Determined to hold the killers accountable, Earp sticks around and becomes sheriff of Tombstone, to give him time to get proof.  Along the way he becomes sort-of frenemies with Doc Holliday (Victor Mature), and imposes some law and order on things.  In the end, Earp finds the proof he needs about his brother’s killer, and gets his revenge on the Clantons.

END_OF_DOCUMENT_TOKEN_TO_BE_REPLACED

Screenplay by Leonardo Bercovici and Robert E. Sherwood, based upon the novel of the same name by Robert Nathan

A bishop (David Niven), focused too much on raising money to build a cathedral, and not enough on his wife (Loretta Young) and daughter (Karolyn Grimes), or the Lord’s work for that matter, grows increasingly frustrated with the lack of progress on the project.  When he prays for guidance, an angel (Cary Grant) visits.  Only, while the angel proceeds to brighten the lives around him, ingratiates himself with the bishop’s wife and daughter, the low-key mischief he visits on the bishop only deepens the man’s frustration.  Eventually, though, the angel sets the bishop straight and reminds him the important things in life are family and the Christian ethic.

END_OF_DOCUMENT_TOKEN_TO_BE_REPLACED

Screenplay by Ladislas Fodor, based upon the stories by The Brothers Grimm

If you think about it, George Pal was well-positioned to be a strong rival for Walt Disney.  He received seven Oscar noms for animated shorts he directed in the 1940s, and was even awarded an Honorary Oscar in 1944 for developing the techniques used in Puppetoons.[1]  In fact, one of his cartoons, Tubby the Tuba, was one I watched about a million times when I was a kid, though I’m not sure how.  It seems like it wasn’t on VHS until the late-80s, when I would have been too old for it, which makes me think it played on early morning TV where I lived as either something in the public domain – a la the Why We Fight series – or just a real cheap program to license.  It’s just as possible I’m just simply delusional. END_OF_DOCUMENT_TOKEN_TO_BE_REPLACED 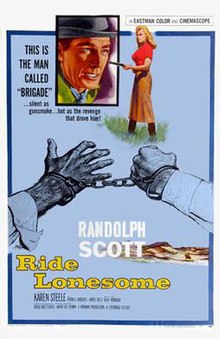 Brigade (Randolph Scott) is a bounty hunter, come to take Billy (James Best) back to Santa Cruz to stand trial for shooting a man in the back.  On the way back they stop at a way station where the absent master has left his wife, Carri (Karen Steele), in charge while he’s off on business.  (Turns out, he was killed by Indians and won’t be returning at all).  Two other men at there, though: the charismatic, but not all-that-threatening outlaws Boone and Wit (Pernell Roberts and James Coburn).  Boone and Wit might have it in mind to rob the stagecoach, but change their mind when they realize bringing Billy to justice might mean amnesty for them for past crimes.  Shortly, Indians attack and Billy’s brother, Frank (Lee Van Cleef) give chase as well.  The tension over Brigade collecting the bounty for Billy, and Boone getting amnesty for Billy, threatens to come to a head, until it turns out Brigade really has no interest in Billy beyond using him as bait: he wants Frank to catch up with them because he’s got a score settle with Frank.[1]  In the end, Brigade gets his revenge, Boone gets his amnesty, and everybody goes away happy.  Except maybe for Carrie, who’s husband is dead, and Billy, who’s probably going to be hung.

Ride Lonesome is a basic, standard fare western, comprising elements of films we’ve all seen before.  Don’t mistake – these elements are assembled well and Boetticher’s direction keeps the film light on its feet, and prevents any drag – at 73 minutes long, it sure would be a trick if it did drag.  Flourishes aside though, it is derivative.

Where it’s earned is the early-going of the film feels like a re-tread of Rio Bravo, which was itself later retreaded much more explicitly by Assault on Precinct 13.  And Alien.  And The Thing.  And…

Rio Bravo is the story of a single location under siege by outlaws, and in Ride Lonesome, when Brigade arrives at the way station with Billy, and Indians threaten to attack, and we knew Frank was probably on his way, I began to suspect we were going to play that siege story out.  That they would hunker down and wait and we’d get the B-movie version of Rio Bravo.  Even when the plot broke and the group of them moved on to a second location, the threat of it all returning to Rio Bravo territory was still there, because our heroes could easily have come under siege at the second location.[2]  But the curious thing is that in neither location are they ever really put under siege.  Sure, there’s some gunfights with the Indians, but they are fast and over quick and the threat dissipates in almost a moment, allowing Brigade and his fellows to keep on the move.  And that’s the key difference – the plot is too often on the move to really fall into being a low-rent Rio Bravo, even if it evokes it. 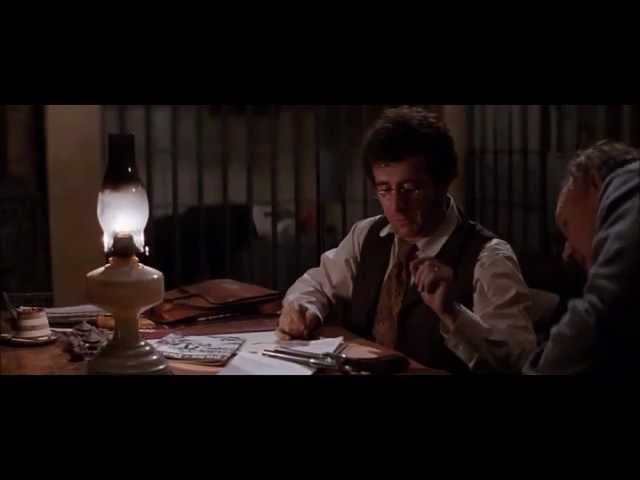 Little Bill given Beauchamp the pistol

Where calling the film derivative is unearned is in Ride Lonesome’s best scene, which is liberally borrowed by Clint Eastwood’s Unforgiven.  In that film, after English Bob has been jailed for bringing guns into a town where you can’t do that, Bob’s biographer, Mr. Beauchamp, is encouraged by the sheriff, Little Bill, to give Bob a gun so they can see how quick either man is on the draw.  Bill is tantalized by the prospect of killing Little Bill, a man who very-recently beat his ass, and good, but ultimately declines to take the gun, fearing it is unloaded and he’d simply be shot in a moment of cruelty.  The twist is, the gun was loaded and he missed his chance.

In Ride Lonesome the scene plays out such that Billy actually gets his hands on a rifle and sticks it in Brigade’s belly, ready to blow him open.  Only, Boone intervenes and says if Billy pulls that trigger, he’s getting shot next no matter what happens.  Which Boone says would be a waste because that rifle Billy is holding actually belongs to Boone, which means there’s no shell in the chamber for firing.  See, Boone says he accidentally shot himself in the leg once with a loaded rifle and so to not make the same mistake twice, he doesn’t chamber a shell in a rifle until he needs it.  Which means Billy would get himself shot for nothing.  Reluctantly, then, Billy puts the gun aside, only to learn there was a shell in the chamber and he missed his chance.

While there are many similarities between this scene in both films, the key difference is in Ride Lonesome it plays out over a two minute stretch of time, out in the dessert on a calm morning.  It’s good, don’t doubt that, but it does not achieve the tension it could.  Whereas in Unforgiven the scene plays out in a sheriff’s office, while it’s storming outside and the tension seems to ratchet up for an eternity.  If nothing else, watching these two scenes side-by-side is a lesson in how two different filmmakers, with different sensibilities, can take similar subjects and make something completely unique with them.

While this series has given me more time with westerns, it’s also got me a little more acquainted with Randolph Scott.  Before, I only knew him in a supporting role in the screwball comedy, My Favorite Wife.  Now, thanks to this series, I know him as the star of modestly-budgeted, efficient action westerns.  Even though I have a very limited sample size of just three films of his to draw from, it’s easy to see a certain sort of pattern with Scott.

Onscreen, Scott excels as a tense, square-jawed, taciturn type.  While he’s eminently watchable, it’s almost more as a curiosity, or in a morbid way, like waiting to see if this guy’s inherent stiffness/awkwardness will finally break down into a mess.  Except it doesn’t and he just comes across like a less-charismatic John Wayne, who makes up for that lack of charisma by being a complete mystery in many ways.  Moreover, where John Wayne is generally electric onscreen, because you know how quick he can be to violence, and what he’s capable of – he’s a very out character, most of the time – Scott is interesting in that, because he’s a mystery, the danger is not knowing what he’s capable of.  In that way he’s almost a blank slate that we build up into something more by mapping our own anxieties on him.  Because Scott and Wayne play so many similar character types, the real difference I see between Scott and Wayne is Wayne always has a streak of good humor buried somewhere in him; Scott seems distinctly humorless.  That said, Scott is above average here in the role of Brigade, and even if not a great actor, he’s direct and watchable.

The supporting cast is uniformly fine, but given the film is 73 minutes long, there isn’t a lot of time for any of them to do much.  Pernell Roberts is the standout, basically the second lead, and though he’s supposed to be an outlaw, he’s too good-humored to really be a menace.  Karen Steele is fine in a thankless role, Van Cleef has little to do, and Best is nothing special.  The one who stuck out from the supporting players in a different way was Coburn, who is charming and almost sweet in the role, but at the same time seems a bit wrong for the role: he’s too savvy of a man, and knowing, to effectively play as naïve as the role needs.

While Ride Lonesome is an efficient and satisfying film, the one complaint is the music.  In a film tinged with so much tragedy – Carrie’s husband is killed offscreen by Indians, who then offer to trade his horse for Carrie, as well as Brigade’s wife having been hung by an outlaw – the scenes adjoining these revelations have such jaunty music in them that the drama of the moment was really undercut.  In a film that is so efficient in everything else, this felt like a glaring miscalculation.

Scott and Best at the hanging tree

While the film is called Ride Lonesome, it seems a real shame it wasn’t called The Hanging Tree.  Given the prominence of a hanging tree in the film, that feels like a real missed opportunity.

[1] Years ago Frank hung Brigade’s wife from a super-special hanging tree in revenge for something or other.  This apparently was no big deal to Frank, who has basically forgotten it happened.  On the other hand, Brigade’s been burning on it ever since.

[2] This threat seems more budgetary than plot-driven.  After all, shooting in a single location has to be cheaper than shooting all over creation.