Ronald Colman was an old-style movie star, of the kind we basically don’t see anymore.  Handsome, debonair, always clean and seemingly well-pressed, but with a bit of a roguish streak to them.  Modern analogues might be George Clooney and Colin Firth.  Moreover, Colman always comes across as authentically continental.  Worldly.

Even so, chances are most people have never heard of him, and if I had to guess why it’s because while he had a solid career, it wasn’t like that of a Jimmy Stewart or a Cary Grant.  Which is to say, he wasn’t an actor associated very strongly with classic movies and classic directors – Capra and Hitchcock for Stewart, Hitchcock and Hawks for Grant.  And even if somebody has heard of Colman, there’s a good chance that’s because Colman is name-checked in Robert Redford’s glorious, A River Run’s Through It.  In that movie, Jessie’s brother, Neil, has returned from California and is bragging about all his famous friends, including Ronald Colman.  “Ronald Colman!” Jessie says, nearly swoons, and in that moment Neil is somehow gratified by being in the distant, reflected glow of Ronald Colman, rather than being disappointed he’s not Colman himself.

That all said, Colman still had a strong career.  He got his start in silent film on both sides of the Atlantic, and because he had such a good voice, transitioned to talking pictures.  He did a movie with John Ford, did one with George Stevens, one with Joseph L. Mankewiecz, and did one with Frank Capra – Lost Horizon.    He even won an Oscar for this entry, A Double Life.  What he didn’t have is a role is a true classic – there’s no Gone With The Wind on his resume – nor a career stretching into the 1960s, when the film brats might have taken a shine to the debonair old man.  Instead, he had a very solid career, then dropped dead in 1958 at age 67.  One suspects if he’d had one or the other of those, he might be more than a distant memory today.  As it is, he’s just another handsome man, with a good speaking voice, who floated away with the breeze.

Anthony John (Ronald Colman) is a successful Broadway actor with a penchant for going a little too-method in his work, to the extent that often his life begins to imitate his art.  Still, he takes Othello for his next role and, as expected, the longer he plays the murderous, jealous moor, the further afield his mind drifts from reality.  Eventually, just as Othello kills Desdemona out of misplaced jealously, the actor kills a sexy waitress (Shelly Winters), also out of misplaced jealousy.

In the annals of great roles, Anthony John is one that’s unheralded, and unfairly so.  After all, there’s so much it allows an actor to do.  First, playing Anthony John means not only playing that character, but playing that character playing comedy, and that actor playing Othello, and that actor playing around with accents as voices.  It offers intensity, insanity, and Shakespeare – what’s not to love?  Better, because the movie is about a performer performing, it very much rewards actors that like to play – and Ronald Colman came to play.

Of course, it helps that the part of Anthony John seems catered to Colman’s sensibility.   Where a Cary Grant or a William Powell might come across as too lightweight in the part, or George Sanders seeming all-too-malevolent from the start, Colman graces us with the perfect balance of charm and wit and menace this sort of role needs.  If he were only charming, nobody would buy him as a murderer, but if he was only a murderer, nobody would by his charm.  Colman seems to get this distinction and, no shock, threads that needle perfectly.  Yes, this ability might be an instance of an actor with limited range working the hell out of that range, but there’s nothing wrong with seeing that.  Just because Broderick Crawford was lousy elsewhere doesn’t mean he wasn’t great in All The President’s Men.  Same for Ray Milland – he might have been mostly terrible in most of the movies you’ve seen him in, but he’s about perfect in The Lost Weekend.

But while Colman is what you should queue up for here, and Cukor’s direction is appropriately moody and on point, the film is not without its flaws.  For most of the runtime it plays as a character study of a man slowly losing his mooring with reality, until it finally comes fully apart.  Too bad that when it does come apart the film instantly shifts from being a character piece to being a murder mystery, with Colman mostly offscreen.  And when he is offscreen, the film drags.  Badly.  Some of this is because we already know Colman’s Anthony John committed the murder, so the mystery of it is tedious.  More, though, is that Colman and his energy are just gone.  Without it, the film plays terribly.

Haven’t I See This Sort of Thing Elsewhere?

In many ways you can see echoes of Ronald Colman’s Oscar victory in Gwyneth Paltrow’s Oscar victory for Shakespeare in Love.  After all, in both films they each play an actor playing a Shakespeare play, effectively giving them two separate characters to play in one film.  But Paltrow has the showier role, playing a part in the movie, then playing both Romeo and Juliet in that same film, while Colman only has Othello.  Either way, both films are truly actor’s pieces, and it’s no shock they each won an Oscar for their work. 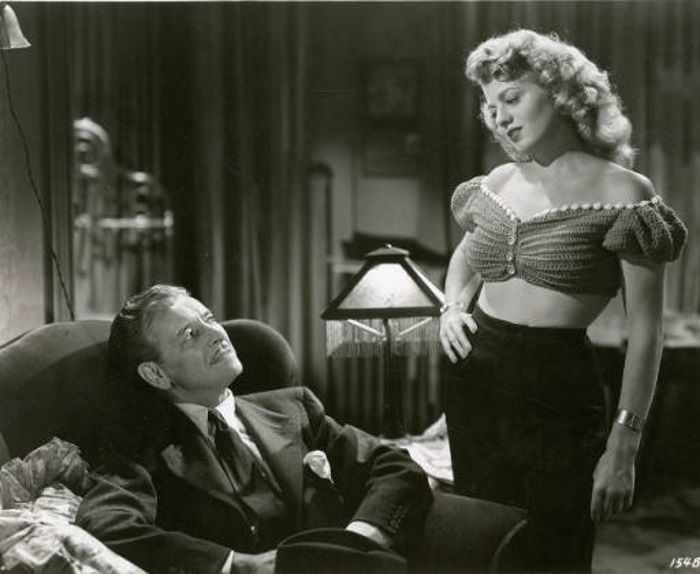 A Double Life was not Shelley Winters’ first film, but if was the first where she really broke out.  Here she plays the doomed waitress strangled by Ronald Colman.  What’s interesting about her turn here is that, even though she was a double-Oscar winner, and certainly once had to be young, this film is another chance to be reminded that Winters was also once incredibly sexy.  If anybody has a strong memory of Winters it’s probably either from playing the middle-aged, overweight swimmer in The Poseidon Adventure, or from doing 10 episodes of Roseanne in the 90s.

What nobody has strong memories of her as is a beautiful young woman.  And here in A Double Life she’s just that – a beautiful young woman who you can believe as a woman alluring to Ronald Colman.  And Colman clearly lusts after her.  And even though this film was made at the height of the Production Code era, when sexuality was strongly curtailed, there is no doubts she and Colman fuck.  Sure, you never see the two of them go to bed, but after he kisses her at one point, and the film fades out, there is no mistaking what the two of them are doing in that fade out.

Perhaps part of the reason we associate Winters with older, heavier, brassier women is because that’s basically what Hollywood was trying to make her for years.  Sure, she’d get to play a prostitute in Winchester ’73, so at least there was tacit acceptance of her as a sexual being, she also was cast as the needy, nagging other woman in A Place In The Sun.  And while she was just 31 when she made A Place in the Sun, and far-too-young for what Hollywood wanted to do with her, in my mind that role set the mold for how Hollywood perceived her – a needy nag.

It’s somewhat hard to believe that Ruth Gordon, who for many years I only ever knew as an actress, owing to her one role in Clint Eastwood’s Every Which Way But Loose, which I loved as a kid – was also a much-lauded Hollywood screenwriter, working with her husband, Garson Kanin.[1]  Together the two of them were nominated for three Academy Awards – including one for this film – and five Writer’s Guild of America Awards.  And while I still regard her as an actress first – she’s since become known to me as Maude in Harold and Maude, and won the Best Supporting Actress Oscar 1968 as the witchy Mrs. Castavet in Rosemary’s Baby – it is nice to know she had a truly well-rounded career.[2] 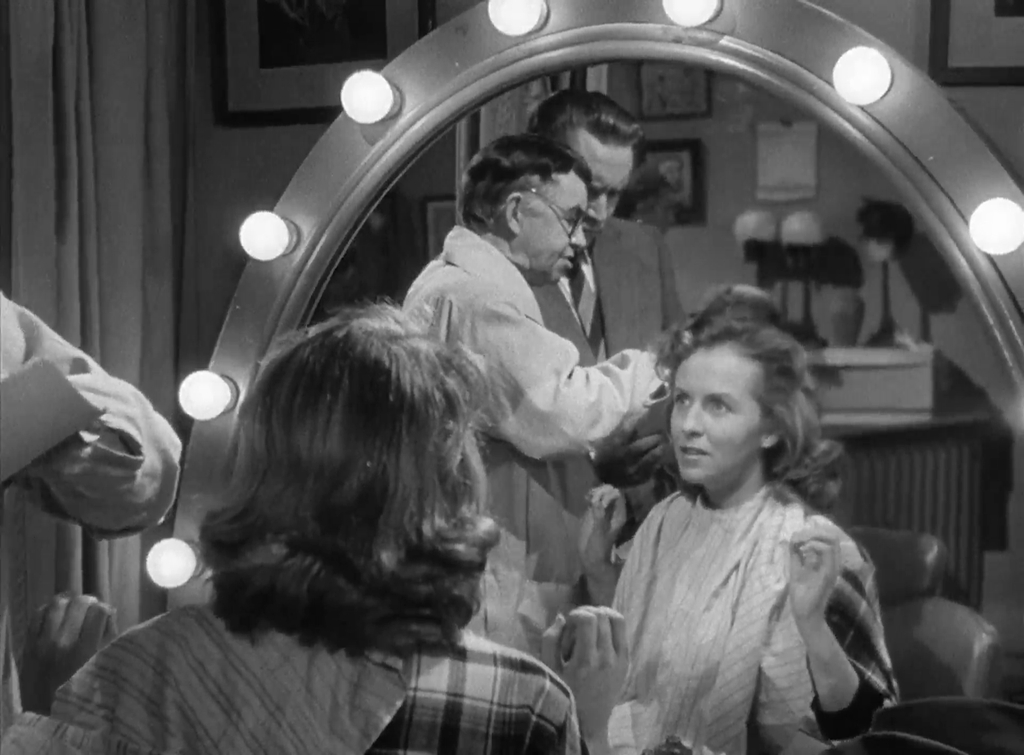 Previous to this series I did The Best Picture Project and The Also-Rans Project – my regular readers already know this.  In The Best Picture Project, I covered Marty (1955), which co-starred Betsy Blair as Marty’s love interest, the homely Clara.  At that point in her career Blair was best known as being Mrs. Gene Kelly, but received an Oscar nod for her work on Marty.  Later, in The Also-Rans Project, I covered The Snake Pit, a film starring Olivia de Havilland in one of those turns actresses sometimes make to win Oscars, which is to downplay their beauty and go a little crazy.   Only de Havilland did not win one for that role.  Anyway, playing the small part of a mute murderer locked in the proverbial snake pit is Betsy Blair.

After she appeared in my previous two series of reviews, it’s fitting she’d pop up in this one.  And here Blair is, in one scene late on in the film, playing an actress in a wig shop so hard up for work she’ll gladly allow herself to be made over to resemble Shelley Winters, and act as bait to catch a murderer, just so she can have a payday.

[1] In some ways, learning she had a strong career as a writer before she turned to acting is akin to learning that Oscar winner John Houseman – Best Supporting Actor 1973 – was Orson Welles’ original producer and partner.

[2] She was also apparently Tony nominated for playing the role of Dolly Levi in The Matchmaker, a role later played by Barbara Streisand in the musical version of that story, Hello Dolly!