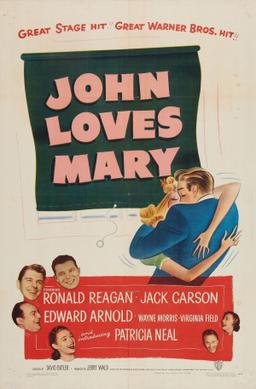 Screenplay by Phoebe and Henry Ephron, from the play by Norman Krasna

I’ve never seen a Ronald Reagan movie.  Yes, he was President and ‘acted’ his way through that, but that’s more a reality show than a movie these days, if we’re honest.  Anyway, what’s amazing about seeing no Reagan movies is I see a lot of movies.  Like, way more than the average person.[1]  But honestly, I’m  probably not alone in not seeing any Reagan films because I’m pretty sure even the idiots who think the man was a great president also haven’t bothered perusing his filmography.  The reason?  Because the general consensus is his movies are not worth seeing.  After all, of his entire filmography just three of those films managed Best Picture nominations, and the only one of those three even rated a mention in The New York Times Guide to the 1000 Best Movies Ever Made was Dark Victory.  Even then, that mention probably has more to do with it being a Bette Davis/Humphrey Bogart vehicle than it does for featuring an at-best-fifth-billed Ronald Reagan.

If anybody has seen a Reagan film the most likely candidate is Knute Rockne, All American.  Given the fact that where I live in southwest Michigan there is a strong Notre Dame contingent, and also a very politically conservative contingent, this movie hits the center of that Venn diagram perfectly.  But then again, as most right thinking people disdain Notre Dame football, maybe that’s a reason to stay away.  But even then, that was not a Ronald Reagan movie — it was a Pat O’Brien movie.

In the end, the reason I’ve not seen any Ronald Reagan films is he seems like one of those folks that was a dime a dozen in the early-to-middle Hollywood years, which is he was a handsome man who couldn’t act, and also couldn’t generate much heat.  In other words, utterly forgettable.  Which is why it seems appropriate that my first interaction with him as an actor would be in an indifferent film in which he gives the very definition of a heat-less, forgettable performance.

John Lawrence[2] (Ronald Reagan) returns home from four years of serving in the European theater of war and in reunited with his girl, Mary (Patricia Neal).  After so many years apart Mary is itching to get married, and because her father’s a senator (Edward Arnold), she can whip up a wedding in three days.  Except there’s a catch: John’s buddy from the war, Fred (Jack Carson) was sweet on a British gal, Lilly (Virginia Field).  When Fred returned home, Lilly got left behind for various reasons.  Well, John wants to help his pal out and the easiest way to get Lilly to America is to marry her.  So the plan is he marries Lilly to bring her to America, where he’ll get a quickie divorce and pass her back to Fred.  Naturally, he doesn’t want to tell any of this to Mary, so complications ensue.  In the end it all works out perfectly and John and Mary are able to marry.

Here is the essential thing to know about John Loves Mary – it’s a screwball comedy.  Or is meant to be.  I say ‘meant to be’ because unfortunately this is one screwball comedy where the director doesn’t really seem to get how to work the material, featuring two stars who don’t seem to know what the hell they’re supposed to do with it either.  Which is too bad, because everybody else in the film is quite clear on how this all works and it trying their damndest to get it across.

As to David Butler’s direction, it’s bland, lazy, and does nothing to help this film break free of its stage origins.  Moreover, Butler doesn’t understand that the best screwball comedies set a strong pace of play, picking up speed as it moves along, because he just lets this thing spin its wheels.  To be fair to his direction, the story is just not all that funny either,[3] but even so, he doesn’t know how to wring what few laughs there are in the scenario out of it.

As to your stars, Patricia Neal is wrong for the part of Mary.  Yes, in later films she’d prove capable of playing hard-bitten and cynical.  World weary, perhaps.  But this movie asks her to play a romantic lead, almost an ingenue, and Neal is just too knowing to pull it off.  Worse, when the movie asks her to be screwball-comedy-broad in her emotions, she goes for grating, soap opera emotions, and is completely out of step with what the film needs.  To be fair, it’s the part itself that does her the greatest disservice, because the greatest screwball comedies feature a man and woman as leads who are each in on some sort of ruse, and equals, and you get the funny interplay between them of who’s ruse is who’s, and who knows more.  Here, though, Mary is played as ignorant of most things going on around her, saddling an actress wrong for the movie with a part that’s also wrong for the movie.

Ronald Reagan is, at best, an indifferent actor and generates no heat.  If he’s supposed to be a romantic lead, one should be able to imagine him romancing them, but with Reagan, he just can’t sell it.  Moreover, he has no sense of the timing.  His most constant look is one of constipation and mostly he stumbles around without adding much value to the proceedings.  In fairness, he’s easily a decade too old for the part – John seems to be written as around 28 or 30 years old, but at the time the movie was made, Reagan was 38 or 39 – and that he reads too old for it undercuts much of the antic.

The downside of the lousy Reagan and Neal performances is that the people around them do understand the material and are doing their best to drag this corpse along.  Jack Carson as Fred has the right sort of broad, hang-doggedness required for the hero’s buddy.  Edward Arnold sinks his teeth into the role of the senator with relish, capable of playing both ends of the friend/foe spectrum the role requires.  Virginia Field is maybe a bit too broad in her portrayal, but at least she’s on the right track.  And Wayne Morris really nails the part of the stuffed-shirt phony he seems well-built to play.

Given the supporting cast is so game for it, you can imagine a scenario where Reagan and Neal are not in the film at all and Carson and Morris and Field merely step one role up in billing.  If only they’d done that, this film would be greatly improved.

Earlier I speculated that the character of John seemed to be intended as in his late-20s at best, whereas Mary is probably in her mid-20s at the latest.[4]  Meaning, that when John left for the war four years before the movie starts, John would have been 24, and Mary 19.  Which also means they probably were hooking up a year before that, when he was 23 and she was 18.  It’s not the worst age difference in the world between 18 and 23, even though it’s still a bit gross to think he was trying to hook up with her when she was just barely an adult.

Where this all becomes really gross, though, is when you impose the age of the actors on the characters they played.  Patricia Neal was the same age as her character – or seemed to be, provided her character was 23 or 24 – whereas Ronald Reagan was 39.  Which means if John is 39 when the film opens, he left for the war four years ago, he was a 35-year-old man romancing a 19 year old woman.  It’s not exactly the best look in hindsight.

[1] A few years ago I started tracking the films I watch and that’s how I know over the last three calendar years I’ve seen roughly 1050.

[3] There was one time, and one time only, when I laughed out loud – it was the first time Edward Arnold tells a joke and laughs at it himself.

[4] Patricia Neal was around 23 at the time of the film, so seems age-appropriate for the part of Mary.