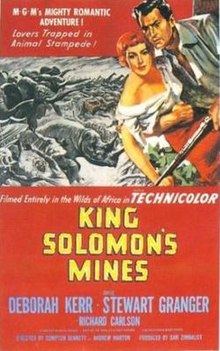 Screenplay by Helen Deutsch, from the novel by H. Rider Haggard

My overriding theory when it comes to film criticism is to try to find things I like in every film I see.  To be a champion for them.  If you follow me on Letterboxd.com, and you probably don’t, then you’d know I put this theory into action by giving most everything 4/5 stars.  Basically, it’s my equivalent of the “Gentleman’s C” and forms the baseline I work from.  Others may put their baseline at 2.5/5 or 3/5, and I suppose as long as everybody is grading fairly along their own chosen scale, then the movies are treated honestly, even if one man’s 3/5 is another man’s 4/5.

Why do I go with 4/5?  Because most movies are adequately-good, in one way or another, and to give anything less of a rating implies problems that just aren’t there.  The fact is, most films don’t have real problems or critical flaws.  Sure, most could be better, but at the same time, they could be a whole lot worse.

That all said, now and again I do run up against a real dog, and say so.  And while writing those reviews can be fun, they don’t really bring me joy.  And I want joy from the movies.

But, even if one critics 3/5 is treated by them the same as my 4/5, I still have some mental block about dropping below that 4/5 line as a baseline.  This is not to say all 4/5 films are built the same, or even play the same, or even succeed the same, because they don’t.  It’s just that when a movie mostly succeeds at what it wants to do, and is at least mildly interesting, or has good forward momentum, or has a stellar performance, I have no problem giving it 4/5.

In service of this I do my best to look at the bright sides of the movies, and find the positives in them.  After all, if you spend your life trying to knock things down, or spend your movie-going time trying to pick the movie apart, you’re never going to have much joy in watching a movie.  And I like watching movies.

And one of the joys in watching King Solomon’s Mines was knowing that I’d found a perfect example of a movie that would otherwise rate a 3/5, but which I upgraded to 4/5 for wholly arbitrary, but completely justifiable, reasons. 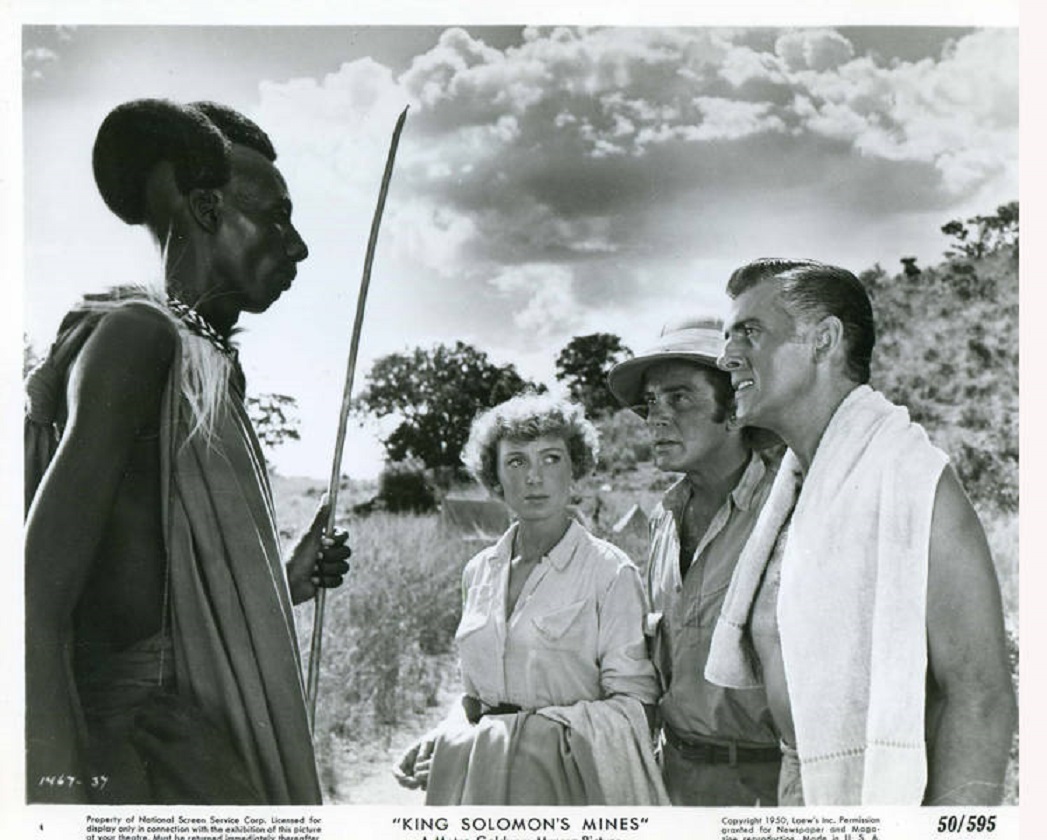 The time is 1897, the place is Africa, and Allan Quatermaine (Stewart Granger) is a well-known hunting guide.  After years on that job, though, Quatermaine’s grown weary of all the killing for fun.  In this situations arrives Elizabeth Curtis (Deborah Kerr) and her brother, John Goode (Richard Carlson), who’ve come from England in search of Curtis’ husband, who went missing two years before while searching for a rumored diamond mine in the unexplored African interior.  Reluctantly, Quatermaine agrees to lead the party on their quest.  After months of searching, with their party having dwindled to just the three of them, they discover the fate of Curtis’ husband, and narrowly escape the interior with their lives.

If I was a normal critic – that being the kind inclined to hate on movies – I’m sure King Solomon’s Mines would be a middling film.  Yes, the critic would mention the visuals – though the film is shot in the Academy ratio, the African landscapes are gorgeous – but on the whole they would likely point out the film is dull and pretty unexciting for an adventure film, that the star is a bit wooden, and there are racial issues everywhere that make the film deeply problematic.  And despite all those things being true, I still find myself unable to call the movie middling.  That’s because, in spite of itself, and trying hard at times to push me away, King Solomon’s Mines eventually won me over by possessing some ineffable quality I can’t quite get a grasp on.

It is true the film is a little on the slow side, a little on the dull side, and very much on the not-an-adventure side.  For a movie that promises an Indiana-Jones-in-the-jungle story, there is little in the way of incident or narrative propulsion in it.  And, at times, the film seems more like it wants to be a travelogue of beautiful African views and animals – it was shot on location – than a fictional narrative.  Yet, I didn’t give up or blow raspberries at it.  I was interested enough in the physical chemistry of the leads, the promise of violence, and the visuals, that I never turned it off, even as I might easily have let my mind wander under other circumstances.

And the movie is pretty thankless in how it treats Deborah Kerr.  From the get-go, her character is portrayed as basically helpless, and the men resent her as somebody they basically have to drag along through the jungle because they don’t think she’s even remotely capable of it on her own, for no other reason than she’s a woman.  It doesn’t give her any heavy-lifting to do as far as acting, and sometimes just seems more to treat her as a laugh-line, and a bit of colorful hair, rather than a person.  Even so, Kerr is so ingratiating, and hardly seems above it, that you can’t get too angry at what the movie wants to do with her.  Her good nature saves it.

Of course, the film is much more generous to Stewart Granger as Quatermaine, even though Granger is definitely a medium talent, at best.  His acting is sort of like a proto-Harrison Ford, just with a British accent, and you could see him stepping into the role of Indiana Jones without much trouble.  For his part, Ford has never been considered a good actor – he’s got charisma and presence, but not much acting range – but it’s possible Granger has even less.  Still, his gruffness, and deep speaking voice, do enough to put him across as a credible person and you can see him having a solid career in a certain kind of Quatermaine-adjacent role.

While the movie is very retrograde racially by today’s standard, it actually plays like a giant leap forward for race portrayals at its time.  Remember, King Solomon’s Mines came out at a time when white actors were still putting on makeup to play non-white parts, and to see genuine African’s playing African’s, for all their variety of hair styles, and skin hues, was quite surprising.  Moreover, while the film does often treat various black peoples as being interchangeable to some degree, it at least presents the idea that black people are not a monolith – there are many distinct tribes and languages, and they are not presented as being uniformly savage or warlike.  There is a certain fairness in the portrayal of them, even if it’s incredibly disappointing that all the black faces were relegated to being just a step above extras, employed to walk through the background and make the movie ‘exotic’.  This is especially true when the story of one of the group, Umbopa (Siriaque), turns out to be of a king traveling in disguise to go back home and claim his crown.  At a glance, his story is far more interesting than any of the white characters and it’s a shame he was relegated to the side.

Yet, despite all these things wrong with it, the films does win you over.  And by the end, try as I might to resist, it was genuinely easy to give into it.

In The Also-Rans Project I did my 1950 also-ran on Born Yesterday, which I found a fine film, anchored by a delightful performance by Judy Holliday.  Turns out this entry could have worked in that project as well, as one of the three Oscar noms King Solomon’s Mines received was for Best Picture.