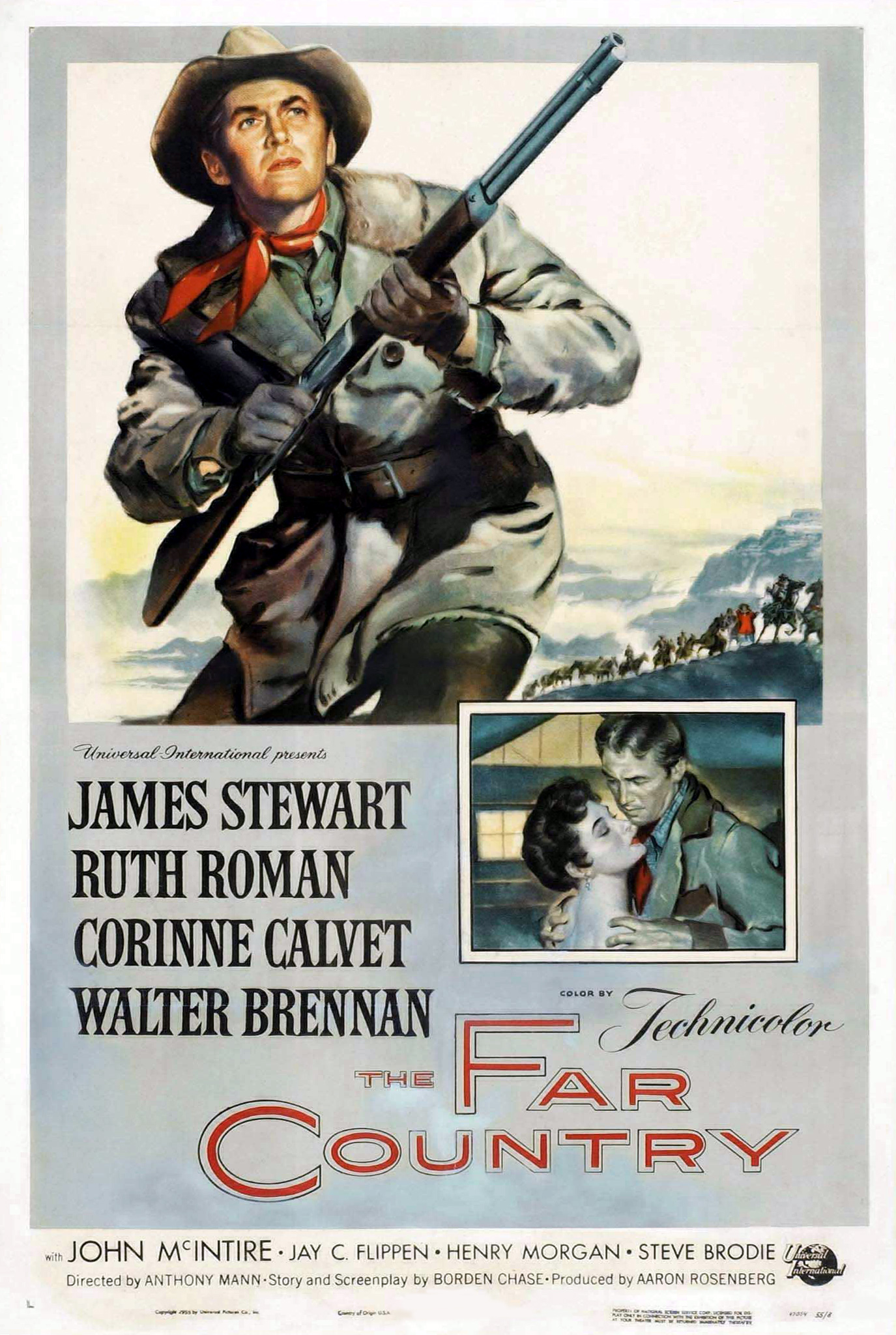 One of the best documentaries of the last few years was Dawson City: Frozen in Time.  That movie told the story of about 125 years in the life of Dawson City, a remote town in the Canadian north.  Dawson City’s claim to fame was that the small backwoods outpost experienced a population explosion in the Yukon Gold Rush of 1896-1899, only to see the same population fall dramatically in the immediate aftermath of that gold rush.  What’s important is that, like any other town, Dawson City liked its movies.

But, because the city was so far off-the-beaten-path, it was literally the last stop film prints would make in their life.  The folks of Dawson City would watch them, then they’d be disposed of, with many ending up buried beneath a Dawson City municipal swimming pool.  Only, because the city is so far up in the Yukon, and because being buried under the pool protected the prints from the elements, the prints did not degrade nearly as much as they could.

Decades later, when the film reels were excavated, a rare cache of 533 reels of silent film was revealed, with many still in remarkably-good shape.  In it’s way, those reels acted as a perfect time capsule of both Dawson City in the early 1900’s, but also the early years of silent film.

Jeff Webster (Jimmy Stewart) has driven a heard of cattle from Wyoming to Seattle, intending to ship them north to Alaska, where he’ll make enough money on the sale to buy himself that homestead in Utah he’s always dreamed of.  Except, when he arrives in Alaska a crooked judge (John McIntire) confiscates the cattle on the back of trumped-up charges, leaving Jeff high and dry and broke.[1]  But Jeff isn’t about to be made broke without a fight, so steals his cattle back from the judge, intent on driving them into the Yukon Territory of Canada, where he can sell them in Dawson City for exorbitant prices.  But the Judge isn’t down with that turn of event eithers, turning up in Dawson City to get his piece of the cattle sale.  Also, he’s not above strong-arming guys out of their gold claims, including Jeff, who doesn’t take to being leaned on.  In the end, Jeff shoots the Judge in a gunfight, inspiring the rest of Dawson to stand up for themselves and send the Judge’s gang away. 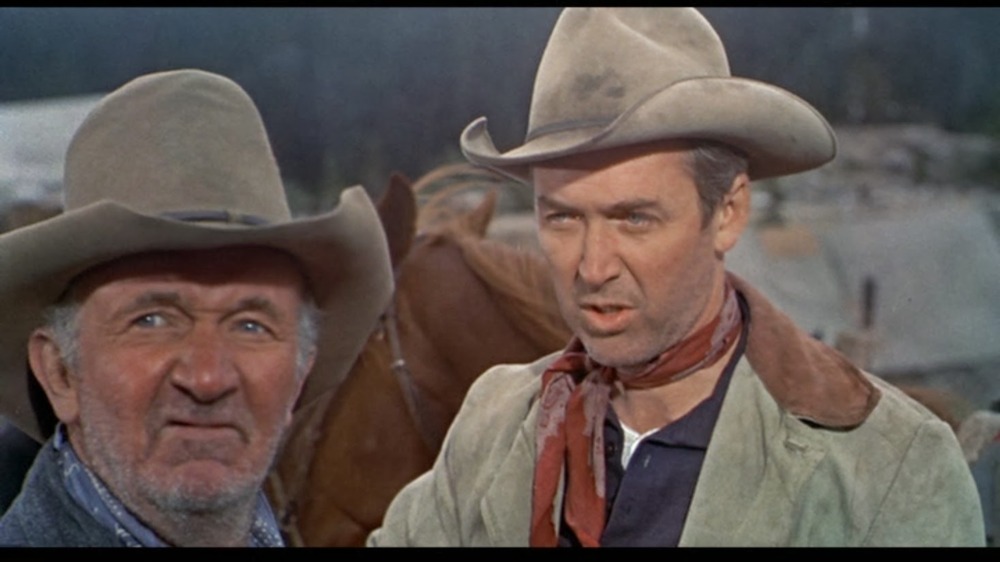 Jimmy Stewart and Anthony Mann made eight movies together in the 1950s, more than Stewart made with Hitchcock, even if it’s the one with Hitchcock that’s most commonly remembered.  Part of this is surely owing to Stewart and Mann mostly making sturdy little westerns and war movies.  Sure, one of them is a stone-cold classic – Winchester 73 – but even I’d have to admit it’s not on the same level as Rear Window or Vertigo.  Basically, the two men made movies that probably would have been B-movies if a star like Jimmy Stewart weren’t starring in them.

That’s not to say any of their films were bad, and couldn’t be damn good, because they often were.  It’s just they were not necessarily meant to be art.  They were meant to make money and, by all accounts, they did.  And making money is key, because that’s why Stewart was in these films in the first place.  After all, at a time when many actors were still on contract to the studios, and paid a wage, or worked independently and were paid by the film, Stewart became a profit participant in his movies, a novel practice in the 1950s.  But in taking his cut from the back end, Stewart managed to make $600,000 on Winchester 73, at a time when his going rate was apparently $200,000.  It’s also how he managed to make $300,000 off The Far Country.

All that said, The Far Country is not great.  It’s direct, pretty simple of story, and mostly devoid of subtext.  It doesn’t stretch for greater meaning, only wants to be the story of one man looking to make one last big pay day so he can retire.  Essentially, the story of The Far Country is like a crime movie in which a guy has to pull one last score before he can retire, only to see everything go wrong.

Stewart is fine as Jeff Webster.  Like his other westerns from the time, his character has a harder edge, which is a nice change from the young romantic we tended to see him play in Frank Capra films, and also the men with psychological issues in Hitchcock films.  In a lot of ways Stewart is one of the best actors we’ve ever had, capable of conveying many different emotions, and playing in many different sandboxes.  Here he’s particularly good about the use of his eyes and face to convey he’s not a man who’s going to be trifled with any longer, even if he’d rather figure out a way to slip away without a fight.  But, because he’s so identifiably Jimmy Stewart, he obviously struggles to truly disappear into any role.  Still, Stewart is good, and the film is fine around him.

Walter Brennan as Jeff’s partner, Ben, is good at playing an addle-brained old man.  He’s genial, has the right voice, and brings color.  He also brings believable pathos to the story.  What’s interesting about Brennan is that because he came up through the extras in the early days of Hollywood, many think of Brennan’s three Oscars, all awarded at a time when extras had a vote for that award, as being the product of a good reputation among the extras and that they were simply honoring one of their own.  But this idea short-changes his acting abilities.  In his scenes here he plays honestly and truthfully, and doesn’t seem to be coasting off his good nature.  In fact, if I’m honest, I’d say he’s easily better here than he was in Sergeant York, a film where he was nominated for an Oscar at a time when extras didn’t have the vote.

The best of the rest of the cast is John McIntire as Judge Gannon.  He also made a couple movies in the 1950s with Anthony Mann, and is best known to me as the gambler and gun-dealer in Winchester 73 who winds up with the titular weapon, then winds up porcupined with arrows at the hands of Young Bull and his tribe.  There as here he has a sense of good nature about him, but also malevolence and a lingering undercurrent of violence, all of which are conveyed without a raised voice or even a cross word.  He makes plain the truth that the more a man smiles at you and tries to be your friend, the more sinister he seems.

All that praise aside, the film does have a bit of a grossness to it, particularly in the way the youngest character of the movie, Renee (Corinne Calvet) a blonde with a French accent, has a bit of lust for tall, brown haired men, i.e. Jimmy Stewart.  She longs to sing to him – she apparently has an amazing voice – and even though he basically rustles his own cattle on his way out of town, surely a hangable offense, Renee is so horny for him she hitches along for the ride.  She’s young, and pretty, which makes it a problem that her character is set up to be the young, virginal woman who wants the older man to despoil her.[2]  Except, the movie has Jeff explicitly reject her and treat her as a child, preferring for himself the more age-appropriate Ronda Castle (Ruth Roman).  Sure, Roman was 32 at the time the movie came out, so there’s that, but she does seem to be playing slightly older in the film, making her at least somewhat closer to a contemporary of the 46-year-old Stewart.  Even if Corinne Calvet was actually 29 when she made The Far Country and was as age in/appropriate for Stewart as Roman was.   So, one step forward, one step back.

Like many of Stewart’s westerns in the 1950s, The Far Country was filmed on location and it shows.  Where many films of the 1940s and 1950s would make this kind of film on a backlot, on recognizable sets, this film actually looked like it filmed near where it took place.  In this instance, in western Alberta, Canada.

[1] There’s also a murder charge somewhere in there that is basically swatted away without a second thought.

[2] At least, that’s her unwritten want, even if it’s pretty clear that’s exactly what she wants.