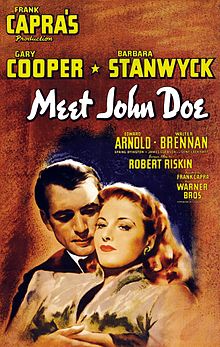 Screenplay by Robert Riskin, from the story by Richard Connell

Frank Capra was inarguably the most successful director in the early years of the Oscars, at least as far as winning awards were concerned.  He won Best Director three times,[1] the first man or woman to win three awards total, was nominated for Best Director three other times,[2] and saw two of his films win Best Picture.  On top of this he led the propaganda unit of the U.S. Military during World War II, making films in the Why We Fight series, winning an Oscar for Best Feature Documentary for his troubles[3], bringing his career haul to four.  But more important than critical acclaim, and the appreciation of his peers, his films tended to be financially successful, which is the only metric Hollywood ever put any stock in.

And yet, after he returned from the extended break many in Hollywood took during World War II, when they all joined the army in some way, Capra made just five more feature films before hanging it up for good after 1961’s A Pocketful of Miracles.[4]  Part of the reason he stepped away from feature films in the 1950s was certainly the specter of the backlist and, while Capra himself was never a target, his past associations with many Blacklisted individuals surely roused suspicion and promised to make life uncomfortable.  More likely, though, was that in the postwar era Capra’s optimism was now out of step with audience tastes.  So, rather than force an antiquated style on the public, he backed away from them altogether.

After a venture capitalist buys her newspaper, and promptly lays off a vast majority of the staff, ace columnist Ann Mitchell (Barbara Stanwyck) responds by filing in her last column the letter of a man she calls John Doe.  The letter has a populist message about valuing the little guy, which strikes a nerve with the public during dark economic times.  When the hint of fraud is bandied about and rivals claim the letter is a fake, Mitchell’s newspaper determines to produce this John Doe, except there can be Doe, because Mitchell faked the letter.  But, the newspaper isn’t about to pass up an opportunity to increase circulation through a good story and so casts a rando into the role of John Doe (Gary Cooper), promoting the hell out of himi.  As the John Doe movement picks up steam a host of money and political interests try to latch onto it, for their own ends, even if it means destroying Doe himself.  In the end, the message of the little guy wins out as they unite against the crooked politicians and millionaires trying to exploit them.

Is it any good?

Is it any good?  Well, for a while, I thought yes, Meet John Doe was good.  The dialog was fast-paced, the story had contemporary connotations – particularly the way the venture-capitalist buys a thing, only to kill it – and the film crackled with a hard-bitten energy.  Moreover, the cast had real chemistry together and, even if films of the 1940s have an intense artifice not seen today, it did not come across as antiquated.  Particularly, in the scenes of the newspaper men trying to find a John Doe to take credit for the fake letter they’ve written, the film just pops as it goes from one down-and-out guy to another, desperately trying to figure out where his next meal’s coming from.

Only, it isn’t too long before the film changes gears and strives for importance, by leaning into the schmaltz and blind-jingoism Capra is known for.  It’s then that the crackling dialog gives way to montages of the growing of a political movement and speeches, embracing the dark side of the equation of Showing v. Saying.  In short, once the film decides it wants to say something big about society writ large, rather than try to find something universal in this small story, it becomes beholden to it’s worst impulses.  In the end, it bogs down with speeches and self-importance and bored me to tears.

One really doesn’t have to squint too hard at Meet John Doe to see how well it fits into the Frank Capra oeuvre.  It has his usual love of the little guy, his appreciation for small towns, his attempts at lifting up the downtrodden and deifying them.  The problem is that, for the most part, this film is just too simplistic and altruistic to be in touch with reality.  After all, over the last 75 years we’ve seen many different populist political causes come and go and, unlike this one, not one of those were united by positivity – indeed, positivity seems antithetical to the populist political cause.  Rather, populism is almost always driven by anger at, and hatred of, the other.  That’s how Donald Trump was elected president, riding his populist, racist message all the way to the White House.  Compared to reality, Meet John Doe comes across as willfully naïve.

A film that did a much better job of capturing the populist message, and the rot underlying it, was Elia Kazan’s A Face In The Crowd.[5]  In a way, Meet John Doe feels like a naïve version of that film.  In both, the protagonist is basically a yokel who comes out of nowhere to reach the cusp of true political power in a short period of time, ultimately undone by the reality of his own history.  But where Meet John Doe is so altruistic as to be ridiculous, A Face In The Crowd leans into reality and shows us exactly what populists tend to be: opportunists who will say anything and everything without regard for anything else, as long as they achieve their overarching goal of accumulating power to themselves.  For them, there is no ideology, only lust for power.

Of the cast, Stanwyck is fine, but a bit undistinguished.  Yes, it was nice to see her play a little bit more vulnerable than usual, but vulnerability was not her strong suit.  She was best when playing some variation of the femme fatale and while she might have wanted to be in this film so as to work with Capra, it’s not her best.  On the other hand, Cooper is probably about the best I’ve ever seen him here.  Too often he plays almost saint-like characters, simple men who’s one defining characteristic is being stiff and square-jawed.  While Meet John Doe lets him play around with that, it does so to good effect.  His best scene are when, as a homeless man, he’s not too proud to say he wants a job, but is far too proud to want a handout.  No matter how hungry he is.  Though an actor of limited abilities, Cooper is perfectly suited to what this film wants of him.

In The Best Picture Project I noticed that Frank Capra’s earlier film, You Can’t Take It With You, played like a dry run for Capra’s masterpiece, It’s A Wonderful Life, what with the story aping many of the same elements of each other, and with the shared cast, particularly Jimmy Stewart and Lionel Barrymore.

This film, then, also feels like a bit of a prequel for It’s A Wonderful Life, sharing many of the same story elements – particularly the heroism of the common man – and a handful of cast members.  Specifically, we see here:

[4] He also made a handful of educational documentaries for the Bell Labs in the 1950s.