Screenplay by Samson Raphaelson, based upon the play Parfumerie by Miklos Laszlo

In The Also-Rans Project, a Lubitsch film, The Love Parade, made the cut by virtue of being a Best Picture loser.  In that one, Maurice Chevalier played a caddish soldier, who eventually marries the queen of a European country, becoming her consort.  But, while there were elements of that film to be enjoyed, overall it was not special, and did not sell me on what everybody calls, “The Lubitsch Touch.”  Nor did my encounter with another Lubitsch film, To Be, or Not to Be, leave me any better.  In fact, since I didn’t make it more than a half-hour into that film, you could argue it probably left me worse.[1]  After that one-two punch I pretty much decided Lubitsch was not for me – he might have a “touch”, but it didn’t touch me.

But, because I’ve been on a little bit of a Jimmy Stewart run lately, particularly his westerns from the 1950s – The Naked Spur and Winchester ’73 among them – when The Shop Around the Corner hit TCM, Lubitsch got himself a second chance to convince.  Sure, the opportunity came by default, but he got one anyway.  Besides, a win by default is still a win.

Mr. Kralik (James Stewart) is the senior clerk at Matuschek and Co., a retailer of leather goods.[2]  He is a favorite of the owner, Mr. Matuschek and respected by all the other clerks.  One afternoon, Miss Novak (Margaret Sullavan) comes in, seeking a job.  Despite having no openings, as Mr. Kralik informed her, Mr. Matuschek (Frank Morgan), takes a shine to the cut of her jib and so hires her.  Perhaps because he didn’t want to hire her in the first place, Kralik and Novak don’t get along – they have some rather crackling verbal sparring matches.  Only, unbeknownst to them both, the anonymous pen-pals they’ve been corresponding with for several weeks, are each other.  Of course, once that secret is revealed they realize they very much like one another after all. 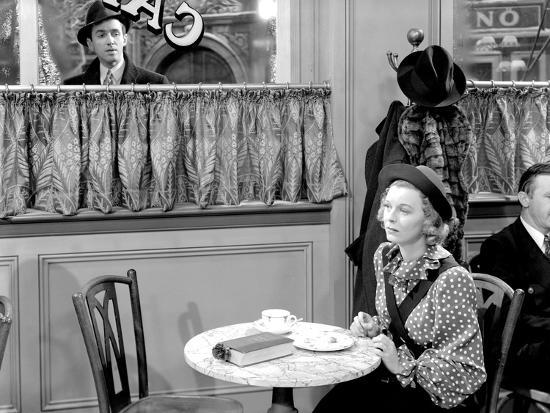 At heart The Shop Around the Corner is a rom-com, and since Hollywood has been churning them out with regularity over the last 30 years or so, there isn’t a plot twist here, or story beat, you won’t see coming.  Or, at least none that will surprise you.  But just because we say, “It’s all been done before,” doesn’t mean seeing it again is invalid.  Nor, does a feeling of predictability mean it’s no good and unworthy of attention.  Indeed, if a movie still manages to entertain and captivate even when faced with those issues, then you know you have something special.  So long as it’s all executed well, that justifies anything.

And, bluntly, The Shop Around the Corner executes well.

Naturally, the most important part of any rom-com is the complexion of the romantic pair at the heart of it.  If the actors can carry the weight, and have the right chemistry, the piece can sing.  If not, it’ll be dead on arrival.  Fortunately, both Jimmy Stewart and Margaret Sullavan have the chops here for the pace of the dialog and the turns in the plot.  Better, they have chemistry with one another to spare.  Both are effortlessly charming and eager – believably so – which makes their friendly sniping back and forth all the more cutting.  In her scenes with Stewart, Sullavan is so effortlessly the bitch to him it is literally breathtaking how quickly she cuts him to size.  Similarly, Stewart is so easily dismissive of Sullavan early on it’s almost fiendish.  In a way, they play this film almost as if they were early, newlywed version of Martha and George for Who’s Afraid of Virginia Woolf?, back from before the honeymoon period wore off for that couple and their friendly banter curdled to acid.  It’s a shame Sullavan has already dead by the time Mike Nichols adapted Who’s Afraid of Virginia Woolf? for the screen, because you don’t have to squint hard at all to imagine the interesting turn Sullavan and Stewart might have had on that show, even if they both would’ve been several years too old for the parts as written.

But it isn’t all about the fighting for Stewart and Sullavan – that’s never enough.  No, you can also see how, if their characters would just stop sniping at one another for a moment, they might truly fall in love.  You can see the undeniable attraction simmering just below the surface of their tete-a-tetes.  For instance, after Stewart has learned of his pen-pals true identity – but before Sullavan has learned the same – he playfully tests the limits of her attraction to the penal/hatred of Stewart to gauge what he should do with his information.  Particularly, he wants to know how unhappy she’ll be   that his letters oversold his importance.  His best scene, though, is certainly the one where the two of them are discussing the Christmas present she’s going to give her anonymous pen-pal when they finally meet face-to-face and, because Stewart doesn’t want that gift, he not-so-subtly pushes her towards the wallet her really wants instead.  Genius.

Sullavan, though, has him beat.  Yes, the most memorable scene between she and Stewart is easily their encounter in the café, when she’s gone to meet her anonymous pen-pal for the first time and, rather than sit down and fess up to his true identity when he arrives to find her waiting, Stewart comes in and just acts like her co-worker.  The scene crackles as Sullavan constantly tries to reassure him he will never measure up to her pen-pal, even as Stewart knows she actually talking about him.  But while that scene crackles, Sullvan’s best moments revolve around the letters themselves.  The look of disappointment on her face when she opens the mailbox to see it empty of the expected arrival and, later, when her landlady brings in the letter and she immediately lights up.

Credit must be paid to Lubitsch for directing the film well.  No, it’s not overly beautiful to look at, and it’s not fancy, but the tension and pacing are managed perfectly and, even if I’m not quite sure what the Lubitsch touch truly is, at least I can say in this instance he did something right.

One entry in The Best Picture Project was for Frank Capra’s Best Picture winning You Can’t Take It With You.  Because that film shares many plot and cast elements with It’s A Wonderful Life, it almost plays like a dry run for that film.

While I wouldn’t necessarily call The Shop Around the Corner a dry run for anything – except years of romantic comedies in which strange coincidences lead to love – it does have a pre-Wonderful Life feel to it.  After all, aside from Jimmy Stewart to tie them together, Shop takes place at Christmas, and features It’s a Wonderful Life actors Charles Halton (Mr Carter, the bank examiner) as a detective, and William Edmunds (Mr. Martini) as a waiter. 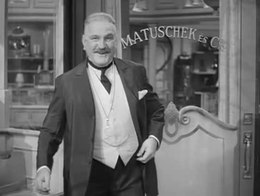 For bonus points, Frank Morgan, who plays Mr. Matuschek here, was the Wizard in The Wizard of Oz.

[1] To be fair, the only reason I finished The Love Parade was I had to for the project.

[2] To be clear, ‘Leather goods’ is not a euphemism for bondage, or fetish gear, though it would certainly make a rather interesting change to this film is it were.