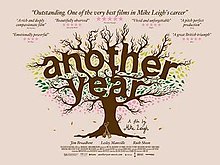 Spanning four seasons (Spring, Summer, Autumn, Winter), Another Year revolves around a long-married couple, Tom and Gerri (Jim Broadbent and Ruth Sheen), as they interact with the various friends, family, and co-workers in their lives.  There is Tom’s friend, Ken (Peter Wright), his brother Ronnie (David Bradley), Gerri’s client, Janet (Imelda Staunton), and Tom and Gerri’s son, Joe (Oliver Maltman).  The most enduring of the friends, though, is Gerri’s co-worker, Mary(Lesley Manville).  Mary is a longtime friend of Gerri’s, mostly harmless, who has been sweet on Joe for years, despite the sizeable age difference between them, and the oddly incestual feel to Mary’s attentions.  Things come to a head when Joe introduces his new girlfriend, Katie (Karina Fernandez), to the family, which causes Mary to not-so-subtly break.  Offended by Mary’s behavior, Gerri basically ghosts her, though in the end Mary comes round and atones for what she’s done.

What Did We Think?

Like most of Mike Leigh’s films, Another Year is a character piece, short on plot.  Indeed, if there were an overarching plot to the film at all it would be Joe gets a girlfriend, and Mary comes to admit her shortcomings to herself.  Which is obviously not much of a plot at all.  Meaning, if the film succeeds, it’s because the actors showed real skill in making compelling characters.

As the patriarchal figure of this assembly of people, Tom, Jim Broadbent is jovial and warm, practical in most every way, and feels exactly like the sort of man you’d pick out of a catalog if you were looking for your own father or grandfather.  Affable, a bit scruffy around the edges, not too-stern, and entirely approachable.

Gerri is also a character short on stern, and large on approachability.  As a psychological counselor, these are essential tools to her work, but are also tools she cannot compartmentalize.  In her portrayal, Ruth Sheen makes Gerri a woman who cannot really turn off her job at all, such that even when she’s angry with Mary’s behavior in treating Katie so poorly, Gerri does not raise her voice, just ever-so-slightly reminds Mary of Mary’s place, then very quickly cuts her out of her life.  In here we see a woman that, good or bad, cannot help but live her life as if she’s conducting a counseling session every waking moment of her life, and yet, when the counseling doesn’t work, she throws the towel straight in.

As Mary, Lesley Manville is the central figure of the piece, and her Mary is worthy of that attention and has the greatest arc.  At the beginning, Mary is a bit of a tiresome woman.  She’s chatty, forced in her joviality, and overly broad.  She’s needy to the extreme and seems drawn as a caricature.  But Manville isn’t about to play it that one note and very quickly we understand, through Manville’s looks and eyes,[1] that Mary is a quite damaged, still reeling for a divorce in her youth.  But unlike others who might lament their station in life and give in to being maudlin, she’s desperate to connect.  And this much is clear: because Mary is never small in her emotions we are always aware that she’s never far from the point of spinning out completely.

Manville’s best scene comes during the lunch with Tom and Gerri, where she meets Joe’s new girlfriend, Katie.  Almost instantly Mary turns deathly cold to Katie, though Katie is too dense to really clock it.  Overall, it is full of little comic moments that were perhaps heightened by the discomfort we know everybody but Katie is feeling, and Manville’s performance there feels like a literal dry-run for Manville’s scenes as Cyril in Phantom Thread, when she’s not-so-subtly taking the piss from Daniel Day-Lewis’ Reynolds Woodcock.  The only difference is while Cyril is ever in control, Mary barely seems to be holding anything together.

All that aside, as bad as Mary is in her intentions towards Joe, I can’t help but feel she’s dead on with Katie.  After all, when we meet Katie she is relentlessly chummy, but only in the shallowest, most enervating way possible, and – I won’t lie – I hated her on sight.  But do not mistake, this is not me condoning Mary’s overall behavior in flirting with Joe, as much as it is me saying that, Maybe she was right about this one.

On the whole, the acting in Another Year is quite lovely, and that’s a good way to describe this film: lovely.  Unlike Secrets & Lies, which looked and felt dour, and was tiresome in the depressive shrieking of the characters, Another Year is so much brighter and open, and relatable, even as it plumbs many of the same unspoken pains running through Secrets & Lies.  And it feels more refined, making clear that this sort of film is so dependent on execution to be successful.  When handled poorly, like Secrets & Lies, it becomes off-putting.  But when managed skillfully, as it is here, it is a thing of beauty.

Another Year was faced with The King’s Speech, The Fighter, Inception, and The Kids Are All Right in the Original Screenplay category.  The King’s Speech was the winner there, and given that film won a handful of awards, it seems like Another Year never had the chance.  Moreover, in a category with films requiring such precision in their story – Inception, in particular – or were nominated for Best Picture – The Fighter – Another Year was never going to win.  And on the whole, that’s fair.  Because, while Another Year is a lovely movie, it’s also not one dependent on the writing, and so while I’m appreciative for having seen it, and it having been made, I don’t feel it was hard-done by losing.

[1] Manville is so damned good with her eyes that it’s almost sickening.