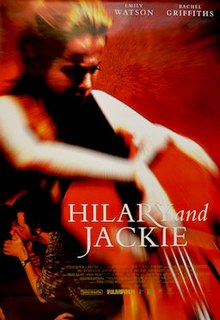 Emily Watson had never been in a film before her breakout role in Breaking the Waves.  Perhaps being unknown helped her intense, emotional, and sexual performance land with such a wallop.  Or, it could be she’s simply a fierce actress, capable of that sort of performance day-in and day-out, and didn’t need a longer film history behind her to show it.  And there may be the truth of Emily Watson: she was a quality actress from the jump, even if the individual film itself is not.

Of her work I’m partial to two in particular.  The first is her turn as the hungry, wanna-be Broadway actress Olive Stanton in Tim Robbins’ Cradle Will Rock, a criminally underseen film deserving of rediscovery/appreciation.  Better, though, is the incomparable magic she serves up as Lena Leonard in Paul Thomas Anderson’s Punch-Drunk Love.  Sure, Adam Sandler got the credit there for proving he can be more than just an overgrown man-child, but if not for Watson to play off of, it might’ve flailed.[1]

But even as she’s had a good career, I’ve not seen nearly half of what she’s been in, which is why I was quite pleased to find that because I’d seen every other major nominee in 1998,[2] I was left with almost-no choice but to take in Emily Watson, and Rachel Griffiths for their nominated work as the real-life sisters Hilary and Jackie, in the film Hilary and Jackie. Sisters Hilary and Jackie are two precociously-talented musicians, one a flautist, the other a cellist.  Early on, Hilary is the more lauded of the two, routinely being singled out for her flute playing, to the exclusion of Jackie.  Except, that success drove Jackie in her own playing and eventually she eclipses her sister to become the premier cellist in the world.  But, going from top dog to bottom dog is hard for Hilary to take and despite her talent, she all-but gives up the flute to marry and raise a family in the country.  Worse, though, is even as top dog, Jackie still behaves like the bottom dog, driven to destruction by her lingering resentment for what her sister has.  So, Jackie all-but does in that relationship with her emotional abuse and manipulation.  It is only in the end, after Jackie has been ravaged by multiple sclerosis, and on death’s door, that the two sisters make peace, even if it feels like it might be too little, too late.

Unlike your standard musical bio pic, which relies on a soup-to-nuts narrative, stopping only to enjoy the musician’s greatest hits, Hilary and Jackie does not follow a straight ahead, linear path.  Rather, it tells itself in four distinct chapters, some of which loop back over themselves – two are named for the girls, Hilary and Jackie, while the other two are sort of loosely arranged together, but remained unnamed:

Also unlike your standard musical bio-pic, Hilary and Jackie is almost completely uninterested in the music.  Certainly, it is there, but because these women were not popstars in any sense of the word, it is not a greatest hits package in Walk the Line, or Bohemian Rhapsody.  Rather, it’s about two women and their relationship with each other, and about how they play what they play, rather than what they play.  And though this film is aimed at an audience that probably has a better-than-average familiarity with classical music, the reality is these pieces are never going to be bangers, even for those familiar with them.

Rachel Griffiths plays Hilary, the sister with the love of music instilled in her by a demanding, doting, mother, which is ultimately beaten out of her by a stern, inflexible, and wrong-headed teacher.  But though another movie would play this turn of events as tragedy, here it is simply another step in a person’s life.  In the same way you might give up any other thing that no longer brings you joy, Hilary gives up the flute and seems content to do so, turning her attentions instead to her family.  While Griffiths’ performance would almost seem nothing-special, that she makes the abandonment of the flute look so effortless and acceptable is the true brilliance of her work.  She is not tortured by the decision, she is simply at peace by it, and sometimes being at peace with your choices is the hardest thing to do.

Besides, it’s not as if the role of Hilary offers Griffiths nothing to do.  After all, after some time apart Jackie comes out to Hilary’s country house and basically demands Hilary turn over her husband to Jackie so he can be her lover.  This, she reasons, is the only way to prove Hilary loves her.  And Hilary gives in to this demand, but even in doing so she is anguished by it and certain to hold onto her husband all-the-tighter after he and Jackie have become lovers, so that he does not float away with Jackie.  Griffiths plays that well.

Best Supporting Actress 1998 went to Judi Dench for Shakespeare in Love, which is one of those towering performances that sticks in the mind even as it’s no more than ten minutes of screen time.  As the aging, brassy Queen Elizabeth, Dench is powerful, magnetic, and basically walks away with the film.  Certainly it’s a part any actress would want, but it’s also one that could become campy if not handled properly.  In other words, it’s a big performance that requires gravitas to make it stick, and that’s what Dench brings to the role: gravitas.  And while there are times when big performances are unjustifiably lauded,[4] there are times when they’re lauded for a reason.  Dench’s turn is one of those.  Under the circumstances while Griffiths is fine in Hilary and Jackie, it was never in the cards for her to upend the force that is Judi Dench.

As Jackie, Emily Watson has the bigger part in the film, and the better, given she has much more to play.  In the role she is asked to be the free spirit, flirty and sexy, but also to be jealous of her sister, both for her talent and for her domestic bliss.  And while in Hilary’s section Jackie simply seems impulsive, demanding, and destructive, we see in her own parts she is driven as much by loneliness and homesickness than anything else.  Better, through the two sides Watson is to play, we see Jackie largely as unsatisfied by life, and incomplete as a person.  Of course, because Jackie eventually succumbs to multiple sclerosis Watson also gets to do the sort of big, physical acting that men routinely win Oscars for,[5] but women never do.

Best Actress 1998 was Gwyneth Paltrow in Shakespeare in Love, which you’d have to think Paltrow won for no other reason than not only does the film ask her to play Romeo and Juliet, it literally has her perform both Romeo and Juliet, depending upon when we are in the film.  At the time the film came out I thought Paltrow was good, even if dubious of her accent work.[6]  When I approached that film for The Best Picture Project I remained unconvinced, and while others might be able to get by it, it taints her performance for me in ways that cannot be rescued.  Under those circumstances, it’s easy to declare Watson Better Than Best.

But don’t make this mistake – I would not award Watson the Oscar simply because Paltrow is not good enough.[7]  Rather, I would award Watson the Oscar simply because Watson is terrific.  After all, Watson makes her work look coherent in a film that views her character from so many fractured points of views that we never see a consistent Jackie.[8]  And yet, Watson makes her one Jackie, bringing a humanity to all aspects of the character that unifies it into a single whole.  That she does this with ease is what should have won her the Oscar that instead went to Paltrow.

[1] Although, knowing PTA’s ability to get good performances out of actresses, I’m sure he could have rolled with it.

[2] Well, I actually saw all the major nominees in the top 8 categories, except for three of them in the Best Actress race.  Two years in a row I had that problem and I swear there’s nothing to it other than overlooking what was right under my nose.

[3] Amongst the chaos she brings is her own emotional instability and her need to have Hilary’s husband as a lover, which she eventually wheedles out of Hilary.

[4] For example, Gary Oldman in The Darkest Hour

[5] Daniel Day-Lewis in My Left Foot, of DeNiro in Raging Bull, or Dustin Hoffman in Rainman,

[6] Obviously, I have a thing for lousy accents, as this piece follows The Wings of the Dove, which specifically talked about Helen Hunt’s accent work in As Good As It Gets.

[7] Don’t take this all to think I dislike Paltrow – I truly enjoy her work.  She’s probably the best thing in most of the Marvel movies, and she was quite enjoyable in that lousy Johnny Depp movie, Mortdecai.

[8] Hell, at once point Jackie puts on an affected accent for no reason that anybody can explain.