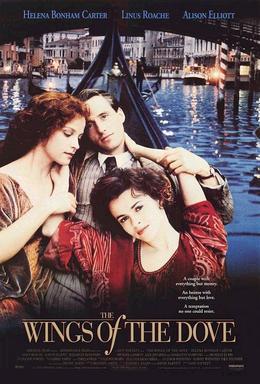 Screenplay by Hossein Amini, from the novel by Henry James

Here we are again, folks, with another installment in this series about something other than a Best Picture Also-Ran, owing to 1997 being a year in which I’ve seen all the Best Picture winners and losers.[1]  The same goes for the Best Director race, and the Best Actor and Supporting Actor/Actress Races – seen ‘em.  In fact, I’ve even seen all 10 of the movies nominated in the screenplay categories as well.[2]  I could have taken a dive into the Foreign Language Film or Documentary categories – after all, everybody could use a little more foreign exposure in their lives, and the Documentary Feature category included 4 Little Girls from Spike Lee.  But, as I enter the homestretch on this project I want to be laser-focused on what’s readily available, and so here we are with a Best Actress loser.[3]

Also, I’ve only seen two of the nominated actresses in their films, so that seemed a better place to make my play.

The nominees for Best Actress 1997 were:

The two nominees I’d already seen were Helen Hunt and Kate Winslet.  Of the other three, I skipped Judi Dench in Mrs. Brown by virtue of having run through Iris and Philomena very recently, so it might be a good time to look elsewhere.  Of the last two, Julie Christie or Helena Bonham Carter, the choice between them was easy, if a bit retrograde on my part.  Honestly, I’m not ashamed to admit I skipped Christie not because she’s already in an entry in this series (Darling), but because I fancy brunette women with somewhat-wild hair more than I do blondes.  I have nothing against blondes, by any means, just prefer brunettes, anymore than I have anything against short women.  I just fancy a different type.  So, rather than see a later-career performance from the famously-blonde Julie Christie, I chose the curly-haired brunette, Helena Bonham Carter in The Wings of the Dove. 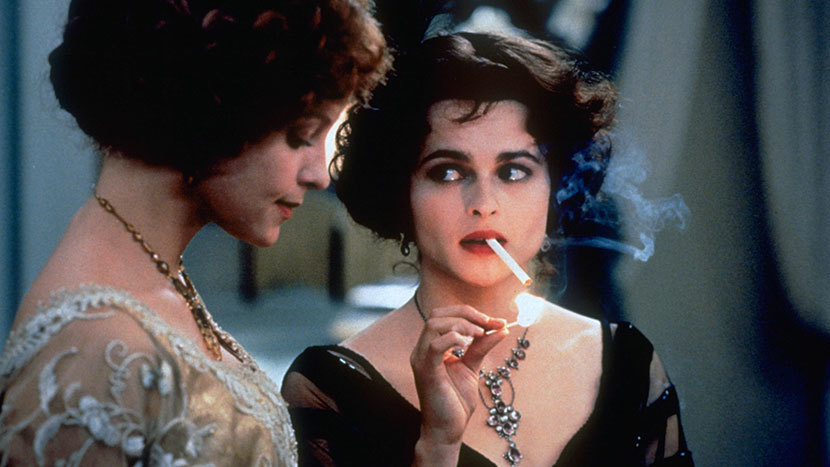 London, 1910.  Kate (Helena Bonham Carter) lives with her wealthy, controlling aunt (Charlotte Rampling), a woman who neither approves of the Kate’s low-class father (Michael Gambon), nor her choice in men, particularly her interest in Merton, a journalist (Linus Roach).  Because Kate does not wish to lose the financial favor of her aunt, she keeps her affair with Merton secret.  However, she soon realizes that if she can independently secure herself financially, she can do as she pleases with whomever she pleases.  And to be clear, she please with Merton.  To secure herself, she ingratiates herself with a wealthy orphaned woman, Millie (Allison Elliott), who just happens to be knocking on death’s door.  Running off to Venice with her, Kate invites Merton to meet them there, aiming to place him as a suitor to Millie and secure an inheritance upon Millie’s death.  Only, the plot works a little too well and Merton falls in love with Millie, and when she dies, he refuses her money, preferring his memories of her pure.  In the end, Kate finds herself both without a man, and without a fortune.  As before, she remains dependent upon her aunt.

The Wings of the Dove is definitely a romantic movie in sensibility, rather than one rooted in reality.  Emotions are heightened, characters do not act the way normal humans would, and are always pining and longing for things they can’t have, almost to the point it paralyzes them.  This is obviously both a blessing and a curse because, if you’re into those sorts of stories, this one will speak to you.  Otherwise the plot here will be completely ridiculous and silly.  But, as I tolerate more than a fair amount of silliness in other films – oh, I really love the Andy Samberg bomb, Hot Rod – I was not put off by the plot here, even if it’s outside my usual area of interests.

As mentioned above, the nominees for Best Actress 1997 were:

I’d previously seen both Helen Hunt and Kate Winslet, and of the two I prefer Winslet.  Yes, Titanic is admittedly ridiculous[4], but Winslet is the glue holding it together, even if her character is problematic.  Honestly, both her’s and Hunt’s characters are problematic.  In Hunt’s case her accent work in As Good As It Gets is middling, at best, and try as she might I just don’t buy her falling in love with Jack Nicholson’s Melvin.  On the other hand, Winslet’s Rose just seems a bit like a petulant child at times, which I found disarming when I was 22, but off-putting now I’m a man of 43.  I mean, for god’s sake, in the movie she’s a 17-year-old child, and acts like it, and that’s she’s the romantic hero is just tiresome.  Sure, Winslet does everything she can to rise above it, and mostly succeeds, even if she does not entirely pull it off.

In comparison, Carter gives a stellar performance in The Wings of the Dove, even as the film has its own shortcomings.[5]  As Kate she is a mostly-quiet entity, subservient to her aunt and her aunt’s money, if only because she needs the aunt’s largesse to survive.  But though Kate plays herself as fragile and resigned, the truth is there is defiance and toughness in her – quietly defiant and tough – and she is a character constantly building a scheme.  She is complex and full of guile.

Watching Carter perform as Kate, you see the wheels always turning behind the character’s eyes, trying to find the angle she can play, and when she does find it, seizing upon it in an instant and never letting go.  Though she seems proper, there is a nastiness in what she’s going to do, which is to pimp out her lover to a dying woman, to steal that woman’s money from her when she dies.  It’s hardly a heroic act.  Yet, Carter redeems it.

In the hands of another actress, Kate would be played hissable and one-note.  Everything that is subtext in Carter’s performance would become text in another’s hands.  Or, it would simply become obvious and laughable.  Carter, though, gives us a Kate who plays as real.  She plays as vulnerable, even as she acts with malice.  And she is malicious and does villainous things, yet somehow our sympathies are with her.  In Carter’s capable hands we accept a woman so desperate for the love of this one man that we’ll forgive her most anything in order for them to be together, even if she winds up losing it in the end.

And Kate does lose him in the end, in a very expected, and tragic way.  When they’ve all returned from Venice – all but Millie, who has died – Kate has sex with Merton.  Merton actually returned from Venice after Kate and has purposely avoided her, which she knows is a bad omen.  In one last ditch effort to have him she strips completely bare.  Yes, the nudity titillates and tempts him, but it also serves a purpose.  It makes him see she is totally committed to him, that this naked creature is who she is, and there is nothing more.  In other words, she gives him the ultimate in vulnerability in the hopes he’ll return her desire.

In the end, though, he rejects her.

Of the three – Hunt, Winslet, Carter – Carter’s is the best.  And if the movie had allowed her just one, big emotional scene, the Academy might have agreed on this point.  After all, while Hunt gets to try on an accent, and Winslet gets the borderline-shrill performance, Carter’s is at all times restrained.  Even as she is at her most jealous and trying to destroy the growing bond between Millie and Merton, she hardly raises her voice at all.  Too often with the Oscars they won’t give you the award unless they get to see you Act! with a capital-A, and because Carter is in a movie comprised entirely of lower-case-A acting, it was never in the cards for her to have the Oscar.

[1] The next installment of this series, Hilary and Jackie, has the same problem, coming in a year in which I saw virtually everything as well.

[2] To be fair, these races involve a total of 18 films, of which I’ve seen 14.  So, not all that impressive when the Big Eight races conceivably could contain 40 movies.

[3] Of course, doing 4 Little Girls in the year of Blackkklansman definitely offers up interesting discussion options.

[4] Remember, I do not mind the ridiculous.

[5] Prime among them is the film shuffles Carter out of the picture for more than 20 minutes in the back half, rendering what should have been the juiciest parts of her performance to the dustbin.