Screenplay by Calder Willingham, based upon his book

I sometimes wonder what it’s like growing up as the child of a famous person.  Or a rich person.  Which is obviously the greatest indication of my background that I can ever give you, because if you ever have to wonder what wealth and fame does to kids, it usually means you had neither when you were a kid.

Anyway, I have it in my head that living with a parent’s wealth and/or fame warps a person and their worldview.  When it’s fame it’s living in a world where everybody thinks your parent is great and are lauded with attention.  Just having that sort of attention shining around you can be a problem one its face, as everything you do is suddenly noticed.  Worse is if you don’t ever do anything to earn the glow yourself and have to deal with it going away.

The same for wealth.  Only unlike fame wealth can last.  Which means you don’t necessarily have to deal with it going away, but have to deal with how it allows people to give in to their baser instincts and gives them strange ideas about those without wealth and how they failed to achieve it.[1]

In today’s world there are no better examples of this than Donald Trump Jr., and Eric Trump.  Boys that grew up with a wealthy, famous father, who will never live up to being half of what their father is.  Which should be a good thing, given how terrible their father is, but might actually be the ultimate punishment, given how much they try and fail to become him.  It must be soul-crushing as hell to realize you will never be the person your parent is, no matter how many mountains of cash you get to roll around on.

But just as I think about how fame and wealth warps the children of the famous and wealthy, I think about what it has to be like growing up the child of a mid-level famous person, or a mid-level wealthy person.  Not the child of somebody who is a Movie Star, but the child of a movie star.  Or, the child of a character actor.  The child of a person who, no matter how known they are, has to scrap and grind to earn a living.  Yes, the life can be comfortable, but the comfort is not so great that the well can’t conceivably run dry at any moment.  Under these circumstances you’d think the children aren’t warped by the wealth and fame, but are empowered by it.  Because they see that wealth and fame isn’t given, but earned.

Obviously this is relevant here because this entry is about Laura Dern.

Laura Dern’s parents were famous – basically – since before she was born.  Bruce Dern did work in westerns and biker films, before transitioning to being something like the second lead in lots of 70s movies.  Diane Ladd had basically scraped around as a TV actress for 15 years or so before she finally made the transition to film, eventually earning a Best Supporting Actress nomination for her work on Alice Doesn’t Live Here Anymore.  So, while they were both known, they weren’t on the same footing as their contemporaries like Jack Nicholson, no matter how many movies they did together.  Boil it down to this: while those two could be in the same movies as Nicholson, they were never making the same money he was.

Yes, it is without a doubt that Laura Dern benefited from her parent’s access to Hollywood in a way the general public would not when she decided to go into acting.  But, at the same time, it’s not as if her parents could kick open any door for her they wanted.  She still had to have talent and do the work, and I suspect that seeing her parents go through a career as workaday actors had a positive effect on her, and is why she’s had a fairly unpretentious career, in which she’s treated all her parts fairly, and never acted above them.

Which leads me to this: While it’s likely wealth and fame warp people, it’s not always in a bad way. 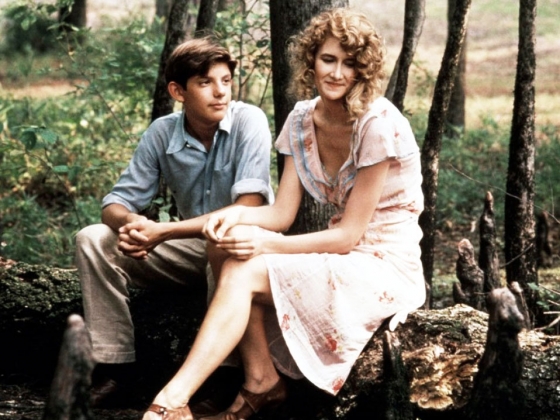 Late in the Great Depression, Mr. and Mrs. Hillyer (Robert Duvall and Diane Ladd) take in Rose (Laura Dern), ostensibly as a live-in domestic servant, but really to help her escape her troubles and the inevitable slide into prostitution she was facing in her hometown.  Rose is a naïve woman, she is also very knowing, and has intense feeling, who either becomes infatuated too quickly – as she does with Mr. Hillyer – or is over-alluring, as she is to the Hillyer’s son, Buddy (Lukas Haas).  She’s also an intensely sexual woman who is almost innocent in her sexuality, which can be a problem, as she pretty much leads on everybody she meets.  In the end she takes on a lover or two, develops an ovarian cyst, and eventually marries a police office who broke up a brawl between two men who were fighting over Rose.  Somewhere in there is something of a happy ending for Rose.

Rambling Rose is a strange movie, existing not as one movie, but as an uneasy blend of many other movies.  Or, other styles of movies, with different tones.

On the one hand it’s a comic proto-Wes Anderson film about a quirky family who all have their affectations of speech and habit when dealing with one another, and who are all precocious in their own way.  On the other hand, it’s a sort-of political movie about the sexual liberation of women, voiced most clearly by Mrs. Hillyer when faced with explaining Rose’s escapades.  Then, on the other hand, it’s a stark drama about paternalism and misguided prudishness, particularly in a scene where a doctor proposes to Mr. Hillyer that a hysterectomy might be the right thing to cure Rose’s promiscuity, and since she has to have that ovarian cyst out, they can go ahead and take her uterus while they’re at it.  Then, finally, there’s an uncomfortable mix of not-quite-sexual-assault involving a minor that sort of lingers in the air like burnt toast.

In the end, it is the uneasy shifts in tone that hinder Rambling Rose because, try as it might, the film just does not coalesce.  Nor does it move easily.  Rather, it lurches from mood-to-mood and scene-to-scene.  A generous reading of the film would say the form of the film matches the character of Rose.  As she is a woman with big emotions who struggles to contain them, it makes sense the film would swing all over the place.

But that’s a generous reading.

An honest reading says the film is clumsy and that while it’s not terrible, and has many good pieces, they do not come together as a satisfying whole. 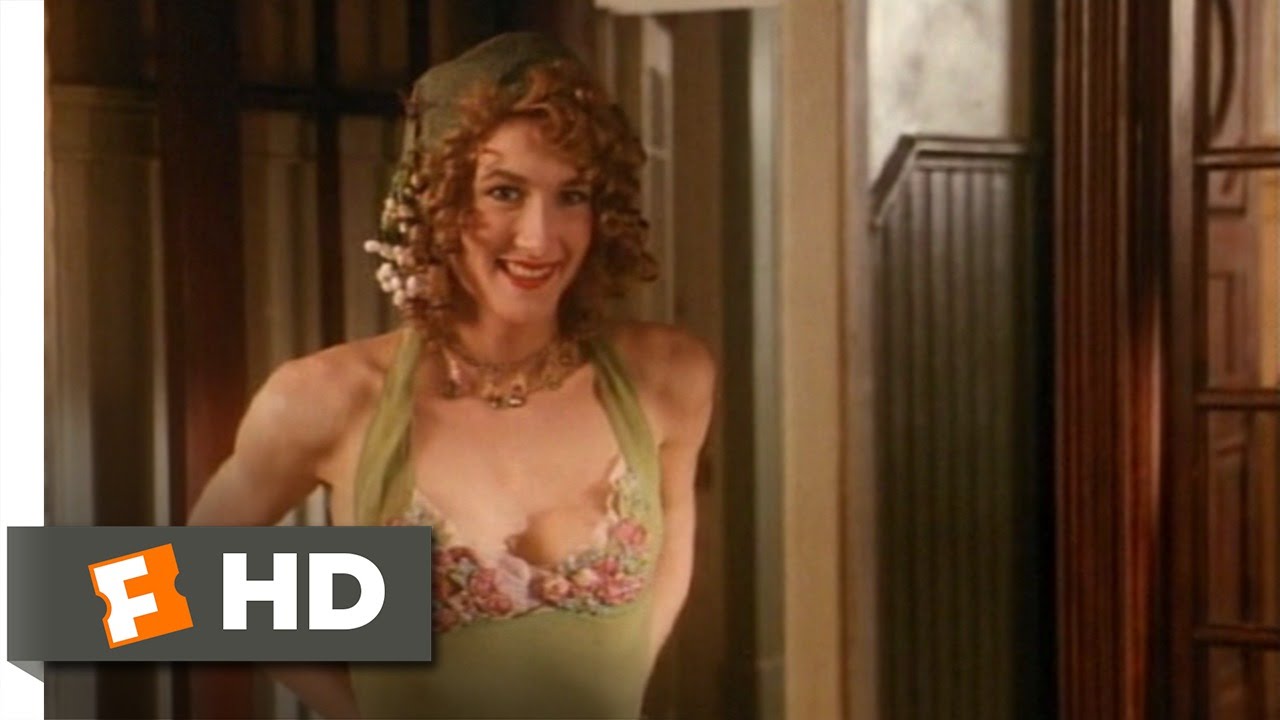 Laura Dern earned her first Oscar nomination for Rambling Rose.  Diane Ladd earned her third.  Together they were the first mother-daughter pair to be nominated in the same year, for the same film.  But, while these are all great accomplishments, both women went home empty on Oscar night, seeing other competition take the prize.

In Dern’s case, the win was never in the cards.  After all, 1991 was the year of The Silence of the Lambs, when Jodie Foster’s second Oscar was never in doubt.  But even if there were not a Jodie Foster in the race, 1991 was also the year of Thelma & Louise, which surely would have won either Geena Davis or Susan Sarandon a Best Actress Oscar if Jodie Foster weren’t standing in the way.  Under those circumstances, Dern never has a chance, and honestly, that’s fair.  But while the other three ladies give near-iconic performances, this does not mean Dern is not any good, because she often is.  She’s quite sexy and smoldering, two qualities she showed the year before in David Lynch’s Wild at Heart.  But she’s also earthy and honest.  It’s a performance with a lot of facets that allow a lot of different looks at Dern’s range.  The problem is the film doesn’t seem to know what it wants her to be, or how to harness her range.  Does it want her to be the innocent?  Or the sex pot?  Or naïve and knowing?  Or the woman just looking for true love?  Or does it want her to be all those things at once?  Because the film never quite figures out how to play her, and itself, it squanders what could have been the greatest performance Dern ever gave.

On the other hand, Ladd going home empty-handed on Oscar night does not look like it was ever a foregone conclusion.  The winner of the Oscar was Mercedes Ruehl for The Fisher King, which is lesser Terry Gilliam if there ever was a lesser Terry Gilliam film.  And while I remember Ruehl being fine in it, she was never so fine that her performance has stuck in my mind all these years since I last saw it.  The same can be said for Kate Nelligan in The Prince of Tides, and Jessica Tandy for Fried Green Tomatoes.  Neither were really essential performances, or all that memorable.  The only other nominee that still lingers in the mind all these years later is Juliette Lewis in Cape Fear, who plays a role very similar in many ways to Laura Dern, only does it as an actual teenager.

Amongst that group of women there’s no reason Ladd shouldn’t have won.  After all, her turn as Mrs. Hillyer is quite delightful, and allows Ladd a truly complex role that’s short on camp.  Because while Ladd is allowed to use her smile for beauty, rather than menace, she also gets to demonstrate herself as a quiet force of nature, a woman capable of barreling through men without even so much as raising her voice or throwing hands.  Her best scene is the one in the doctor’s office, where the men are discussing the horrifying thought of spaying Rose, “For her own good”, they reason, and Mrs. Hillyer turns her righteousness on the both of them with a quiet intensity that shuts them both down in an instant.  While Robert Duvall has the task of being believably broken by her in that scene – and he is believably broken – it’s up to Ladd to be the woman who can break him.  If there’s any scene in the movie that earned Ladd the nomination it’s this one and, honestly, probably should have earned her the Oscar.  While the other ladies in the category were mostly replaceable in their films – except Juliette Lewis – Ladd is the beating heart of Rambling Rose and the movie just does not work the same without her.

[1] Almost like they don’t understand you have no control over whether or not you were born with wealth.