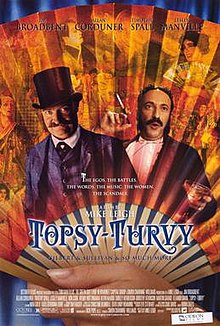 There was no reason I had to reach down to a Best Original Screenplay loser to find a 199 entry for this series.  After all, while I’ve seen everything in the 1999 Best Picture and Best Director races, there were various lead acting losers who’s films I’d not seen: Sean Penn[1] in Sweet and Lowdown; Denzel Washington in The Hurricane; Janet McTeer in Tumbleweeds; Julianne Moore in The End of the Affair; and Meryl Streep in Music of the Heart[2].

So, if I had all those options from the acting categories alone, why did I reach so far down to find Topsy-Turvy?    The short answer is Mike Leigh.

The longer answer is while Mike Leigh is one of the notable figures of modern British cinema, I’ve only ever seen one of his films: Mr. Turner.  And while it introduced me to an artist I’d never heard of before – J.M.W. Turner – I found the film a bit dull, even if it was pretty gorgeous to look at.  Anyway, because I’ve only ever seen that one Mike Leigh, this seemed like high time to get in another.

Beyond that, Jim Broadbent stars here and at the time was just a few years away from collecting a Supporting Actor Oscar for Iris – also an entry in this series.  Under the circumstances it was a nice bit of synergy to round out my knowledge of both men and their filmographies.

Following the opening of their musical Princess Ida, Gilbert (Broadbent) and Sullivan (Corduner), cast about for a follow-up.  Gilbert is content to put together a show along the same lines as earlier show, using all the topsy-turvy[3] elements and plots he’s become accustomed to,  particularly the use of magic spells and magical items.  On the other hand, Sullivan has no interest in working on the same old things, or anything he considers beneath him; in short, he’s tired of the same old W.S. Gilbert libretto and longs to write grand opera.  Eventually, though, they settle on a Japanese-inspired story for their next work, The Mikado. 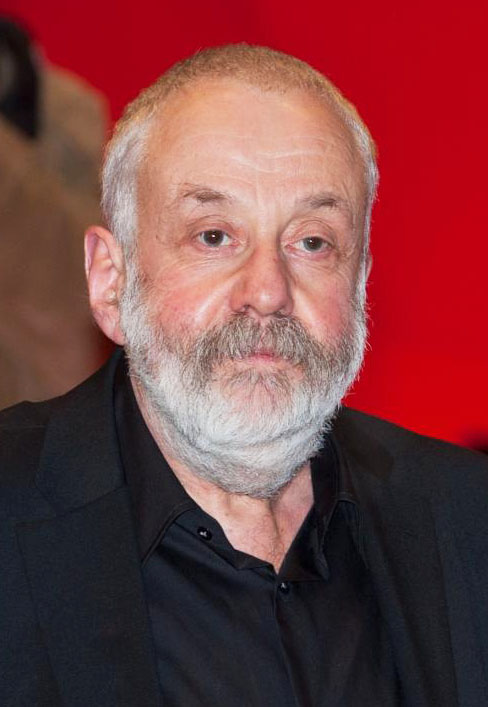 For some reason I always had it in mind that Mike Leigh was a kitchen sink style director, who favored loose, improvisatory performances in a more natural setting.  To me, I always pictured his films as being somewhat muddy – muddy emotional, muddy dramatically, and muddy visually.[4]  Whether all that is true or not, I can’t say, though it can’t be far from it.  After all, just Wikipedia confirms one part of that by telling me Leigh favors lengthy rehearsal and improvisations to get the script dialed in, the fact that his films are decidedly British gives them the definite feel of overcast skies. All that said, Topsy-Turvy is hardly a loose, improvisatory kitchen sink style drama.   Moreover, it’s not muddy at all.  Instead, there is a definite level of precision to the plotting and language, and given how opulent the film is – it’s not opulent in the sense of The Last Emperor, but opulent in the Victorian England sense – it’s hardly a realist drama either.  Rather, it’s a glorious romp about two men building a show together from the ground up.

In service of this romp, the performances are uniformly great.  Broadbent is delightfully gruff and stubborn and exacting – almost curmudgeonly in his certainty – in his demeanor as W.S. Gilbert.  Similar is Corduner’s Arthur Sullivan, who layers stubbornness with a barely-concealed contempt for things he feels are beneath him.

The supporting cast acquits themselves just as well, with Lesley Manville being particularly fine as Gilbert’s wife, Kitty.  Having only known her as the taciturn and icy hatchet-woman Cyril in Paul Thomas Anderson’s Phantom Thread, it was exhilarating to find her here as a talkative, charming, outgoing woman, who ultimately carries a sense of melancholy and grief in her eyes.  Under the circumstances, it’s easy to see why Leigh would cast her again and again, and why PTA would cast her as well – the sort of magnetism and charm she carries is something to be held at a premium.

In some ways the film is a quasi-adaptation of The Mikado, what with the way it presents the construction of that play and it’s music from inception, to the blocking and rehearsal of various scenes and songs, to opening night.  In this way it brought to mind Michael Winterbottom’s Tristram Shandy:  A Cock and Bull Story, which employs the same sort of approach to the material: adapt the material by not adapting it at all.

But, much as I enjoyed it, there is one quibble with the film: it’s too long.  At 2 hrs 40 minutes, it approaches epic length, and does so without hardly ever going outside – there is certainly no landscapes or vistas to linger or behold.  Rather, the film achieves it’s epic length by letting the plot meander liberally.  On the hand the meandering felt appropriate, given that the act of creation is never a straight, concise line.  On the other hand, it is possible to have too much of a good thing.  The problem isn’t the creation of the play itself drags things down, as much as it is the need to build out the world around it, and build out the many characters traipsing through it.  Might that I be smited for blasphemy, but too many of the characters are given their own little grace notes, with many that feel extraneous and open to excision.  In a vacuum, all these bits are lovely and certainly deepen the world, but I did not watch this film in a vacuum.  Instead, I watched it in my living room and there were more than one moment where I felt things stepping just over the line into tedium.

That all said, even though it’s a long film Topsy-Turvy does go down easy and, while I only saw it on Blu-Ray at home, I can only imagine how majestic the thing would have looked on the big screen.

[1] Samantha Morton was also nominated as Best Supporting Actress for the same film.

[2] This was perhaps the only Oscar nomination a Wes Craven film ever received.

[3] Oh, if you get a thrill whenever a movie says it’s title in the film, you’re gonna love how often they say ‘topsy-turvy’ in this one.

[4] By this I don’t mean actual mud, but sort of a feeling of mud.  Like looking at a piece of white paper that’s been dipped in a mud puddle.