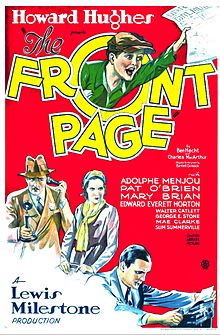 At the first Academy Awards[1] Lewis Milestone won Best Director for Two Arabian Knights, while Sunrise: A Song of Two Humans won Best Picture.  Unfortunately, both accomplishments are rendered somewhat to the dustbin of history with the Academy retroactively deciding Wings was Best Picture of the first Oscars, while Frank Borzage was Best Director  for 7th Heaven.

How can that be? you ask.

With respect to Milestone, he didn’t win Best Director – he was “Best Director, Comedy Picture” while Borzage won “Best Director, Dramatic Picture”.  And, since we all know the Oscars don’t really give a damn about comedy, or think they’re all that tough to make, Borzage’s Oscar is the only one that counts.  As for Wings, it’s recognized as the true best picture by virtue of winning Outstanding Picture to Sunrise’s Best Unique and Artistic Picture.  This, of course, is bullshit, because where is the logic of something merely “Outstanding” ever being better than something called “Best”?  It’s like giving the tip prize to second place.[2]  Anyway, the Academy cleared up the confusion the next year by combining everything into one category each – one Best Picture, one Best Director.  Then, they basically acted like Sunrise’s Oscar, and Milestone’s Oscar, did not count.

Anyway, while Lewis Milestone seems a bit hard-done by Oscar history, let’s not shed too many tears for him.  After all, overlooked or not he still got an Oscar, which is a pretty terrific consolation prize if ever there were one.  Moreover,  he would win Best Director outright just two years later for his work on the film All Quiet On The Western Front, making him the first two-time Oscar winner.

Then, following that triumph he would direct this entry in the Also-Ran’s, The Front Page, to three Oscars noms, including another for himself.

The night before a man is to be hung for killing a black policeman in a town where the black vote matters[3], a gaggle of reporters sit around the press room at the jail[4] looking for any story they can milk from the event, even if they have to make up some of the details to get it.  Amidst this, star reporter Hildy Johnson (Pat O’Brien) is getting married and looking to get out of the newspaper game – advertising’s where it’s at.  Well, his editor (Adolph Menjou) is not down with this plan and so conspires to keep his man around.

What Is This Movie?

The Front Page started as a stageplay by Ben Hecht and Charles MacArthur, running for 270 performances on Broadway.  And while Hecht and MacArthur saw themselves as playwrights first, they were not above slumming it in Hollywood to make a buck or two, and they did well in pictures – Hecht won the first Oscar for Best Screenplay for Underworld, while MacArthur later won one for himself for his collaboration with Hecht on The Scoundrel (1936).  With this pedigree, it’s no surprise – The Front Page made the leap from to stage to screen.

Once it was a movie, The Front Page was apparently successful enough that it needed to be remade three more times.[5]  First, Howard Hawks gave us His Girl Friday (1940), gender-flipping Hildy Johnson and putting a romantic element between her and the editor.  Also, it amped up the pace of the dialog, overlapping it every chance it could, making the film 10 minutes shorter than The Front Page.  In the process, His Girl Friday became a screwball classic, and is much loved.

Later, Billy Wilder took his turn at it.  His take reclaimed the original genders of reporter and editor, reclaimed the title – The Front Page – but could not reclaim the success of either earlier effort.  Wilder would only direct two more films before retiring altogether and nobody would argue his retirement came three films too late.

The last remake was called Switching Channels (1988), directed by Ted Kotcheff.  In that version the gender swap of His Girl Friday was retrieved, and the setting updated to TV news, but these were not enough to save the film from failure.[6]

Taking all these remakes together one might think the original The Front Page is some comedy classic and worthy of being remade.  And to the fools, it is worthy.  To me, though, The Front Page is neither a comedy, nor a classic.  Plus, it often plays more as a drama – a tedious drama – than anything else.

The drama is understandable – obviously in a story about a man on death row drama is unavoidable.  Even so, the film never really commits to this, veering towards what it thinks is comedy every chance it gets.  Unfortunately, if this film is a comedy, the people behind it either 1) forgot to put in the jokes, or 2) didn’t know any funny ones.

I’ll give it this – The Front Page is not subtle.  Naturally, this dooms it as a dramatic picture, but at least gives it a chance as a comedy.  After all, comedy lives in the broad strokes.  But in pursuit of these broad strokes, The Front Page defaults to simply being loud, as if loudness equals funny.  And I don’t mean loud in terms of the volume of the actor’s voices – though there is plenty of shouting to go around.  Rather, I mean loud as in its ethos.  As in its way of being.  The movie is so loud it drowns out any modulation in the story and merely runs over everything in it’s path that might be funny.  And this is truth – loudness, on it’s own, is not funny.  Worked correctly, a loud movie can be funny – after all, Who’s Afraid of Virginia Woolfe? is a very loud film that still manages to bring the humor.  It’s caustic humor, yes, but it’s humor.  The Front Page, though, is not humorous – caustic or otherwise.  Instead, it’s just off-putting.

Moreover, aside from being decidedly unfunny, and loud, the film can’t hide it’s stage origins.  After all, the story takes place in one basic setting – the press room at the jail – and the room is so generic it’s possible the film was made entirely on a single set that was redressed to appear as the few other different locations we see.  To be fair, Milestone as the director, and W. Duncan Mansfield as editor, do their best to bring life to an otherwise-stolid story, and they kind-of succeed.  Milestone lets his camera move as much as is possible in a confined space, while Mansfield overlaps the dialog as much as he can and chops up the sequences into shorter bits that make them feel at least a little propulsive.  But just because they tried tried does not mean they succeeded, and so while the film feints towards being dynamic, it’s ultimately done in by a dull, slack story.

Edward Everett Horton plays the germophobe reporter here who’s most memorable exchange in the film is asking that his hamburger sandwich be brought to him on “Gluten Bread.”[7]    He should be recognizable to regular readers of this series from his role in prior Also-Ran Project picture, The Gay Divorcee, though you might also know him from turn in Lost Horizon.  For me, though, I don’t know him so much as a face, but as a voice – he was a member of the voice cast of The Rocky and Bullwinkle Show from the 60s.  Though I was born in the mid-70s, after Rocky and Bullwinkle had run it’s course, I have distinct memories of watching reruns of it mornings before school and so had a very warm sense of nostalgia upon hearing Horton’s somewhat-prissy voice complain about the germs and the bread.

[2] Which I suppose is how Donald Trump wound up president.

[3] These are the movie’s words, not mine, and they say it like three different times, which is why I mention it here.  What’s odd is I don’t think anybody of color gets anywhere close to being onscreen.  I guess the 1920s & ‘30s were a crazy time, when a plot-point about race can be so commented on and completely irrelevant at the same time.

[5] Hollywood never met and idea they wouldn’t try to milk for every last penny they could.

[6] In addition, the play has been revived four other times on Broadway, as well as adapted for TV and radio.

[7] How is gluten bread a thing separate from regular bread?