Written by George Seaton, adapted from the play by Clifford Odets

Loyal readers will know I already have a 1954 Also-Ran in this series, Three Coins In The Fountain.  But unlike the usual instance where I doubled up in a given year by accident – The Love Parade and The Big House in 1931/32 is just one such year – this time I did it on purpose.  Why?  Because William Holden has been a pretty big part of this project,[1] having had his films Our Town, Born Yesterday, and Picnic already included.  Under those circumstances it seemed a shame to leave one out.  So, in a nod towards completeness we turn our attention to The Country Girl.

But more than completeness is that the 1950s were a surprisingly fertile time for Holden.  After all, while Marlon Brando might have the longest-lasting effect of the 1950s stars on the acting craft, and therefore is one of the most important actors in film history, it’s unfair to ignore Holden, who is just as important in his own right.  After all, when you happen to be in six Best Picture nominees in a decade, including 1957’s winner, The Bridge on The River Kwai, you clearly have something to learn from.

Bernie Dodd (Holden) is about to direct a Broadway show, and wants Frank Elgin (Crosby) to star.  Unfortunately, Elgin has a history of alcoholism and instability, seemingly caused by the death of his son.  On those grounds, the backers of the show resist casting him, but Dodd is determined and eventually has his way.  Part of what convinces him to take the chance on Elgin is his belief that Elgin’s problem is his wife, Georgie (Kelly), and that if she can just be sidelined, Elgin will be fine.  In the end, though, Dodd realizes Georgie isn’t the problem, but is the only one holding Elgin together, and that without her he’d likely have already been dead already from drink or just straight suicide.

The Country Girl is essentially a three-hander.  Or, more accurately, a two-hander, with one of the three hands always revolving off-screen at any given time.  And in this case, it’s usually Kelly – despite winning the Best Actress Oscar, she’s more a heavily-featured supporting player, having less screen time than either Holden or Crosby, who are clearly the stars of the film.  But, Because Kelly won the Oscar as Best Actress, she’s the right person to start with.

When one thinks about Grace Kelly, it is usually in terms of glamour.  There’s just something about her that screams glitz.  And why not?  After all, she was an impossibly0-beautiful woman, with striking blonde hair, who looked absolutely at ease in the most formal of clothes.  She was a woman who exuded class and mystery, and it was no wonder why Hitchcock put her in his films as the ur-blonde.  But unlike other Hitchcock blondes, Kelly was neither an ice-queen, nor haughty by nature.  Rather, she seemed as comfortable, and believable, playing the Quaker wife, Amy, in High Noon as she did playing haute couture.

But it’s telling that Kelly’s only Oscar win was for a role that required her to be unglamourous, almost dowdy, and not for one of her more-famous roles.  And by the time The Country Girl opens, she is the essence of unglamourous.  After all, by then Frank Elgin has been on a slide for about a decade, with him and Georgie reduced to living in a small apartment over a grocery store, surviving off the modest income Frank makes singing advertising jingles.  Where they were once living high on the hog, and Kelly shined in a white gown, now they may as well have been wearing flour sacks for clothing.  In truth, Kelly’s Oscar probably has less to do with her performance as Georgie – which is fine, but unspectacular – than it does with having played against her usual type, and against her usual vanity, with her hair darkened and circles drawn under her eyes.  Which is probably a lesson all beautiful actresses should take from the film: if you want to win an Oscar, go ugly.

William Holden, as the Broadway Director Bernie Dodd is great.  He’s loud and cynical and the role is right in his wheelhouse.  The only real problem with it is it’s the same type of thing we’ve seen out of him before, only this time the character lacks some of the nuance of his turns in Stalag 17, and Sunset Boulevard.  In those films there is some depth in the scripted character, but here Bernie Dodd is not exactly a character as much as a stereotype of a Holden character.  Still, seeing William Holden do the usual William Holden thing is kind of like seeing Nicholas Cage doing that usual Nicholas Cage thing – even when the movie around them lets them down, there’s still a magnetism to the performance. 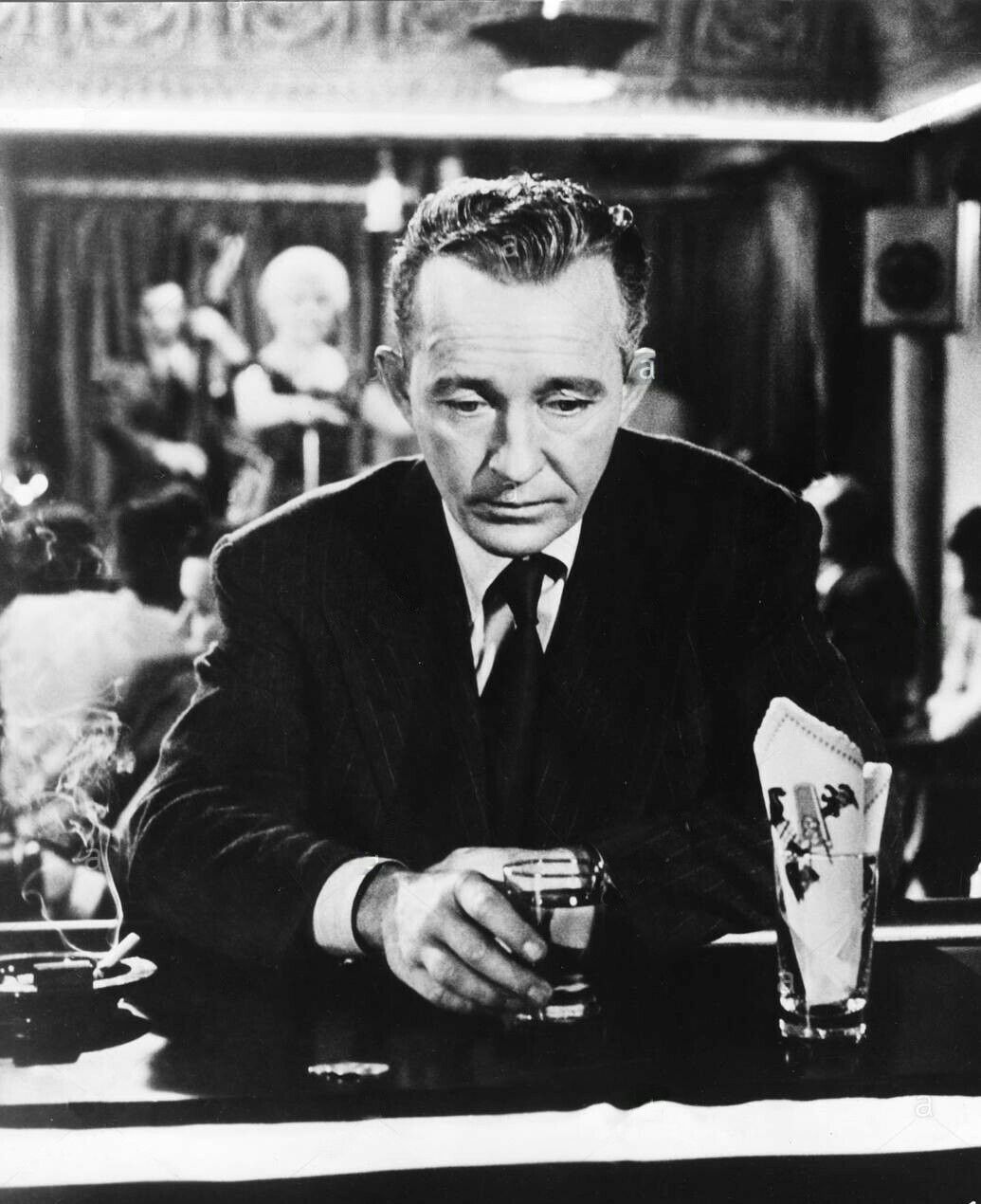 Of them all, Crosby as Frank Elgin is amazing.  Early on you think this is just going to be another of the usual Crosby performances, where he’s charming, sings a couple songs, kind of dances around a little in the usual way and just generally does Crosby doing Crosby.  And in those early scenes we find the usual Crosby performance, that’s of a piece with everything else he did around the same time.  Where things get interesting, though, is what the film does thereafter, and how it plays with Crosby’s image.  It’s there when the movie really sings.[2]

In most other films, Crosby plays a good natured guy who always manages to come out on top.  In the Road movies with Bob Hope, in White Christmas, in The Bells of St. Mary’s, he always manages to win and seems like a swell guy doing it.  He croons, wins, and does it all with a smile on his face.

Here, though, as soon as we think we’re in for that kind of a performance, the film snatches it away, making it explicit that Crosby’s Frank Elgin is no winner.  Instead, he’s a self-destructive loser barely able to keep himself from sinking straight to the bottom of a liquor bottle.  But even as it plays him as a loser we have sympathy for him – after all, he did have his only child die a tragic death.  And if that’s not reason enough to have sympathy, there is his own self-loathing and anxiety as a performer.  In other words, the film goes out of its way to set up Elgin’s alcoholism as something to be tragic and the sort of thing that would happen to any of us.  To make it sympathetic.

Except near the end Elgin reveals flat out there is little tragedy in his story, that he is nothing more than a cunning, unrepentant drunk, and that while everybody else thinks his wife is a controlling enabler, it is he who controls her while she barely holds them together.  Yes, he’s broken, but he is at the very bottom of it a pathetic loser.

The only reason the film works, or Frank Elgin works as a character, is because Crosby acts the hell out of it.  Where another actor might’ve been out of his depth, or seemed a silly caricature, Crosby is fantastic.  He gives one of the great sweaty, desperate performances that was unjustly lost to Oscar history, buried in the trivia of The Country Girl winning Grace Kelly her only Oscar.