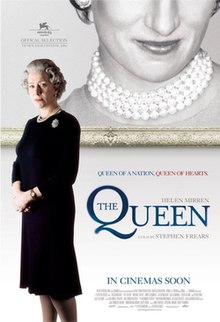 Just a few short months into Tony Blair’s tenure as England’s Prime Minister, Princess Diana, by then divorced from Prince Charles, is killed in a car crash in Paris.  Over the course of the following week the English public struggles to come to grips with the death of the “People’s Princess,” while the royal family steadfastly refuses to publicly acknowledge it.  According to the Queen, it is a private affair and should stay that way.  But as public opinion begins to curdle against the Queen, and the royals, Blair urges some broader acknowledgement to death, fearing to not do so will only fuel the growing anti-monarchist sentiment.

The Monarchy Is Bullshit

This is the second film in this series, after The Darkest Hours, involving a ceremony perhaps unique to the United Kingdom, whereby after the election of a Prime Minister, the Prime Minister to-be has to make the pilgrimage out to see the Queen to accept her invitation to form a government.  It must be the British equivalent of what American’s know of as the inauguration.  In The Darkest Hours it was Winston Churchill going out to scene King George and accept his invitation to form a government on the verge of the Dunkirk exodus, while in The Queen the scene is of Tony Blair going out to see Queen Elizabeth for the same purpose during relatively peaceful times.

Watching this scene play out in The Darkest Hours I merely thought it all so weird – why do they do this?  Must be some sort of quirk in British law, I supposed.  Seeing it play out here, again, did not make me write it off as a quirk of British law, but made me realize that monarchy, and fealty to the monarchy in any way, or the monarchal system, is absolute bullshit.  Having to be invited to form a government by a person who has no mandate from anybody was madness.  But here, it’s just another form of madness, given the constant complaints about whether one had curtsied deeply enough to the Queen,[1] and that one should not show their back to the Queen,[2] and protocol sheets and all the rest of it.   Madness.

Perhaps I’ve watched Monty Python too many times and so have taken it’s attitudes to heart, that “Supreme executive power derives from a mandate from the masses, not from some farcical aquatic ceremony.”  But I find that to be true and any movie with a monarchal system leaves me incredulous.  How these unelected idiots wound up in charge of anything, and are seen as having any power, is ridiculous and should be ended post-haste.

Moreover, the very idea of an unelected monarchy spits in the face of freedom and the benefits of it.[3]  After all, the very underpinning of a free society is that those with the talent will be the best and will reap the greatest reward.  But one cannot be king on ability alone, one can only be king if born to it.  Even when you marry into it, you’re only royalty for the length of time you are married and once you are out, you are completely out.  Which means you can save your aspirations – it you weren’t born it, you’ll never be it.

The stated theme of this movie is the clash between protocol and practicality.  Between tradition and modernity.  And being about protocol and tradition, this film is dedicated to restraint, playing out the drama in quiet voices and orderly conversations.  Disagreements are respectful and there is hardly a raised voice.  It is a strange film in this way, because while it makes the case that we must accept change, it portrays it in a very traditional way.  Stranger still is that, when somebody actually does raise a voice, it is in sort-of defense of the traditional way.

Of course, it must play this way because there are elements here that if not handled tastefully, in the traditional way, could wind up being grotesque.  Take the central event – Diana’s late-night death in Paris.  In other hands this might have been explicit to the point of callousness by actually showing the death, but here it is done at a touch of a remove.  At no point do we see the accident, nor do we hear it.  And the closest we ever get to seeing her coffin is through a glass partition, also at a remove.  We never see her body.  By approaching the scenes at a distance you would expect the emotions of them to be muted but rather, it actually emphasizes them by forcing us to focus on what the death means to those around it.  No, that does not mean there were any moments of performative grief, with the rending of clothes and wailing of tears, but was handled in such a way that even an anti-monarchist like myself could see the humanity in Prince Charles and got a little choked up by it.

Mirren is obviously the touchstone for everybody here, winner of Best Actress for her performance as the Queen.  On the whole, she is fine and since she’s generally raved about as an actress, I’ll save my breath and simply say it again: she is fine.  She does not take any great risks, but quite capably handles the delicate balancing act required to play the Queen in the week this film takes place, as a woman so far out of touch with reality that she’s circled all the way around again to thinking she’s the only judge of reality.

Michael Sheen, as Tony Blair is also fine.  But really, when is he not?  It’s not his finest hour, to be sure, and his take shades a little close to the energy he brought to his portrayal of David Frost in Frost/Nixon, but he does well.  What’s unfair about Sheen is he’s consistently good, but doesn’t really have a signature role that would put him in the same category as a Helen Mirren.  That doesn’t put him in the Oscar race.  The closest he comes to it is as Brian Clough in The Damned United, but that movie was little seen in America and received zero Oscar noms.  Given his talent, there’s reason to think he may one day get there, and I hope he does.

For me, the real standout was Alex Jennings as Prince Charles.  It’s a small role, and not showy, played as it is in glances and basically quiet asides, but it’s an important one.  If Mirren has to portray that delicate balancing act required of the Queen during the week the film takes place, Jennings has an even narrower needle to thread, given he is not yet the head of the monarchy and still has to deal with the family ties to his mother, the Queen, his children, and his deceased ex-wife.  It’s a smallish part, yes, but a crucial one and Jennings ably proves to be the only man in the royal family with any sense of rationality.

In retrospect, given how the queen’s acknowledgement of grief on TV at the end of the film is a seminal and important moment in the film, it seems in hindsight a shame this film wasn’t called The Queen’s Speech.  Given The King’s Speech was about Queen Elizabeth’s father, and given the importance of the speech in that film, it seems only fair and right to retroactively change the name of this film, a la Star Wars[4] and Edge of Tomorrow[5], so as to take advantage of the symmetry and echoes between the two films.  The Queen’s Speech and The King’s Speech.

There are a couple times in the film where we see the Queen writing in her diaries, and I was left to wonder – where do those go when she’s filled them?  Do they go into a vault or are they just binned?  I suppose I could search out the answer if I really wanted to spend time on it, but I don’t.  I’d rather just wonder and move on.

Best Picture 2006 was The Departed, the film that finally won Scorsese an Oscar.  At the time, it was the popular choice, but in revisiting it for The Best Picture Project I found it less than I remembered and surely it benefited from the Scorsese sentiment.  The reality?  It’s not only not his best, it’s not one of his five best.  Many of the performances are crap, the story is a mess, and it’s nowhere near as good as you remember.  Moreover, it fails to equal it’s source material, Infernal Affairs.

Pitting these two films against each other – The Departed and The Queen – I think I’d have to favor The Queen.  For one, it’s shorter – considerably shorter, and as I get older I have a greater appreciation for a film not trying to unnecessarily steal away the limited remaining minutes of my precious life.  Second, The Queen is not the narrative muddle The Departed is.  For another, it has a well-managed tone.

That said, 2006 was a bumper crop in film.  Little Children is quite good, The Devil Wears Prada is endlessly rewatchable – Meryl Streep is simply delicious there –Little Miss Sunshine is lovely, Children of Men has turned into an outright classic, and The Prestige is the secret-star of Christopher Nolan’s filmography.  That all said, if I’m truly honest, the actual best picture 2006 is a German film that surprised everybody and won the Best Foreign Language Film Oscar everybody assumed would be going to Pan’s Labyrinth: The Lives of Others.  Even though I’ve watched the movie a handful of times it still seems completely new every time I come to it.  It’s tense, well-directed and its themes of the struggle for artistic repression and free speech behind the iron curtain are evergreen.

[4] Now known as Star Was Episode IV: A New Hope

[5] It wasn’t exactly changed, but the studio did try to recast the film as being called Live, Die, Repeat.