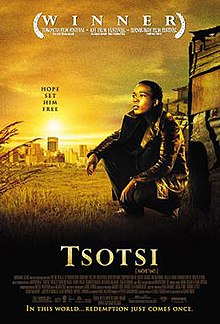 Screenplay by Gavin Hood, from the novel by Athol Fugard

Best Picture 2005 was the not-terrible, but thoroughly maligned-by-comparison treatise on racism, Crash.  Like you, I was horrified it won Best Picture over the far-more-deserving Brokeback Mountain, and like you I shook my fist at the heavens to protest this injustice.  But unlike you – or, probably unlike you – I’ve since backtracked slightly.  No, I do not think Crash is worth of Best Picture, but at least now I see that it’s not all that terrible.  Yes, it’s manipulative and pat, but the actors are trying their hardest to sell it and there are some truly amazing performances – Don Cheadle and Terrence Howard especially.  Plus, it is well-directed and visually interesting.

The other nominees[1] in 2005 were Capote, which I saw in theaters; Munich, which I also saw in theaters; Good Night, and Good Luck, which I saw on DVD.  Because I’d seen all five of the Best Picture nominees, and all five Best Director nominees – in a rare bit of synergy, the two categories perfectly aligned – I decided another trip through the Foreign Language films were in order.  There we find: Tsotsi (South Africa), directed by Gavin Hood;[2] The Beast In The Heart (Italy), directed by Cristina Comencini; Joyeuz Noel (France), directed by Christian Carion; Paradise Now (Palestine), directed by Hany Abu-Assad; and Sophie Scholl – The Final Days (Germany), directed by Marc Rothemund.  Because Tsotsi was the winner, it was infinitely easier to get my hands on, and so here we are.

One night a young wannabe-gangster, Tsotsi (Presley Chweneyahae) steals a car from a woman and in the process accidentally kidnaps her baby, who was locked into his car seat in the backseat.  Instead of abandoning the baby when he abandons the car, he takes the baby back to his shack in the Johannesburg ghetto, where he spends a couple days giving it some haphazard care as he nurses the idea of keeping and raising the child.  When he’s finally convinced he’s not really able to care for the child, he returns it to its parents and is arrested for various crimes.

It’s no shock to say Crash is hardly Best Picture worthy – I absolutely prefer Brokeback Mountain and feel it got screwed.  Pun intended.  Under these circumstances, then, the door is open to find Tsotsi better than Crash.  At least, it wouldn’t be a shock.

So was it better?

In a word, no.  But then, in another word, yes.  If we’re honest, both Crash and Tsotsi are about as good as one another and your preference between them probably rests on what flavor you take your social messages: do you prefer racism in America, or economic class and crime in South Africa?  If one of the two is better than the other at making a social statement it’s Tsotsi, because it does not assault you with a jury-rigged message.  It does not seem bullshit.  Yes, it’s intent is foregrounded, but it’s not FOREgrounded.  Crash, on the other hand…?

In terms of technique, Crash is the more accomplished film.  It’s better made.  Tsotsi, aside from feeling by-the-numbers, has a certain cheapness and artlessness to it, especially in terms of the cinematography and framing.  In a lot of ways, it feels like watching a well-made TV movie.

Moreover, so much of Tsotsi is just inscrutable, particularly Tstosi’s actions in keeping the baby.  It’s such a random thing for him to do – why does he take it?  He hasn’t expressed a desire for a baby before, and yet he takes one.  There’s no sense in it and there’s not a lot we can discern from the movie why he does it.  Nor does he hint at any sort of viable explanation.  He only seems to do it because the plot needs it done.

That said, there was an emotional truth and honesty to Tsotsi that just seems absent in Crash.  When it deals with issues of loyalty and brotherhood, it hints at something far deeper than the predictable, one-note racism of Crash.  It might not be as well-executed technically, but at least it feels real.

And to be fair, Tsotsi does have one terrifying scene.  In it, four hoodlums, including Tsotsi, follow a vendor onto a commuter train, intent on robbing him in the middle of a crowd, only to wind up killing him.  It is a rather quiet and intense scene, and disturbing for how easily it escalates from robbery to murder.  But what really gave the scene heft was the reactions from the four to it, particularly the one who has to stop and vomit afterwards, horrified by what they’ve done, explaining it as he still has “Decency.”  That just because he was part of it did not mean he was unaffected by it.

[1] Besides Crash and Brokeback Mountain