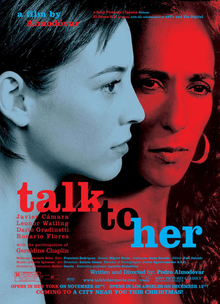 Pedro Almodovar had a moment.  A relatively short period in time where he became something of the toast of the Academy.  Sure, he’s otherwise had a long career, directing something like 22 features over 30 years and helping to launch Penelope Cruz and Antonio Banderas, but while hew was critically acclaimed, that didn’t really translate to much success in America in the same way other foreign language directors had.[1]  He was known, but he wasn’t known.

But then came the one-two punch of All About My Mother[2] and Talk To Her, and something happened.  His films were suddenly anticipated in America, or at least anticipated more than they were before.

My theory on why the breakout happened?  Maturity.

I don’t mean maturity in that he grew up and stopped doing dumb, juvenile things – that’s what happened why I matured.  Or that he decided to make the Spanish-language version of Schindler’s List.  No, I mean matured in that he was in full control of his craft in a way he hadn’t been before.  Which is an unusual thing – recognizing a filmmaker for maturing as an artist.  These days we seem to want filmmakers to burst onto the scene fully-formed, because everybody loves a wunderkind.  Which means that a director who started off well and honed his or her craft over several films is seemingly disfavored.

And if the ‘honed their craft’ type of filmmaker is recognized, it comes with some willful ignorance of a lesser-known first film, because it intrudes on the idea of the delivered genius.  Nobody likes to think these guys could ever make a film when they were not in total control of their art.  Damien Chazelle made a splash with Whiplash and La La Land back-to-back, ignoring he actually directed a film before that – Guy and Madeline on a Park Bench.  Paul Thomas Anderson is lauded for everything from Boogie Nights to his most recent film, Phantom Thread, as if he’s always had greatness in him, leaving his first film Sydney[3] hardly mentioned at all, owing to it being a rougher effort, imperfect in it’s execution.  Same for Wes Anderson, whose quirks can be traced from film-to-film and debated over endlessly, even as his maiden voyage, Bottle Rocket, is frequently forgotten.  And then there is Quentin Tarantino and his aborted 1987 film, My Best Friend’s Birthday.  In a way, the story of these filmmakers is the story of the biopic in Hollywood – everything needs to fit a prescribed narrative structure and when it doesn’t, the uncooperative bits are discarded.

This all brings me back to this point: the great directors aren’t born, they are made.  Yes, they all start with talent and sometimes lightening will strike and greatness happens right out of the gate.  More likely, though, is that just as it takes time to properly learn to ride a bike, it takes time to learn to properly make a film.

Of course, this theory could also be total bullshit and it’s just as likely Almodovar was great from the beginning and it was the world that finally caught up to him.  But I think my ideas sound truer.

Following the death of his mother, Begnino (Javier Camara) becomes the caregiver for a young dance student who’s been left in a coma as the result of a car accident.  But the dancer is by no means a stranger to Begnino – her dance classes are held across the street from the apartment he shared with his mother and over time he formed a bit of an obsession with her.

While caring for the dancer in the hospital, Begnino meets Marco (Dario Grandinetti), the boyfriend of a comatose matador.  They strike up an unlikely friendship as the film probes notions of obsession, art, friendship and love.

Normally I tend toward restraint in this series, trying to be as objective as possible.  That means I usually make an effort at finding things to both love and hate in the films – I think it makes for better criticism.  Besides, with most movies being imperfect, finding the good and the bad is just another way of acknowledging that fact.

At heart, Talk to Her is a melodrama, but melodrama of the highest order.  Yes, it has soapy elements in that it plays with wilder storylines than a typical film – coma, obsession, mystery pregnancies, bull fights – but it deploys those elements with the utmost care.  It does not use wild closeups or zooming cameras, or overwrought music, and the acting is almost restrained.  Moreover, the various threads of the plot are not treated as shocking, or far-fetched, but as the normal everyday life of these people.  Better, it treats everything honestly and fairly.  Watching the movie you do not feel as if anything is forced, or unearned, but was completely logical.

That said, the film is rather interesting in how it uses time.  In one sense, the film is linear, stepping forward again and again, over great periods of time.  At the same time, it liberally uses flashback and eventually seems to loop around on itself in an incredibly satisfying way.  It’s a delightful use of the form.

My favorite part was the use of the film within the film.  You see, Begnino believes talking to coma patients is good for them, a notion borne out later when his coma patient eventually awakens, while the other coma patient, who is seemingly not given the same level of care or talking to, dies.  Anyway, one of the things Begnino talks to her about is a movie he saw, an old silent film about a shrinking man.  In the movie, the climax – literally and figuratively – comes when the shrunken man climbs inside the vagina of his lover while she sleeps, never to reemerge.  And by climb in her vagina I don’t mean he does it figuratively, or offscreen – I mean he climbs into a very large female vagina.[5]    I loved this sequence not because of the sex involved, but because Almodovar treats the story without judgment or salaciousness.  It’s almost offhand how natural it all plays.  Which is not something you will ever see in Hollywood movies – at least not the Hollywood that forced the insertion of digital characters into Kubrick’s Eyes Wide Shut to tone down the sex.

To be sure, I’m no Almodovar connoisseur and have only ever seen one other of his films – Bad Education.  While I that one was daring, it didn’t stick with me.  It did not say to me I needed to see other Almodovar films.  All it said to me was he’s just another filmmaker I don’t quite get.

Talk to Her, on the other hand, was completely engrossing, to the point I took fairly shoddy notes for the film.  Which is what happens when you’re that far into a film – you can’t be bothered to write down your thoughts on it.  After this, it’s easy to see why Almodovar had a moment. 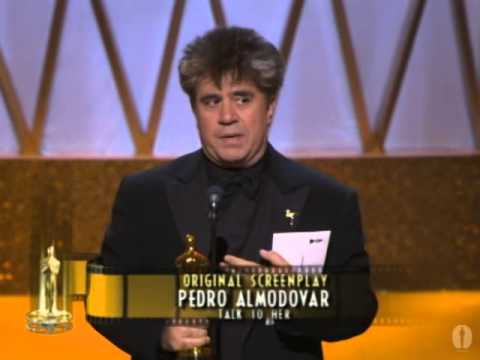 The answer there lies in the Academy rules.  See, screenplays and directors are nominated by members of their particularly branches of the Academy, and any film meeting the general eligibility requirements may be nominated in these categories – it’s basically gotta play in a theater in LA for a week before it’s released on video, TV, or streaming.  This generally is how Talk to Her was nominated for Screenplay and Director – it met the time and place requirements of exhibition.

However, eligibility for Best Foreign Language Film is a different thing.  There is no requirement it be released in the United States to be eligible; rather, it needs to be exhibited in it’s country for seven consecutive days during a different period of time than the regular Oscars.  More importantly, though, it needs to be submitted by a foreign country as a film from that country.[6]  And, as you can expect, there is but one submission per year, per country.[7]  Meaning, for Talk to Her to get Foreign Language Oscar love it would need the film board (or whoever) of Spain to submit it.  Except—

Except they didn’t.  Instead, they submitted Monday’s In The Sun, a film about the effects of unemployment on a group of men after the closure of a shipyard, directed by Fernando Leon de Aranoa, and starring Javier Bardem.   Despite that film having won Best Picture, Director, and Actor at the Goya Awards,[8] and being nominated for a handful of European Film Award, it failed to secure an Oscar nomination, which is hindsight seems like a total waste of a submission.

Occasionally this sort of thing happens, where a popular foreign film in the US is not submitted to the Oscars, occasionally for political reasons, prompting calls for reform of the rules.  Specifically, to allow the Academy to nominate whatever foreign language films it wants, without any reference to a country submitting it.[9]  But, because most people in this country couldn’t care less about foreign films, even amongst the Academy, the calls for reform are usually somewhat muted and in the end, nothing happens.  Which is why eventually this will occur again.  And again.  And again.

[1] Notwithstanding a Best Foreign Language film nomination for 1988’s Women on the Verge of a Nervous Breakdown.

[4] Apparently not that rare, as I did the same thing to Hugo just one entry ago, only that time I did it to negative effect.

[6] This cost K yzysztof Kieslowski’s Blue and Red nominations, both of which were deemed not enough of the country that submitted them.

[7] Other, less important restrictions to us also apply.

[9] If this happened, you could see American films made in foreign languages rating nominations.