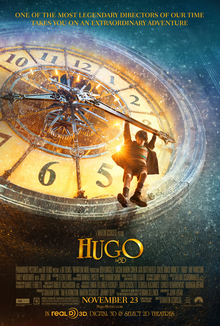 Screenplay by John Logan, from the graphic novel by Brian Selznick

It’s the rare person who does not mellow with age, but gets wilder with each passing year.  Or, at the very least, does not lose ground.  Mostly you see those people in the arts, because in the regular world there isn’t much call for a 60-year-old who still likes to party like he’s 18.

Try as we might to avoid it, going soft seems coded in our DNA, but I don’t think this is something to fear.  After all, leave a jagged rock on a beach long enough and the water will eventually wear off the rough edges into a thing of smooth beauty.  It’s happened to me, it’s happened to you, it’s even happened to Martin Scorsese.

Here’s a thing: make a movie about a sociopathic, er, avenging cab driver when you’re 30, and everybody hails you as a visionary.  Do it when your 75 and you might hear grumblings about being out of touch.  Think of it this way – as a 25-year-old you have license to sleep with all the other 25 year-olds you can.  At 25, it’s never unseemly.  But at 75, sleeping with even one 25 year-old is a bit gross.

When I was younger I was a smoker, refused to exercise, and ate anything I wanted – the greasier the French fries, the better.  And when I was able to get my hands on alcohol, I drank it all.  But that was when I was 18 or 19.  No wonder that I eventually ballooned to 255 pounds.

This is not to say I’ve completely changed.  I’m still a bit enamored with the sound of my own voice, I still think the things I have to say are more worthwhile than the things you have to say, and I still have a terrible habit of thinking of myself first, middle, and last.  But while these things haven’t changed, I’ve adapted my life to kind of work around them, so as to make my personal peccadilloes palatable to the general public.  It’s partly why I’m a lawyer, because that line of work gives me a good outlet for my bloviations.  Better, I get paid for it.

That all said, you don’t just have to accept this sort of slide into lameness.  At least, you don’t have to lean into it.  Kubrick didn’t accept it, making his most emotionally provocative movie, Eyes Wide Shut, just before his death at 70.  It might not have had the blunt edge of A Clockwork Orange, but it was just as devastating.  And in terms of his formal style, he continued to hone his craft up to the end, pushing at the boundaries of what he’d previously done.

Similarly, I’ve found ways to push my own boundaries.  A few years ago the idea of running a half-marathon was bonkers, but now I run them with ease.  Which means I’ve turned my attentions to trying to conquer full marathons, and when I succeed at that challenge, I might go for longer distances.  Why do this?    Because the constant testing of oneself in healthy ways is how you truly prove you’re alive.  Also, it’s proof that I’m not giving in quietly to growing older.

But while Kubrick and I tried, or are trying, our hardest to keep redefining the limits of who were are and what we do, I get the sense that Martin Scorsese has been flirting with giving in.  Sure, it’s hard to match the intensity of the films he made between 1973 and 1990, because those were some high times and trying to replicate that might be impossible.  But lately it seems he’s hardly trying.

If we’re honest, the last truly good movie Scorsese made was The Aviator.  Sure, he won an Oscar for The Departed, but that seemed more a career achievement Oscar than for that particular film, which was honestly not great.  It was good, but not great.  And while The Wolf of Wall Street nodded towards being completely gonzo, it lacked the tautness of his earlier films – that movie was a story of excess in every way, including running time.  And while I have my own affinity for The Aviator, I’m probably not wrong in believing many of you think that movie is not all that good.[3]  Perhaps Gangs of New York will get love from some of you, but if you’re honest with yourselves, the only good parts of it have Daniel Day-Lewis in them, and there really isn’t enough of him in the film at all to justify it.  Besides, Cameron Diaz is downright terrible, as is that dreadful song by U2 they insist on playing.

Don’t get me wrong, Scorsese movies were not exactly terrible in the interim – Silence was particularly underrated.  It’s just they pale in comparison to his earlier work – as underrated as Silence is, nobody believes it was in the Scorsese top-5.

Which brings me all the way around to Hugo.

Hugo is the story of a young orphan, named Hugo, left with a half-restored automaton after the death of his father.  After completing the restoration on his own, the automaton draws a scene from the Georges Melies’ film, A Trip To The Moon, which Hugo believes must be some sort of message left to him by his dead father.  Unbeknownst to the boy, the director of A Trip to the Moon, Georges Melies, has been living in obscurity anonymity right under his nose, reduced to running a toy shop in a train station and trying to forget the filmmaker he once was.  Only, when Hugo learns the man is still alive, he goes to him for answers.

Though it was nominated for 11 Oscars, and won 5 in the technical categories, Hugo is not a good film.  Rather, Hugo is a soulless movie that traffics in nostalgia and wistful earnestness, and really feels empty at it’s core.  In many ways, it feels like the kind of nostalgia-piece you’d expect from late-career Steven Spielberg, not Martin Scorsese.

This is fact: there is nothing in Hugo that says to you this is a Scorsese film.  He does not film it with the same verve he did with even something so trashy as The Wolf of Wall Street.  He does not give it that vitality.  If you were to come into this film blind and had to figure out from the subject and style of it who directed it, you’d never say Scorsese.  Fact is, Hugo has no sense of his fingerprints or sensibilities on it at all.  There is nothing auteurist about it.

Rather, it is generic and competent.

Aside from failing to really put his stamp on the film, Scorsese goes maddeningly wrong with the use of CG.  Where Spielberg would have used it as a tool,[4] Scorsese falls face-first into it, allowing the visual effects artist to indulge their worst impulses.[5]  So rather than allowing Hugo to feel as tactile and visceral and revelatory in the use of movie magic as in his early films, instead it feels airless and without stakes.  It was both dispiriting and disappointing.

And this is ultimately why people lose their edge: they are cursed by their success.  When you are starving you innovate because you have no other choice, and create a thing of beauty from your limitations.  When you have money, you indulge to the point of gluttony, and create something gross.

That all said, there was one part of the film that perked me up.  This is late on, when Scorsese flashbacks to a montage of the early days of French cinema, circled around Georges Melies and his movies.  In this sequence we see several pieces of various Melies films recreated, not just A Trip To The Moon, and see that primitive effects and primitive sets were actually a boon to Melies, because they forced him to innovate with what he had.  It showed how creative one had to be to achieve anything in the face of their limitations.  The truth is, this montage was the only part of the film that felt personal and cared for.  The only part that was alive.  It was during this sequence when you finally see what it was that probably interested Scorsese in this project – the early history of French cinema.  No surprise, this montage has more life than the rest of the film combined.

Where the rest of the movie felt ho-hum, this montage felt like love.

The irony is that as a younger man Scorsese had to scrap and struggle to get any film made and so only made films he loved.  Now as an older man he can make pretty much any movie he wants, and so makes everything.  Good, bad, indifferent – he makes it.  One only wishes that those scenarios were reversed because instead of looking back at Scorsese’s career wistfully and marveling at the work he did, we’d be looking ahead at the gems he’d have to scrap to make.  At the very least, you’d see him make movies again because he loved them, not because he could.

[3] As much as I enjoy The Aviator, and thought it was maybe the Best Picture of 2004, even it lacks the usual flair and immediacy of a Scorsese film.

[4] Do not misread me: I am not in the bag for Spielberg, either.

[5] I don’t care that this film won an Oscar for visual effects – they are overdone and look fake.