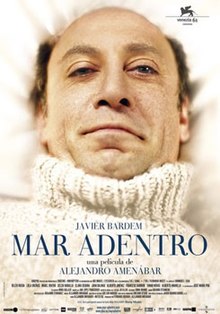 You probably read the title of this week’s Also-Rans entry and asked yourself, “Why a Foreign Language Film winner and not an actual loser from one of the top races?”  Answer: Because of all the films in the top races[1] the lone nominee I’ve not seen was Vera Drake, [2]  a Mike Leigh Film,[3] and I was not motivated to fill in that one blind spot because I find Mike Leigh’s films boring and don’t need to sit through another to come to the same conclusion.[4]

So, rather than choose a film based on it’s sound editing nominations, or that sort of thing,[5]  it seemed better to highlight a film that otherwise might be ignored in this country simply because it’s in a foreign language, or is a documentary.  This left me to choose between the Best Documentary winner, Born into Brothels: Calcutta’s Red Light Kids, which might be a lovely and amazing documentary, but has a title that makes it sound grim.[6]  And Foreign Language Film winner The Sea Inside, a movie about the fight for assisted suicide in Spain.[7]

Shocking as it may seem, but the assisted suicide movie sounded like the easier sit than a movie that promised to be about children and brothels in India.  It promised to be less grim and so let’s do it: The Sea Inside. 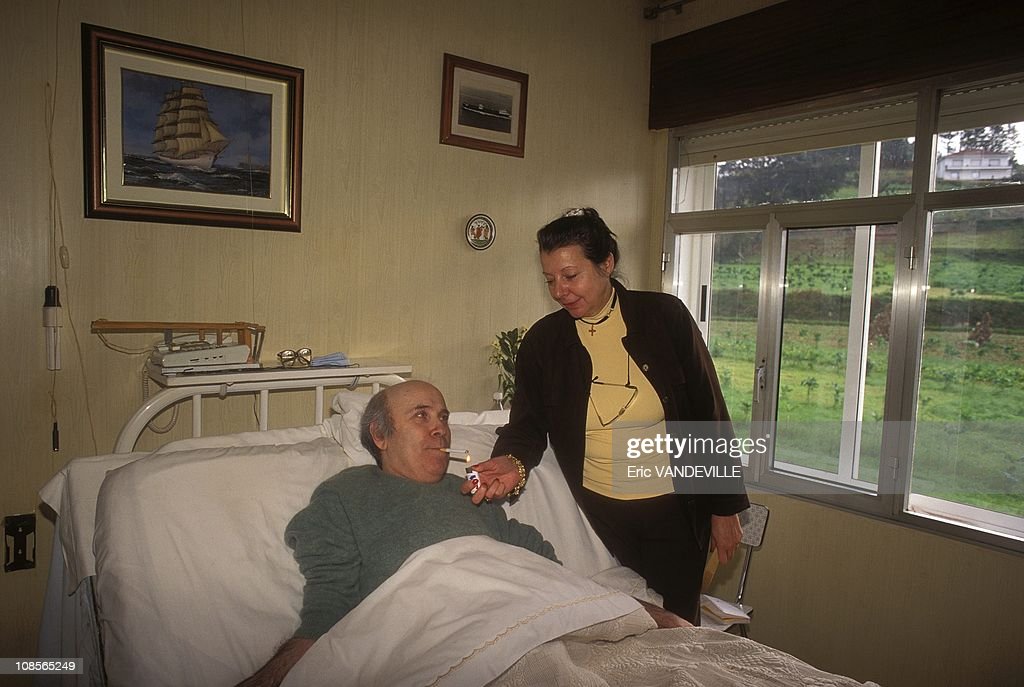 Ramon Sampedro (Javier Bardem) was rendered a quadriplegic in a swimming accident, when he took a deep dive into shallow water and broke his neck.  For the next 28 or so years, he is cared for by his brother and sister-in-law.  Over the course of that time, though, he advocates for the right to legally end his own life through assisted suicide.  Helping him is Julia (Belen Rueda), a lawyer who suffers from a disorder that will essentially bring on early dementia and render her physically dependent on others.  At the same time, he meets the acquaintance of a young mother, Rosa (Lola Duenas), who strikes up a friendship with him and eventually agrees to assist him in the suicide when the time comes.

Surprisingly, for a movie about assisted suicide, where the specter of death is inescapable, The Sea Inside is not at all as bleak as it promised to be – it was hardly bleak at all.

Indeed, while the film is clear from the start that it will make Sampedro’s death the strangely triumphant finale of the film – if it wasn’t going to be his death, then what’s the point of the film? – it does not merely let him go through the film as an inert symbol living out the endgame of his life.  Rather, it shows that even as he desires death he is still mentally vital, and has dignity.  More, it shows his desire for death is both logical and freeing – freeing to him, more than anybody.

But because the film allows Sampedro his dignity, there is a danger of it all becoming didactic and preachy.  A piece of political tripe.  Mercifully, though, Amenabar is careful to maintain the film as a film first, stressing the cinematic elements, meaning The Sea Inside is an Oscar not because of it’s subject, but because of its film.

As Sampedro, Javier Bardem is great.  Unlike his other roles, where he is allowed to act with his whole body, here he is the anti of physicality.  Because Sampedro’s body is merely a husk, Bardem must convey the character through little more than his voice and face.  Given the limited tools he can use, the role is a massive challenge and Bardem shows his skill as an actor by giving us the true internal sense of the character through just the use of his eyes.  Moreover, he makes it look easy.

Better, where another actor of filmmaker would be tempted to play up the sadness and tragedy of Sampedro, neither Amenabar, nor Bardem, is here for that.  Rather, they as careful to emphasize humor in the film.  It isn’t thick, and the film is not a comedy, but neither is the humor shied away from.  And that is something otherwise different in this film, is it understands

even in a tragic life there is still humor.  In this case it is a gallows humor, but it’s still humor:

In all, The Sea Inside is a legitimately good movie, easily earning it’s Oscar for Best Foreign Language Film. 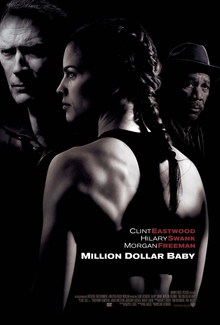 The Sea Inside was not nominated in any of the top-line races at the 2004 Oscars.  Occasionally you’ll see the likely Foreign Language Film winner get a secondary nomination in at least one of the screenplay categories.  Or, if you’re Pedro Almodovar, as Best Director.  The Sea Inside did rate a second nomination, but that was for Best Makeup, which it lost to Lemony Snicket’s A Series of Unfortunate Events.[9]  To be fair, like most other secondary nominations for Foreign Language Films, the chances of a win for Best Makeup were slim, not simply because this was a foreign language film, but also because the only makeup work in the film seemed to be in turning Bardem’s lush head of hair into male pattern baldness.  Hardly what I’d consider Oscar-worthy.

You see, if you’ve followed The Best Picture Project, the sister project to this series, then you know Best Picture 2004 was Million Dollar Baby, a movie I do not merely hate – it’s a movie I actively loathe.  When other folks point to Crash or The Greatest Show on Earth as being the worst films to ever win Best Picture, I point a finger straight at Million Dollar Baby.  After all, Million Dollar Baby is a steaming pile of horse-shit.  And everything it wishes it could say and be, is exactly what we get in The Sea Inside.  Only there we get it better.

See, for much of it’s run-time Million Dollar Baby is the story of a scrappy boxer who works hard and makes things happen, only to have those things ripped away from her all at once by a freak accident.  At that point the movie pivots from being an above-average Rocky retread to a movie about the right to die.  Basically, once the main character of Million Dollar Baby cracks her head on the stool and is paralyzed it stops being Rocky and starts being the worst possible version of The Sea Inside.  It become turgid, manipulative and pretty offensive.

But worse than being a bad example of The Sea Inside, Million Dollar Baby should never have gotten there in the first place – it should have stayed the Rocky movie.  That’s what it was meant to be!  And that it doesn’t follow that thread and insists on being something else entirely, to make some sort of larger point about something that it should not be doing in the first place, is an insult to everything that came before it.

The Sea Inside, on the other hand, does not play any bait-and-switch – it is what it promised to be.  Better, it does not manipulate the audience to get a response, it gets that response honestly.   It shows us the logic behind the choice to die, and also the choice of life others might make in the same situation.  It shows us how truth for one may not be truth for another.  And then, it lets you decide if his death is a triumph or tragedy.  In the end, it does what Million Dollar Baby tried to do, and does it better.  Does it with more sensitivity, vitality, and class that Million Dollar Baby could ever have.

[2] The other nominated films in those categories were: Million Dollar Baby, The Aviator, Finding Neverland, Ray, Sideways, Hotel Rwanda, Being Julia, Maria Full of Grace, Eternal Sunshine of the Spotless Mind, Collateral, Closer, Kinsey, The Incredibles, Before Sunset, and The Motorcycle Diaries.

[4] To be fair, I’ve only seen Mr. Turner, which was lovely to look at, but slow as paint drying, and part of Secret & Lies, which I could not get into no matter how hard I tried.  If there’s something out there in the Mike Leigh oeuvre that has a little energy to it, maybe you could let me know.

[8] It’s funny because his neck is already broken.

[9] Which, like Suicide Squad, is now an Oscar winner.