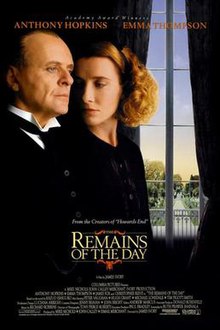 Screenplay by Ruth Prawar Jhabvala, from the novel by Kazuo Ishiguro

Let’s be honest: Anthony Hopkins is only ever going to be defined by one thing.  No matter what else he does in life – or did – he’s only ever going to be Hannibal Lecter first, and everything else second.  What is a bit curious here is while he might have made his take on the character, he was not the first actor to play the part.[1]  It was Brian Cox who had first crack at it, in Michael Mann’s Manhunter, and while Cox was charming, he lacked the specific menace Hopkins brought to the role.  Which is why one man’s take on it is iconic (Hopkins), while the other’s is merely mentioned in passing as a thing that happened (Cox).[2]

Iconic or not, the role should have never defined Hopkins.  After all, Hannibal Lecter and The Silence of the Lambs were not exactly a star-vehicle for Hopkins, because the part is definitely supporting, and the character only appears in a handful of scenes.  All told, he was onscreen for less-than 20 minutes, and the other characters probably spent more time talking about him than we got to see him.  And yet, the combination of those two things was enough to win him an Oscar and to find Lecter spun out into various sequels and remakes, with ever-diminishing returns.  Yes, Hopkins made money from all this, but it wasn’t exactly great art.

In this way, then, Hopkins is a bit of a one-hit wonder, with his greatest success – financially – achieved by playing the same part over and over again.  Yes, it’s a living, but in the end it overshadows everything else in his long and varied career, which dates all the way back to The Lion In Winter, where he played opposite Katharine Hepburn and Peter O’Toole.  Since then he’s played in everything from thrillers (Magic), epics of the sea (The Bounty), David Lynch movies (The Elephant Man), silly auterist-crap (Bram Stoker’s Dracula),[3] and the last decent film Oliver Stone might ever make (Nixon).  Yes, he might be in most things just for the money these days, but let’s not forget this is a man who was nominated for four Oscars in the 1990’s, which is more than Meryl Streep over the same stretch:

Set against the backdrop of pre-World War II English politics, the Nazi’s and appeasement of the Germans, the butler of an English manor house (Hopkins) hires a headstrong housekeeper (Thompson).  At first, they clash over the limits of their own powers, and their roles in house.  Well, because opposites attract, they come to fall in love, even as they are too proper to put a voice to it, or do anything about it.

The Good and the Bad

Coming into the film I expected it to be just another piece of stuffy Oscar-bait: a little on the boring side and mostly-forgettable.  In other words, the exact sort of movie the poster and DVD art promised it would be.  It also didn’t help I knew this was a Merchant/Ivory production, who never met some seemingly-stiff, British period-piece they wouldn’t sink their teeth into.  But as it happens, the film is not forgettable, and is so much better than what appearances promised.

The Remains of the Day is essentially a love story amongst two people working in a repressed class.  Not people repressed by society, but by their professional stations and their adherence to their career.  It has all the hallmarks of a proper love story – the pair meet, initially dislike one another, then come to appreciate one another’s quirks, and eventually segue to furtive glances and hungry eyes.  If this were in any other setting, there is a point in the movie where you expect them to fall into one another’s arms and just fuck already.  Except—

Except, this isn’t that sort of story.

No, this story is all about reservation.  About order.  About propriety.  This is not about raised voices and heavy-breathing and expressed-passion.  Rather, this is a story where every emotion is downplayed or outright avoided.  Which means they never fuck.  They never kiss.  They never even hold hands.

And yet, though the film is a masterclass of duty and restraint, it also crackles with energy, carried along by the chemistry between Hopkins and Thompson.  But honestly, who wouldn’t have chemistry with Thompson when she’s this delightful, this beautiful, this charming, this smart, this diffident – she’d have chemistry with a corpse.

That all said, the movie is a little on the long side.  At a shade of two hours, it’s just got a bit too many extraneous bits it should clear out, which hold it back from perfection.

And, I hate to say it, but after two hours of such graceful subtlety – this film refuses to reveal anything directly and obviously – it falters at the end by making an obvious metaphor out of a dove becoming momentarily trapped in the house and freed.    The metaphor is painful – the trapped bird flying free is the butler! – that landed like a thud after the precision coming before.  To be fair, this doesn’t ruin the movie at all, but the movie certainly could have done without it.

Let Us All Be Jealous of The Ruling Class

One of my favorite scenes in the film has the Lord of the house realizing it’s his job to teach his godson about the bird’s and the bees.  About sex.  Well, he’s uncomfortable with having to do this, as all proper English gentlemen should be, so gives the butler (Hopkins) some song and dance about being too busy for it, and so puts the butler to the job.  This seems ridiculous enough on its face that he’d ask his butler to do, but is only made more ridiculous when we realize the godson is a full-grown adult (played by Hugh Grant, no less) and does not need the sex talk.  Still, the butler is ever-determined to do his duty and so does the best he can under the circumstances, making for a delightful scene of the one man struggling to work out exactly how to explain it all without coming right out and being crass, while the other is pretty clueless about what’s happening.

But more than delighting me on a cinematic level, it made me realize how wonderful it must be to have servants – especially the proper Butler and Lady’s Maid kind.  After all, you have somebody there to pick up after you and make dinner, which is pretty great on its own.  Better, if there is literally anything else you don’t want to do, you can just make the butler do it, and the butler gets it done.

My plan, then, is to get rich enough to have some servants, at which point I’ll make him do something unpleasant that I don’t want to do.  After that, I’ll report back to you on whether that’s an awesome thing to have or just some nonsense I want to be true.

The Remains of the Day was nominated for Best Picture in 1993, but there was no way it was ever going to win, not when Steven Spielberg’s epic, Schindler’s List, was in the race.  Not just a good film, Schindler’s List is also an important film – perhaps the most important film of the last 50 years.  Under those circumstances, there’s no way a film like The Remains of the Day would win Best Picture, no matter how good it is.

That all said, The Remains of the Day is pretty great – if a little overlong – and definitely deserves another look from folks who might’ve seen the poster and dismissed it as a boring piece of Oscar-bait trash.

[1] If we’re honest, the same thing has happened to Heath Ledger.  He took over the part of The Joker for The Dark Knight and will forever be defined by what he did with it.  In fairness, since Ledger died, he doesn’t exactly have many opportunities to do anything to make us forget it.

[2] Don’t misunderstand, I think Brian Cox is a fine actor, he just didn’t do much different as Hannibal Lecter from what he later did in other roles, such as Melvin Belli in Zodiac.

[3] Sorry to be a hater on this one, but Bram Stokers Dracula is kind of boring and most of the performances are ridiculous.

[4] It’s a stirring moment, in the most repressed way possible.