Screenplay by Robert Rossen and Sidney Carroll, based upon the novel of the same name by Walter Tevis

There’s a pretty phenomenal performance in The Hustler and it’s probably not the one you’re thinking of.  In the grand story of movie history – or at least the history of film I created in my own head – it’s assumed the Academy shafted Paul Newman out of his rightful Oscar in 1961 by giving it to Maximillian Schell for what is essentially a supporting performance in Judgment at Nuremberg.  This is not to say Schell was not Oscar-worthy, because I recall him being very good in an otherwise painfully-earnest film, it’s just he was not the Leading Actor in that film.  That was actually Spencer Tracy, followed by Burt Lancaster and Richard Widmark.

So powerful is the notion that Newman lost the Oscar he was supposed to win is that when Newman revisited the role in The Color of Money in 1986, to diminishing results, they made damn sure to give him the Oscar that time.  Which inadvertently screwed Bob Hoskins out of the Oscar he’d never receive for Mona Lisa, and never had the chance at again.[1]

But while history may remember Newman for his performance, the truly phenomenal performance in the film is given by Jackie Gleason as the wily, calculating pool player, who operates as Newman’s onscreen nemesis, Minnesota Fats. 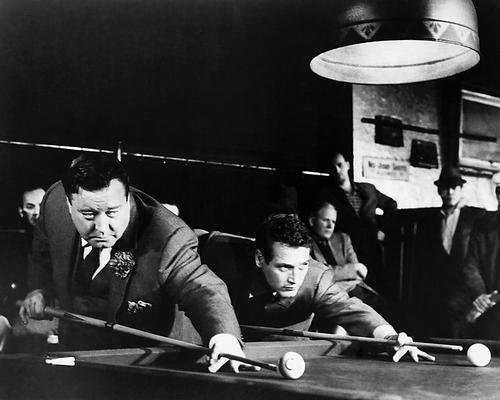 What makes Gleason’s performance phenomenal is not that he does any capital-A Acting, as the bulk of his co-stars do, but does a performance entirely with small-a acting.  As Fast Eddie, Newman is all brooding charm and uncertain bravado and it’s easy to see why women are attracted to him, even as he’s self-destructive.  As Bert Gordon, Scott is handsome and charms as well and it’s easy to see why, even as there is a bit of a danger to him, he’s still capable of drawing Newman to his orbit.  And as the alcoholic Sarah, Laurie gives you enough to see why Newman would take up with a woman who’s best avoided.  In our own way, those three go big and got some Academy recognition for it.

On the other hand, Gleason is the very definition of restraint, and by doing little, he does so much.  While Newman and Scott seem to be working their asses off at being cool, or tortured, and at playing their characters, Gleason just oozes his.  In every step, in every gesture, in every look, you believe he is who he is playing.  He is a man who does not lack for self-confidence or belief.  He can do nothing, and so does everything.

Here is what people – the Academy included – often forget: acting is just about the things you don’t do as it is about the things you do.  Too often we can only see acting as being good when we can see the acting, and forget that it’s the acting we can’t see that may be best.  And this is the heart of Gleason’s characterization.  He strips away all the mannerisms and bullshit and just exists.

To be fair, Gleason’s performance wasn’t overlooked – he was nominated for Best Supporting Actor, losing to George Chakiris in West Side Story.  No disrespect to Chakiris, but in hindsight his performance in West Side Story is merely serviceable – most of them in that movie are– and not the kind of thing you give Oscars for.

But even if Chakiris wasn’t in the race, it’s likely Gleason doesn’t win.  For one, he has to contend with his co-star, George C. Scott, being in there with him.  For another, he has to deal with Montgomery Clift being in there for Judgment at Nuremberg.  In both of those instances, Scott and Clift, are doing the type of acting the Oscars like, which would have meant Gleason gets overlooked.

But here is the inarguable fact of Gleason’s performance – when he’s onscreen in The Hustler, the movie is fundamentally better for it and is objectively excellent and exciting.  When he’s off-screen?  It’s tedious.  If he can make the movie overcome its tedium just by showing up, that says volumes about the value of what he’s doing.

A talented pool hustler nearly destroys himself with self-confidence and desperation, and learns the hardy way that winning requires more than raw talent and belief.

Best Picture 1961 was West Side Story, the ‘classic’ musical directed by Robert Wise and Jerome Robbins.  While that film has it’s issues I’d probably rather watch it than The Hustler.  Yes, it would mean I couldn’t have the Jackie Gleason performance I spent the top of this entry raving over, but in return you get a fantastic Rita Moreno performance.

What ultimately ruins The Hustler is the middle-75 minutes, the period of time that exists between the Jackie Gleason’s scenes.  During the time when Gleason is onscreen, you get dynamite.  You get what I’ll call ‘pure cinema’.  It does not explain, it does not hit you on the head with anything, it just exists.  Drops you in and there you go and lets Gleason do the driving.

When Gleason is not onscreen, though, the pace slackens, the story bogs down in repetition, and frankly becomes boring.  Sure, George C. Scott does his best to liven it up, but he can only do so much.  Not even a climactic showdown between Gleason and Newman over the pool table manages to salvage this sunken ship.

To be blunt, it all comes down to this – West Side Story is inherently silly and earnest, and is at least unintentionally-funny at many spots, which is good for something.  On the other hand, The Hustler is tedious, stuck in self-seriousness, and is immune from being goofed on.  Which means it is death.

The weird thing is that, of the two films, The Hustler is far-and-away the better-acted film.  It has no gross caricatures, it has no white performers in makeup to play ethnic.  Its performances are legit.  But legit performances cannot save the film, and cannot make it cohere.  It’s just another bit of proof that, no matter how good the performances are, they are still at the mercy of the editor and director, who retain the right to make the movie around them suck.[2]

[1] Full disclosure, I haven’t seen Mona Lisa in quite a while, so have no strong memories of Hoskins’ performance.  That said, he was winning all the pre-Oscar awards, so momentum was with him.  As for Newman, I have seen The Color of Money a couple times and have strong memories of it, particularly that Tom Cruise was the standout performance there.  Which is probably a theme to explore elsewhere – why did Paul Newman and Dustin Hoffman win Oscars for films (The Color of Money and Rainman) when Tom Cruise was decidedly-better in those same films.