To be fair, I’ve only see one other Fellini film in it’s entirety – that being La Dolce Vita – so it’s not like I’ve done a deep dive on his oeuvre and decided he’s not the  filmmaker for me.  That said, I only made it to the end of La Dolce Vita because I felt like I had to.  That because it was a ‘historical’ and ‘important’ film I was required to finish what I started and, if I didn’t like it, or get it, that was on me for being a philistine. 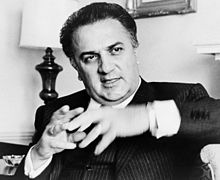 And that, dear readers, might be the harshest dig I can lay at the feet of La Dolce Vita – it felt like homework.  It felt like something I had to do.  I didn’t do it because it was joyful, or gave me pleasure; no, I did it because it was required.  And even though people tend to have a good recall for things they dislike – it’s shocking how many times I’ll find myself with a Red Hot Chili Peppers song stuck in my head, even as I find their music detestable – I remember almost nothing from La Dolce Vita.

The two things I do remember?  The statue of Jesus flying over the city – at least, I think it was Jesus – and the woman flopping around in the fountain.  Of course, given those are the two clips regularly pulled from that movie to include in clips packages or video essays, I may only have a memory of them because of their ubiquity, not from my viewing of the film.  Which might actually double-down on the dig I made before – not only was the film homework, but I remember nothing from the experience of watching it, other than I disliked it.

Given this, it’s no surprise that when I tried another Fellini film – 8 ½ – I found it no better.  The difference there was I had no qualms about giving up after ten minutes or so.  Without the promise from his other films that there was joy waiting for me in the movie if I just gave it a chance, I quit.

Here’s a hard truth about 8 ½ – I’ve actually given up on it twice, about a decade apart.  And both times, it was basically at the same spot in the movie.  That point where you’re deep enough in to get a sense of the tone and mood and have to decide if this is a way I want to spend two hours of my life.  Like Amarcod, I found 8 ½ a bit disorienting and uninvolving, and did not buy into the navel-gazing it does.  But, because I did not make it to the end of that one, I can’t say if it fails to coalesce, as Amarcord fails to.

The truth about Amarcord is that, were it not for having seen all five Best Picture nominees from 1975 and trying to find something else from the Best Director category to watch for this series, I would not have even picked up the film, or made it to the end.  Yes, it was homework, but in it’s way, Amarcord is the perfect film for this Project, at least in terms of satisfying my beginning intent, which was to force me to experience films I otherwise would not have.

But that did not mean I enjoyed it.

As a film, Amarcord is a memory piece that is basically a year in the life of a little Italian town in the 1930s, telling the story through vignettes of the disparate characters, just as the fascists are coming to power.  It’s plotless and meant to be a comedy, but it’s not especially funny.  It’s also not especially dramatic.

And when the film strays from the loud, it does things for seemingly no reason.  A man climbs a tree and shouts for five hours he wants a woman.  A motorcyclist races through the film about every ten minutes.  Fascists appear out of a cloud of black smoke that seems unmotivated.  In all, there is something going on here I don’t get and, frankly, I don’t think I’m meant to get.  Before, when I called this a memory piece, I meant it as a piece of the director’s memory – it means something to him and might make him laugh, but separated from the context of having lived it, it means nothing to me.

To be fair, there is one line I actually did laugh at.  At one point, Grandpa pinches the maid’s butt one too many times, making her yell at him, “What?  Do you think my fanny is a good-luck charm?”  In the entire film, that’s the one time I laughed – honestly, it sounded like something my wife would say to me when I get a little ‘handsy’ with her.  Otherwise, this ‘comedy’ was simply tedious.

As if to prove I’m missing something, and you shouldn’t always take my word for it, Fellini might be the most lauded foreign language filmmaker in Oscar history.  After all, he personally received 12 Oscar noms, independent of his films being nominated for Best Foreign Language film, and four of those noms – FOUR! – were as Best Director.[1]  On top of which he’s directed three films to Best Foreign Language Film Oscars.[2]  Never mind he was given an Honorary Oscar in 1993, which might be proof enough of his esteem with the Academy: after all, when you give a man three Oscars for Foreign Language Film, then give him an Honorary Oscar, it’s clearly not to make up for some past oversights, but to really emphasize how much you love him.

Best Picture 1975 was One Flew Over the Cuckoo’s Nest, which I ranked as the ninth-best Best Picture Winner in the final rankings included in the published volume of The Best Picture Project.  Under those circumstances, Amarcord has a tough hurdle to get over to be declared Better than Best.  Without surprise, it does not.

And it also does not surprise me the film failed to rate in the Best Picture race because the nominees for Best Picture 1975 were a murderer’s row.  Honestly, 1975 might have the best Best Picture contest ever – One Flew Over The Cuckoo’s Nest, Barry Lyndon, Dog Day Afternoon, Jaws, and Nashville all vied for the prize.  Top to bottom those films are classics, with the weak link of Dog Day Afternoon being a far-better film than Amarcord ever will be.  But even in a weaker year, I don’t see Amarcord cracking the list for the simple truth that, if Amarcord is not even recognized as one of Fellini’s best, how could it possibly compete for Best Picture?

So here’s the thing: I talked just a few short paragraphs ago about Fellini easily being the Oscars favorite foreign director, by virtue of winning three Oscars for Best Foreign Language Film, on top of the Honorary Oscar they gave him in 1992.

Well, recently, I was looking for info on Jan Troell’s film, The Emigrants, on Wikipedia for an upcoming entry in this series and clicked through a link to the page for the Academy Award for Best Foreign Language Film.  Specifically, I clicked through because I was curious what film beat The Emigrants for Best Foreign Language Film, considering it was also nominated for Best Picture.[3] While peeking down that rabbit hole, I happened to find a blurb that said, in effect, for most of the history of the category the actual recipient of the Best Foreign Language Film was not the filmmaker, unless they were specifically included in the nomination, but the country it came from.[4]  In other words the country wins the Oscar, not the filmmaker, and if the filmmaker kept the award, that was between it and the country.  Apparently this rule has since been changed.[5]

What’s my point?  You remember those three Oscars I said were Fellini’s?  Turns out they actually belong to Italy.  Ergo, the Academy it wasn’t just giving him extra love when they handed him the 1992 Special Oscar, they were straight up giving him his first Oscar.