Screenplay by Ranald MacDougall, based upon the novel by James M. Cain

Everything I know biographically about Joan Crafword comes from two sources:

While the two portrayals differ on the child abuse she’s alleged to have inflicted, both agree Crawford’s drive for success knew no bounds.  You Must Remember This spends a bit more time going into what lurked beneath that drive and did yeoman’s work trying to humanize Crawford in a way Mommie Dearest never would, but at least both properties agree on this particular facet of her personality.

For Crawford there wasn’t just one type of success – there was two.  One being financial, the other artistic.  Financial success came first, with Crawford essentially willing herself to stardom in the mid-20s – the silent era – and holding it into the 30s and beyond.  As such, she earned a star’s salary.  Of course, as happens to many successful actresses, a string of underperforming films was blamed on her and so she was inevitably labeled ‘box office poison’.[2]  But Crawford was too driven to let the name stick and emerged from it, reinventing herself as needed to keep her fortunes going.

Financial success could occur by force of will, but artistic success was different, especially when that success is largely determined by awards voters, marking up ballots in the privacy of their own homes.  This means that while her talent was obvious, the awards voters never gave Crawford love the way they gave it to Bette Davis or Kathryn Hepburn – she received no nominations at all for anything prior to Mildred Pierce.  When she saw the script for Mildred Pierce, and saw the part it promised, Crawford must have suspected this was her chance, and so she went for it.  And not just went for it, but went for it – so determined was she to snag the role that even though director Michael Curtiz wanted anybody else but her for it, she agreed to a screen test, which was not exactly a little thing for a star of Crawford’s wattage to agree to.  Reluctantly, Curtiz cast Crawford,[3] and the film proved a critical and box office success.

And that Oscar that eluded her all those years?  Crawford finally got to take one home, in a manner of speaking.  After all, she was actually at home on Oscar night, claiming sick but really just terrified of the humiliation that comes with losing, and when she won, they brought the award to her. 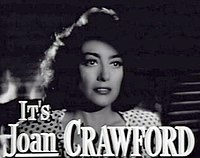 After Mildred’s husband leaves her for another woman, she alone supports her two children.  To make ends meet she takes the only job she can get: waitress.  But Mildred isn’t one to just ‘make ends meet’, she wants the finer things in life.  Specifically, she wants them for her daughter, Veda (Blyth).  Driven by this, she opens a restaurant of her own, then several more, and becomes very well-off, very quickly.  Despite success, Mildred always carries a blue-collar attitude.  Unfortunately, giving Veda everything she wants only turns her into an unbelievable snob, and an ungrateful bitch, who will never be pleased by Mildre.  Mildred, though, can’t stop herself trying to please Veda and eventually she runs the business nearly into the ground to accomplish it.

First and foremost, the dialog is tops.  Not necessarily in what is said, because it’s not all jazzy or Juno-cute dialog in love with its own cleverness; rather, it’s how it’s said.  Each line rolls easily off the tongue, snapping together perfectly.  Which is a lesson to all aspiring directors – even a mundane movie can be improved by good delivery of dialog.  No matter how inane that dialog may be.

The supporting players are all great and each gets their own chance to shine, if only in small ways.  Jack Carson as Wally Fay is just ingratiating enough to make you think he’s not an outright creep, which he absolutely is.  Zachary Scott as Monte Beragon is delightfully oily and completely unashamed of his no-goodery.  Ann Blyth nails the devious brattiness of Veda.  Eve Arden charms in her few scenes as the restaurant manager/best friend to Mildred.  All in all, everybody knew just what kind of movie they were in and came to play.

But as wonderful as the supporting players are, and much as they give this stew flavor, this movie is really a show for Crawford – everybody else might be in her movie, but it’s her movie.  And in it she does everything you expect – she cries, she pleads, she exudes confidence and desperation, she lives by her wits, she’s vulnerable, flirtatious and, yes, sexy.  If nothing else, Crawford deserved an Oscar for showing how to play melodrama without letting it become ‘Melodrama’, which might actually have been a lesson Faye Dunaway should have learned from when she later portrayed Crawford, but so clearly did not.

Perhaps the best part of Crawford’s performance is how willing she is to let herself be the fool to somebody else, and be completely dominated by them – Ann Blyth’s Veda.  Normally, a star would never put up with such a thing, because they had to be the heroes of everything in order to protect their ‘image’, and could never show weakness.  But here Crawford owns Mildred’s shortcomings and shows us just how easy it is for parents to protect their children, i.e. enable them, even when their children have done some pretty heinous things and need punishment and the help they’re given is leading the parent to ruin.

Honestly, there’s little that’s bad.  And even then, what is bad is not all that bad.  At least, not in a way that takes away from enjoying the movie.

The murder plot bookending the movie feels tacked on and phony, probably because it was tacked on by the studio to satisfy the Hay’s code, which required evildoers in movies to be punished.  Instead of finding another way of punishing Veda – the evil daughter – they turned her into a murderer and took her off to jail.

Aside from that, many of the characters are shallowly drawn, especially Veda, who is one-note.  To be fair, the one note she plays is played perfect.  But, that doesn’t change its one-note.    That said, this film is set up as a thriller and a noir and in those types of films the characters always tend to be archetypes of some sort or another.  So, under the circumstances while some shading to the characters might be nice, it’s understandable why Crawford is the only complicated character here.  And to be clear, the depth or lack thereof in the characters is just a nit I pick and in no way detracts from the film.  It’s said here more as an aside than anything else.

Michael Curtiz is probably a director most people don’t know today.  And if they do, they mostly know him as the director of Casablanca – yes, casual film fans, that movie did not just will itself into existence without a director, no matter what Harry and Sally and Robert McKee might have you believe.  But even if he was something of a studio director, regularly taking on films of varying styles, and therefore not what we’d think of when we think of ‘auteurs’ – aside from this and Casablanca, he also directed Yankee Doodle Dandy, White Christmas, co-directed The Adventures of Robin Hood, and finished off his career making Elvis pictures – he brought a level of professionalism to them that is quite impressive.  In some ways, if your virtue is professionalism that’s being damned with faint praise.  But never forget: it’s still praise.

Beyond that, Curtiz was nominated for Best Director four times, including twice in the same year;[4] finished runner-up as a write-in candidate for Best Director another time;[5] and aside from the Oscar he copped for Casablanca, he also won in 1939 for the Short Subject Sons of Liberty.

But more than being capable of overseeing the direction of a varied number of films, he coaxed 11 Oscar nominated performances from his casts, including the win here for Joan Crawford and James Cagney’s win in 1942 for Yankee Doodle Dandy.

Given that, it’s a shame Curtiz is not more well-known today and not talked about in the same breath as the usual auteurs, even if between Casablanca and White Christmas he directed two of cinemas most popular and enduring classics.

The best thing to be said about movies made during the Hay’s Code Era of Hollywood is they had to be a little more creative in how they got across their sexual content.  They couldn’t just show Joan Crawford fuck a guy, they had to imply it.

My favorite bit of Hay’s Code evasion here doesn’t even concern Crawford, but happens when Wally (Jack Carson) checks out Ida (Eve Arden) when she’s standing on a stool, plainly undressing her with his eyes.  Rather than let it pass, Arden cheekily tells him, “Leave something on me, I might catch cold.”  It’s almost minor, in comparison to Joan Crawford fucking a guy, but I liked it.

Best Picture 1945 was Billy Wilder’s The Lost Weekend, starring Ray Milland.  Interestingly, Milland was not the actor Wilder wanted in his film either, meaning both Best Actress and Best Actor 1945 went to stars of films who were not what the director ordered.  To be fair, Milland is a very meh actor – though I do enjoy his work in, and on, Panic At Year Zero – while Crawford actually has the goods.

Of the two films – The Lost Weekend and Mildred Pierce – both are about as good as the other.  I’m not passionate about either, but I don’t think one beating the other is a travesty, no matter which one did the winning.

If I had to pick a film from 1945 that at least deserves a little more attention than it got at the time, I’d point to Robert Wise’s The Body Snatcher, starring a very game Boris Karloff.

Butterfly McQueen, better known for her hysterical, and not exactly race-positive, portrayal of Prissy from Gone With The Wind – “I don’t know nuthin bout birthin’ no babies, Miss Scarlett!” – has a small part to play here.  Unfortunately, the only part for a black actress to play in a Warner Brothers movie in the 40s was a maid.  Typical.  That said, she does play the part with dignity, doesn’t have to scream anything about birthing babies, and there is a respect for her from most everybody else in the film to the extent she comes across as a human being, and not as shrill servant.  It almost feels progressive.  That is, until you remember that McQueen will always play the maid, and will never play Mildred.

Bruce Bennett, who played Mildred’s first husband, Bert Pierce, is probably most recognizable today – at least to me – as the ill-fated guy gunned down by the bandits near the end The Treasure of the Sierra Madre.  But while he did have a lengthy screen career, most impressive is that before going into the movies he was actually a world-class athlete, winning the silver medal in the shot put at the 1928 Summer Olympics.   For a time, he also held the indoor world record in that event.

[1] Dunaway seems to be going for ‘demented clown,’ and achieves it.

[2] Other poisonous stars were Kathryn Hepburn and Mae West

[3] One suspects it was not just that Crawford nailed the screentest, but that nobody else wanted to do the film which got her the part.