Written by Guy Bolton and Ernest Vajda, based upon the novel “Le Prince Consort” by Leon Xanrof and Jules Chancel

First, a confession[1] – I have no history with Ernst Lubitsch.  Yes, I know Billy Wilder wrote for him and revered the so-called “Lubitsch Touch.”  And I know William Wyler[2] also held the man in high-esteem.  But as I’m neither Billy Wilder, nor William Wyler,[3] I have no background with him.  At this point the most I’ve seen from the Lubitsch filmography is about 30 minutes of To Be Or Not To Be, which I recently tried but gave up for failing to engage me.

But let’s be honest, this project was meant as a way for me to clear up the blind spots in my filmgoing history, many of which were created when I turned off a movie for failure to engage with it.  In other words, this project was meant to forcibly educate me by not allowing me to quit on a movie.  In a way, the Project was like castor oil – supposed to be good for me, even if it tasted bad.[4]  Given that, I could probably start most, if not all, of these entries with a disclaimer or confession about my ignorance of a particular film.  So starting this entry with a confession is hardly unique.

What is unique is while this Project is meant to open my eyes to individual films, until Lubitsch it hadn’t presented an individual filmmaker I needed to open my eyes to.  Generally, this is because most other entries to this point were about films from off-brand directors in their one shot at Best Picture glory, with Lubitsch being the first name-brand director I was completely ignorant of.   And given both Billy Wilder and William Wyler thought Lubitsch was some sort of god, I guess I need my eyes opened.  Even if Wyler is a bland director and maybe shouldn’t be given so much respect.

Chevalier plays a high-ranking military officer from some fictional European country, stationed in Paris, who is ultimately sent home when his incorrigibility gets him caught up in one-too-many scandalous romantic entanglements.

Meanwhile at home, the Queen (MacDonald) is unmarried, much to the consternation of her advisors, who actively search for a suitable mate.  The difficulty?  Any man she marries cannot be King and will only ever be a consort – i.e. he will have zero power at all in the relationship, or in his own home, which makes achieving such a match tricky.

It should surprise no one that when Chevalier turns up he and the Queen are instantly smitten and eventually marry.  Only later does Chevalier learn the true extent of his powerlessness in the marriage and is rankled by it.  In order to regain some personal autonomy he threatens divorce and only then do Queen and Consort reach a peaceful détente – for the good of their marriage, and for love, each will cede a little bit to the other.

In a way, the plot of this film is an Alt-Right nightmare come to life and given it is essentially a story of a man willfully emasculating himself for a woman, Chevalier’s character is a likely poster-boy for the Men’s Rights Movement.

The film’s plot, such as it is, is thin and does not have a lot of working parts to keep straight – if it works at all it’s because the actors sell it.  In this case, those actors are Maurice Chevalier and Jeanette MacDonald and it only makes sense to assess the film through them.

Today we remember Chevalier as a well-admired French actor, so well-admired he might be the only Frenchmen to cop an Honorary Oscar.  That said, while I’m not nearly as ignorant about Chevalier as I am about Lubitsch, my ignorance is only marginally better.  In sum, I am privy to just two other screen performances from him:

As to Chevalier’s performance in this film, he really doesn’t give one in any conventional sense and doesn’t seem to be acting at all.  Now please, don’t read that and think I said, “He’s such a natural it doesn’t seem he’s acting,” because that’s not what I meant.  Rather, Chevalier toggles between two expressions: a slightly-lecherous grin and pouting.  To be fair, between those two and his excess of charm – and he gets real mileage from his charm – he does draw attention.  But drawing attention is not nearly the same as acting.  If anything, he’s playing himself and it just happens the character’s personality aligns with his. If ever there was greater proof of his lack of performance it is in his accent.  Consider that while everybody else in his fictional country speaks with a British or American accent, Chevalier uses the thickest of French accents.  Presumably, this is because he couldn’t possible perform his way out of it so, rather than surround him with other French accents, the film hangs a massive metaphorical lantern on his accent, essentially telling the audience, “We know his accent makes no sense, but we desperately wanted him in the film and this was the only way that worked, so go with it, please.”

As for MacDonald, while she and Chevalier have chemistry and it’s easy to see why they made five films together in the late-20’s and early-30’s, she also doesn’t give a performance.[6]  It seems she was cast more for her chemistry with Chevalier and for her singing voice than anything else, and while both of those are good, the rest of her performance is merely adequate and never does anything to suggest her character has any depth or inner-life at all. 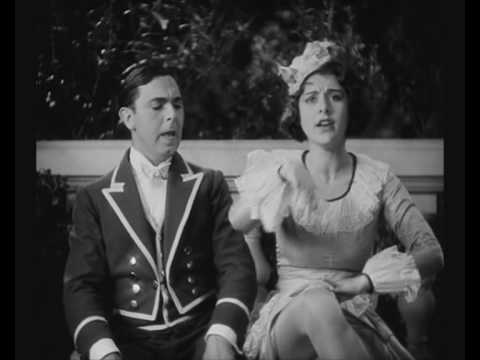 The whole cast has amazing chemistry – on balance, that seems the one thing this film is truly putting out there.  Adequate acting and chemistry.  And even if the performances are not great, at least the performers seem to be enjoying themselves, which means a film that’s honestly a touch long feels lighter on its feet than it should.  Given that, it’s easy to see why it was a hit.[7]

All that aside, while the rest of the cast is about adequate, two performances stand out: Lillian Roth and Lupino Lane as the Queen and Consort’s primary servants.  In their work together they are effortless charming and wonderfully comic.  Better, because this is a pre-Code movie, there is more than a hint of sexiness to Roth’s performance.  Don’t miss their wonderfully-charming duet of “Let’s Be Common”.

A Musical Without Musical Numbers?

The Love Parade is a musical, but not in the way we’ve been trained to expect.  There are no large set pieces or any real choreography – no “Cellblock Tango,’ a la Chicago, or even “Money” from Cabaret.  Indeed, not only is there nearly no choreography, there are hardly any bodies in motion when there are songs.  In nearly every number there are the barest minimum of performers and when the songs are sung it is either done as a single, standing still, or a duo in a rather static two-shot.

Certainly the lack of cinematic motion stems from the difficulties by the at-the-time new medium of sound recording, so to an extent everything is excusable and not something we should get hung up on.  Helpfully, the music seems written to accommodate the technical limitations, with the songs being more intimate and akin to sung dialog rather than show-stopping numbers about the character’s internal lives.

Complaints aside, the singers do have chemistry with one another in the duets – there’s that word ‘chemistry’ again – and even if the story is shallow as all hell, there is at least a genuine feeling of affection to the proceedings.

One thing to note – the songs and music seem to be played/sung live.  I’m sure today that most music on set for these films is a recorded playback, which gives everything a bit of a feeling of perfection and preciousness.  Well, while these things are fine for some folks, I like that the numbers here seemed alive and capable of flexing with the film and didn’t need to be timed perfectly.

On the whole, the movie is good-natured, but not so much to overcome its flaws.

Best Picture 1930 was All Quiet On The Western Front, a film I had no feeling for.  On that criteria, The Love Parade was certainly better than the best.  Going a step further to determine it if was truly the Best Picture of the year, is much tougher, given I have seen few films from that year.  Understandably, I’ll decline to say.

Under these circumstances the better metric is to ask whether The Love Parade will inspire me to see other Lubitsch films in the future.  After all, if he’s a massive blind spot to me then it surely means something if I seek him out later.  But on that criteria the answer is mixed – if I happen to run across his again I’m likely to give it a chance, but I’m not so affectionate of The Love Parade than I’m forcing myself through films that just don’t grab me, nor will I go out of my way to find him.

[1] In our confessional-culture, a confession always seems a good starting spot.

[2] A rather bland filmmaker in his own right, if we’re honest.

[3] And thank the universe for that, because if I were them, I’d be dead right now.

[4] Incidentally, I have no idea how castor oil tastes – I’ve never had it.

[5] My darling daughter is why I know this movie, given she watched it endlessly when she was a little one.  If you want to introduce it to your kids be careful you don’t accidentally show them Paul Provenza’s doc, The Aristocrats, which is a decidedly different movie.

[6] Indicative of her strange performance is that MacDonald insists on saying the word ‘woman’ weird, pronouncing it “Woo-man”.

[7] Assuming, of course, it wasn’t the novelty of a musical movie which drove the box office.