Written by Hesper Anderson and Mark Medoff, based upon the play by Mark Medoff

Unless you’re into Academy Award trivia, you probably did not know that Children of a Lesser God (1986) was the first movie directed by a woman to be nominated for the Oscar for Best Picture.  Other trivia?  It took nearly 50 years of Academy history to get the first directing nod for a woman – Lina Wertmuller for 1975’s Seven Beauties – and then ten years more for a movie directed by a woman to even compete for the top prize.[1]  And it would be two decades after that when a woman would actually win Best Director and her film, The Hurt Locker (2009) would Best Picture.[2]

But while Children of a Lesser God was first, it never actually had a chance of winning:

But, lest you think women had it bad with how long it took to get any recognition, consider the lot of black filmmakers.  The first black man to be nominated for Best Director would be John Singleton for Boyz n The Hood (1991), and the first movie directed by a black man to be nominated for Best Picture would be Lee Daniel’s Precious in 2009.[3]  In fact, it would not be until 2013 when Steve McQueen’s 12 Years A Slave won Best Picture that a film by any person of color would win the top prize.  Sure, in short order two more films by men of color would join the party – Birdman and Moonlight[4] – but that doesn’t mean the Academy is actually woke.  After all, there still has only been one film directed by any non-white woman to rate in the top race – Ava Duvernay’s Selma in 2014.  And if you look at pure numbers, there have only been like four films directed by a black man or woman to rate in the Best Picture race.[5]

Curiously, gay men have actually the earliest and longest success with the Academy, with George Cukor’s take on Little Women figuring in the Best Picture race all the way back in 1933.  That said, take Cukor’s accomplishment with a grain of salt, as he wasn’t exactly ‘out’ in the way we know it today.  So, let’s just call it two steps forward, one step back.

James (William Hurt) is a well-traveled teacher who takes a job at a school for the deaf, where he works with students on their speaking and how to use their voices in the speaking world.  Many kids take well to the lessons, while others are not so interested.  Among the uninterested is Sarah (Marlee Matlin), a once-promising student who graduated from the school to become it’s janitor, living out her days in justified diffidence and resentment of the world-at-large.

The Good and the Bad

Too often movies adapted from plays struggle to be sufficiently cinematic when moving from stage to film, ignoring that it’s not enough to simply move indoors scenes outdoors, because changing the setting of the action isn’t the same as changing the complexion of the action.  Which means it doesn’t change the fact it’s still a play.

Sometimes, when plays can’t shake their origins they simply embrace them – see e.g. Fences and Chicago.  Other times, when the source material proves a problem, the film treats it less as a holy text and more a jumping-off point – see e.g. Cabaret.  Having not seen, nor read, the stage play Children of a Lesser God, I cannot say which way the film treats its source.  But I can say that, mercifully, it does not betray its stage origins in the transition to the big screen.  Indeed, unlike many adaptations, this film does not feel closed off or restricted or overly verbose; rather, it feels open and organic and natural.

Children is generally well-acted.  The ensemble playing the students are a varied crew – as high school kids would be.  Better, they aren’t all overly articulate, as you tend to see in films about teenagers.  Rather, some are shy, some are talkative, some are standoffish and each is nothing short of genuine.  It’s too bad none of these kids had any acting career to speak of after the film, because if given the chance you could see many of them doing good things.  That said, if Hollywood struggles to find opportunities for actors and filmmakers of color, it’d be a miracle to think they’d find similar opportunities for a whole troop of deaf actors.

Hurt acquits himself well, making his ‘white savoir’ seem less-problematic than he actually is, even as he struggled to make it sound noble and not just clueless when he says, “I’ll take care of you, Sarah,” after she’s made it clear she can take care of herself.

Piper Laurie is well-used, though at first she appeared wasted.  After all, she shows up early on for one scene as Matlin’s mother, and just oozes ‘Bitch’ from every pore.  It comes so naturally it’s like she’s not even trying.  Then, when she immediately disappears from the film I wondered what the point was of having her turn up at all if all she was going to do was that one scene.  Was she so hard-up for a house payment she’d take any thankless role?

It was only deep in the film when she reappeared, this time with all the vulnerability and care you’d expect from a mother, that you realize why Piper Laurie was hired.  You get an actress of her caliber for small parts for the simple fact you know they are professional and carry those moments without a fuss.  It proves that sensible casting is the key to compelling drama.[6]

If I have one complaint with the film at all, it is with the pacing of the story.  For about half the movie we see Hurt and Matlin sort of sparring with one another – to be fair, it is more Hurt sparring, Matlin running away – as he tries to get to know her and impose his world-view on her.  Then, after she gives in ever-so-slightly and they have one dinner together, he starts talking about being in love with her.  Yes, this is supposed to be a love story, but the way the film rushes right into it doesn’t strike me as romantic, it strikes me as wrong.  Worse, is that rather than have Matlin reject this quick advance – because of course she would – she turns from diffident to felicitous in the same amount of time.  In all, the turn seems to happen more because the plot requires it and not because it seems to truly happen. 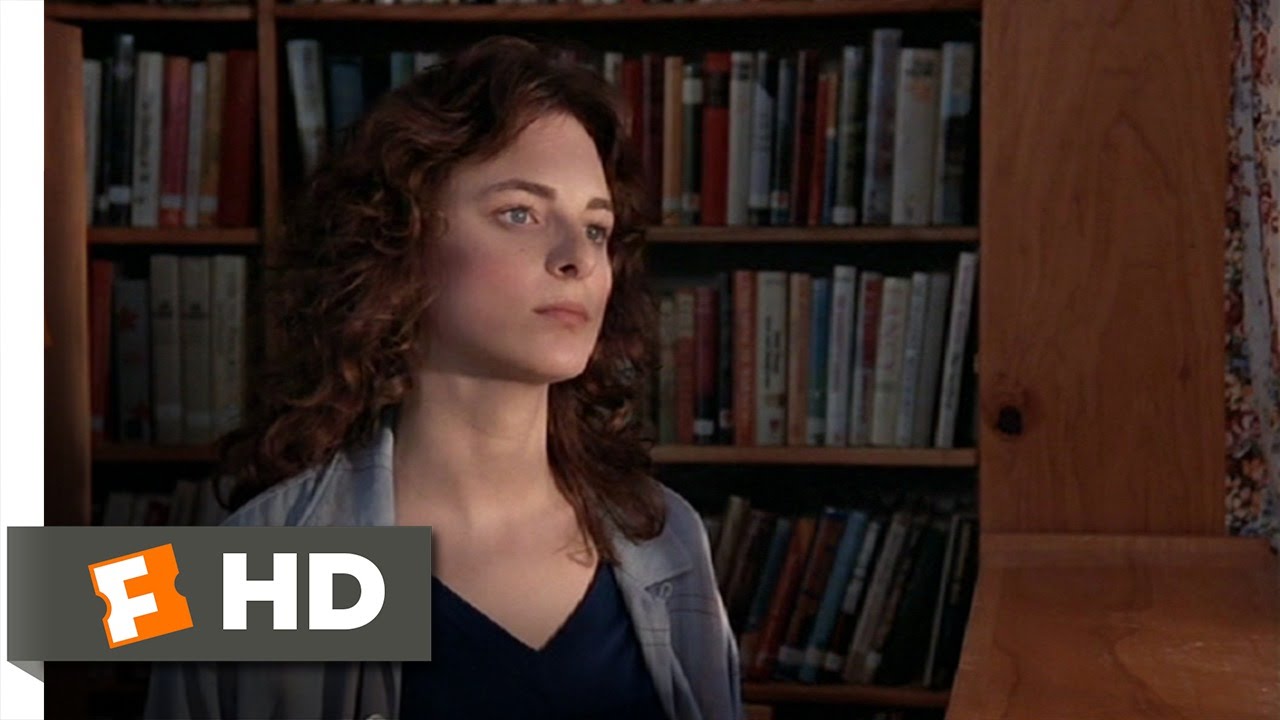 If we’re honest, Matlin’s character in Children is not the lead – she’s clearly secondary to Hurt in every way.  That said, she is the star and is magnificent in a difficult role.  Unlike a speaking actor, she did not get to use her voice to give shading and nuance to her performance.  Instead, she’s forced to color it in with only her expressions and gestures.  In what could easily have become the modern equivalent of a silent-movie-era caricature, she is subtle and moving.

To be fair, Matlin’s performance isn’t entirely silent – she does have one brief vocal outburst about ¾ of the way through the film, which was by design.  And when we do hear her, after all that determined silence, it packs a punch.

But here’s the thing about Matlin’s win – being the first deaf person to take an Oscar inevitably asks the question of whether the win was for having legitimately given the best performance, or  was it an award for sympathy or a gimmick.  In other words, did she win because she was deaf, or did she win because of the performance?  And as that question is inevitable, the answer is inevitably unclear.  And unfair.  Unfair because it reduces Matlin’s performance to some sort of ‘otherness’, and treats her not as an actress, but as a trained monkey.  Like, “Look what this deaf lady can do!  Isn’t it great!”  But the answer is truly unclear because being deaf is so much a part of the performance it’s hard to separate the uniqueness out of it.  This is all-the-more-apparent when you remember no other deaf actor has even gotten nominated or had a film role of any consequence since then.

But even as the question is unfair and the answer is muddy, the truth is Matlin is legit.  Her performance is wonderful and, unlike other actors, she didn’t prove to be a one-hit wonder.  Sure, the win might not have translated into traditional stardom, but she achieved a greater-than-expected level of stardom for a deaf woman, and has had a long working career as an actress.  So, while the Academy might not have had the best motives in mind when they gave her the Oscar, at least we can take solace in the knowledge they gave it to the right person.

As an aside – I’ve been re-watching My Name Is Earl lately and forgot Matlin has a role in the second season, showing up as Joy’s lawyer after Joy is arrested for accidentally abducting a man and is staring down her third strike.  It was such a delight when Matlin appeared on-screen, using her deafness to great satirical effect.

At the time of it’s release in 1986, some critics complained that Children was told from the hearing perspective, rather than the deaf.  Specifically, that everything the deaf characters say has to be repeated by a speaking character when they don’t need to be – after all, the speaking characters in the film understand sign language, so there is no need to repeat what is said in the signs other than to tell the audience what was said.  As a viewer, I feel these complaints and wish the film were subtitled and freed from the spoken translations by the other actors that litter the film – that would have been better and more authentic.  But, even as I wish it, I see why it was done – in a country where subtitles are the kiss of death, especially in a film that’s already going to be a difficult sell for many people, if making the other actors provide translation in real time is what was needed to get people to see the movie, then so be it.

Platoon was your Best Picture 1986 and I honestly don’t know if Children is better than it.  After all, Platoon was a brutal and powerful film and would not be denied by the Academy.  That said, Platoon is not my favorite.  Perhaps the only thing that matters is this: if I had to choose which to re-watch, it’d be Children – Platoon might be the better film, but it’s not one you enjoy.

[1] Ironically, director Randa Haines would not share in the spoils of the nomination, as she was not a producer on the film.

[2] That winner was Kathryn Bigelow.  And maybe helping her to the win?  The movie was in a traditionally ‘male’ genre.

[3] And if you read these footnotes, you know that Daniel’s, and the film, lost to Bigelow and her film.

[5] The number increases slightly if you count films directed by Asians (Ang Lee) or Mexicans (Inarritu and Alfonso Cuaron).

[6] Obviously the casting was right because Laurie was nominated for Best Supporting Actress for her few scenes in the film.