Written by Samson Raphaelson, Joan Harrison and Alma Reville, based upon the Novel “Before the Fact” by Francis Iles

Alfred Hitchcock arrived in Hollywood in the late-1930’s, after more than a decade of success in British films, determined to find new worlds to conquer.  The move had been contemplated for years, held up by a variety of factors, not the least of which was no studio wanted to pay top dollar for the most successful director of British films, because who the hell watched British films? END_OF_DOCUMENT_TOKEN_TO_BE_REPLACED 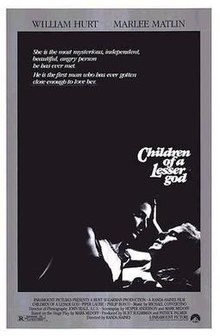 Written by Hesper Anderson and Mark Medoff, based upon the play by Mark Medoff

Unless you’re into Academy Award trivia, you probably did not know that Children of a Lesser God (1986) was the first movie directed by a woman to be nominated for the Oscar for Best Picture.  Other trivia?  It took nearly 50 years of Academy history to get the first directing nod for a woman – Lina Wertmuller for 1975’s Seven Beauties – and then ten years more for a movie directed by a woman to even compete for the top prize.[1]  And it would be two decades after that when a woman would actually win Best Director and her film, The Hurt Locker (2009) would Best Picture.[2]