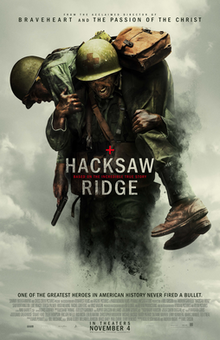 Mel Gibson is apparently a despicable person for having spouted off the kind of intensely-virulent things you’re lately hearing out of the jags in Alt-Right.  That is, the kinds of things you wouldn’t think people would say out loud, even if that’s what’s in their hearts.  He’s said to regularly use derogatory terms for Jews, threatened to have a girlfriend killed, used various epithets for all peoples whose skin is not white, and has been fairly insensitive to gay people. END_OF_DOCUMENT_TOKEN_TO_BE_REPLACED

Written by Rian James and James Seymour, based upon the novel by Bradford Ropes

Fact #1: My daughter is a student at my alma mater, Michigan State University.[1]  She lives on-campus and during her freshmen year she had no car, which meant if she wanted to come home, my wife or I had to go get her.  You get no prize for correctly guessing what my wife and I did every other weekend last year.[2]

Fact #2: I am a runner.  I run four times a week, at least 7 miles each of those days, and make my longest run on Sunday’s.  Typically, the Sunday run is in the 11-12 mile range, though as I’m training for a 34-mile trail run in April, the Sunday run has lately been closer to 20-22 miles.  Either way, on Sunday’s I run a lot and this means I’m always hungry. END_OF_DOCUMENT_TOKEN_TO_BE_REPLACED

Screenplay by Barry Jenkins, Story by Tarell Alvin McCraney, based upon the unproduced play “In Moonlight Black Boys Look Blue.”

In 1993 Marissa Tomei was nominated for Best Supporting Actress for her broad, yet smart, take on a goomba’s-girlfriend in My Cousin Vinny.  It was a bit of a left-field nom, to be sure, given the film was basically comedy built on cliché, a type of film the Academy rarely has time for,[1] and she didn’t even manage a Golden Globe nom for the role.  Plus, her opposition was the type of nominees, in the types of films, that normally got academy affection – Judy Davis in Husbands and Wives, Joan Plowright in Enchanted April, Vanessa Redgrave in Howard’s End and Miranda Richardson in Damage.  No surprise that the race shaped up with Davis and Redgrave as front-runners.  Come Oscar night, though, when Jack Palance opened the envelope and read Tomei’s name as the winner, it was a literal twist-ending. END_OF_DOCUMENT_TOKEN_TO_BE_REPLACED

Written by Carl Mayer, based upon “The Excursion to Tilsit” by Hermann Sudermann

Welcome, loyal readers, to the greatest day in Best Picture Project and Also-Rans Project history.  You should stop whatever it is you’re doing right now and mark down this date on a calendar because you, dear reader, are bearing witness to a once-in-a-lifetime event.  And in the future, when your grandchildren look at you and say, “Grandpa/Grandma, what was it like when The Best Picture Project, and The Also-Rans Project, crossed-over?”, you can tell them exactly where you were when it happened, and exactly what it was like. END_OF_DOCUMENT_TOKEN_TO_BE_REPLACED