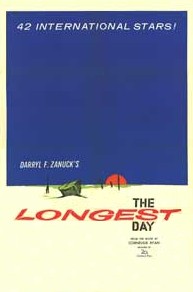 Screenplay by Cornelius Ryan, based upon his book.  Additional material by Romain Gary, James Jones, David Pursall and Jack Seddon

I was out with a running group the other morning, doing our weekly long run in preparation for various spring races that are approaching.  Some are training for 5ks – many for the first time, doing a version of couch-to-5k – while others are after longer distances.  Me?  I’m training for a 33-mile trail run in April, the Chicago Marathon in October, and am not at all ashamed to admit I went 17.5 miles, which might be the longest I’ve ever run at one time.  Am I bragging?  Sure, but when you run all that far in a row, you have a right. END_OF_DOCUMENT_TOKEN_TO_BE_REPLACED