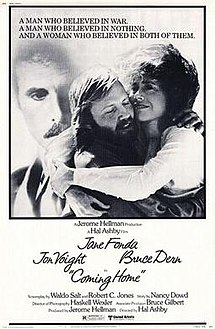 In 1946, the Oscar for Best Picture was won by The Best Years of Our Lives, a film about the struggles a trio of WWII vets face when adapting to civilian life again – their biggest struggle seems to be PTSD, though one of them really has problems with the fact that his hands were severed in the war.  It hit many of the expected bits, shied away from politics, and won a fistful of Oscars. 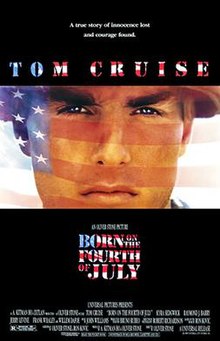 In 1989, Born on the Fourth of July was nominated for Best Picture and Best Actor, and pulled down the awards for Best Director and Best Editing.  That film is about the effect of Vietnam war on one soldier, who returns home paralyzed.  Rather than hit the usual beats, Born on the Fourth of July challenges the audience at every turn, showing a story of a good, fervent soldier who ultimately comes to question the cause he fought for, and ultimately turning political.

The obvious bridge between these two films, and therefore plays in a sense like an average of both?  Coming Home.  A movie that hits many of the expected beats from The Best Years of Our Lives, but makes sure to inject them with a bit of the politics that would dominate Born on the Fourth of July.

When Sally’s (Fonda’s) husband (Dern), a captain in the Marines, is sent off to Vietnam, she kills time volunteering at the VA, helping out with the vets who came back from the war seriously disabled.  In her work she meets Luke (Voight), a disillusioned, paralyzed marine.  Though he is quick to anger, in time they bring each other out of their respective shells – his is mis-directed rage and self-pity, her’s is the repressed life of a military wife – and start an affair.  Eventually, Sally’s husband returns and the three have to deal with the impact of Sally and Luke’s affair.

I can’t just say one positive thing, because there are lots of things to appreciate about the film.

First and foremost is the acting, but that’s not a surprise.  After all, Hal Ashby was never known as a director with any sort of visual style[1]; rather, his films tend to have a skewed perspective and fantastic acting.  That this film has solid acting is just part and parcel of his oeuvre.

As Luke, the paraplegic, Voight is utterly believable.  He projects all the anger and hurt churning under the man’s surface without ever flying over-the-top – subtle is the best description of what he does.  That said, he remains passionate and charming as ever, and it’s a relief he didn’t bother with any sort of accent, like the terrible distraction his Texas accent in Midnight Cowboy was.  And unlike many of his more-recent projects, his performance managed to make me forget all about his recent turn to right-wing-nutjob politics.

As the repressed wife, Fonda is just as good.  In general, I’ve found Fonda an uneven actress, in spite of her two Oscars and seven total nominations.[2]   In They Shoot Horses, Don’t They?[3] her histrionics, and heightened style, were of a piece with the material and film.  In Julia, though, her style distracts and is distinctly out-of-place.  In a movie where the rest of the cast went for naturalism, her theatricality stuck out like a sore thumb and bordered on laughable.  But in Coming Home, where she’s toned down, or in 9 to 5, where her dramatics are played for comedic effect, you can see she’s actually quite good, when the director is keeping an eye on she can actually be quite good.  It must just be a case of needing the right director to keep an eye on her.

The soundtrack is also superb, made up largely of classic rock songs, including cuts from Janis Joplin, The Beatles, Jefferson Airplane, The Rolling Stones, Jimi Hendrix and Buffalo Springfield.  But rather than put them on the soundtrack in that jukebox-ey, overpowering, sing-a-long way of Forrest Gump, Coming Home treated the music mostly diegetically.   Instead of making the movie into a greatest hits album of the late-60s, with the tunes cranked loud, the music was played low and quiet and almost as if somebody left a radio on in the background of the movie.  In this way, the music complimented the film, rather than overpower it, even if sometimes the choice of songs could be a little on the nose.

Look, I like Bruce Dern – nobody can play a grouchy coot like Bruce Dern.  And if there’s a Mount Rushmore of grumpy bastards on film, or off-kilter nutjobs, Bruce Dern would be right up there.  But if Jane Fonda is an uneven actress from film-to-film, Bruce Dern is uneven within the film.

For much of Coming Home, Dern is the best part of the show.  In the beginning he’s appropriately gregarious and anxious to go to war – he’s ready to be a hero.  And when he reacts to the war, and returns from it, after discovering the war was nothing like he’d been lead to believe it would be, he is marvelous at the controlled anger and disappointment.  In short, when he feels cheated, you believe feel cheated with him.

But then, all his good work is mostly undone by his discovery of the affair between Fonda and Voight and his reaction to it.  Where he was subtle and believable before, all at once he turns into a drama-queen, looking all over for a piece of scenery to bite into.  If only those few scenes had been handled better, he might have managed to snatch the Best Supporting Actor Oscar out from under Christopher Walken in The Deer Hunter.  Or, at least he would have made the race a little tighter.[4] 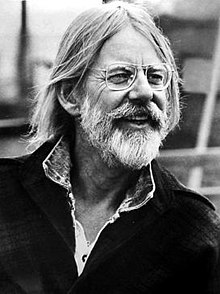 Say Something About The Director

If there’s anything Ashby should be known for, it’s boundary-pushing.  After all, The Landlord featured an interracial affair at a time when interracial marriage was only just determined a fundamental right;[5]  Harold and Maude turned the May-December romance on it’s head first by reversing the sexes of the participants and then really pushing their ages beyond the outer edges acceptability;  The Last Detail turned profanity into artwork and really opened the public’s eyes to the reality of life for many soldiers, i.e. that they weren’t always heroic; and Being There was eerily prescient about the rise and success of the political idiot.

In one sense, Coming Home does not fit with his canon – it’s about the straightest film Ashby ever did.  But at the same time, that it drew attention to the very real plight of returning vets, and their disillusionment with war and lack of proper medical treatment, makes it as out-there as any of the rest.  And given how Ashby basically told the story in a very subdued way, one gets the sense that Coming Home might be the closest to his heart of all the movies he made.

Better Than The Best?

Despite the presence of Midnight Express and Heaven Can Wait in the Best Picture and Best Director race,[6] neither film stood a chance against Coming Home and The Deer Hunter.  What makes the 1978 Best Picture race unique that year is that, not only do you have the first truly Vietnam war film in the race, you also have the second.  Better is both films could not be dissimilar, meaning there was a lot to compare and contrast.

Where The Deer Hunter looks for the drama – the Operatic Drama – and doesn’t hesitate to go for the epic and bravura, Coming Home is content to be smaller, almost like a chamber piece.  Where the one is meant to rouse you with tension and set pieces and Russian roulette, the other aims to be believable, focusing on the emotions of the characters in a realistic, and relatable, way.

In some ways, Coming Home is preferable.  Aside from being believable, it’s also shorter, by more than an hour.  And it is genuinely moving.

On the other hand, The Deer Hunter is exciting – it’s a thriller as much as a drama – and even if it’s over-the-top in most every way, and plays fast and loose with the facts, it never shies away from having the courage of it’s convictions.

All of this is to say that, if either film had won, there’s no reason to complain – both are worthy of the prize, though I would be lying if I didn’t say The Deer Hunter is easily the more memorable of the two films.[7]

Not As Powerful As You’d Think

Coming Home scored acting noms in four categories – Jane Fonda, Jon Voight, Penelope Milford and Bruce Dern – a feat accomplished 15 times in the history of the Oscars, with all but one of those films scoring a seat in the Best Picture race.[8]  Given how rarely it’s happened, that a film gets four acting noms always indicates a breadth of support for the film as a whole and I’m always surprised the film doesn’t/didn’t win Best Picture, especially when a less-than-deserving nomination is bestowed on one of the actors in the film, which in this case is Penelope Milford.

It’s surprising because with the acting branch of the Academy being the biggest, and with support for the film being so broad amongst that biggest branch, that it gives out undeserved nods, it’s natural to think Best Picture is around the corner.  Except…

Except the power of the acting branch is clearly overrated.  After all, of the fifteen films to get noms in each of the four acting categories, only two ever won Best Picture – and the last one happened 63 years ago![9]

Clearly, the power of the actors is overrated.

Robet Carradine plays Milford’s brother, a veteran who was sent back from the war and is in the psyche ward for unexplained mental problems.  At the time the film came out, Carradine was 24 years old, playing a recent Vietnam veteran.  By 1984, when he was 30 years old, he was playing a college freshman in Revenge of the Nerds.  For a while there it truly seemed the trajectory of his career was going to have him play a middle-schooler by 1990.

Two-time Oscar winner, and five-time nominee, Haskell Wexler was the cinematographer on the film and was a famous lefty.  Most famously he directed the movie Medium Cool.  He also no-doubt met Hal Ashby on In the Heat of the Night, upon which they both worked – Wexler as the cinematographer, Ashby as editor.  For more on Wexler, seek out the doc about him his son made called, Tell Them Who You Are.  If you love movies, you won’t be disappointed.

I couldn’t find a still or screengrab for it, but I’m pretty sure director Hal Ashby drove by in the in the other convertible at the end of the film.

[1] Which might explain why he isn’t as revered as many of his contemporaries from the second Golden Age of Hollywood.

[4] Sorry, but despite whatever political or factual problems snuck into The Deer Hunter, Christopher Walken is a boss in it.

[7] That said, memorability is a poor gauge of a films quality – after all, The Human Centipede is memorable, and nobody thinks it’s good.

[8] Three of those times, there were five noms in four categories – From Here To Eternity, Bonnie and Clyde, and Network.

[11] He was Marty’s older brother in Back to The Future.