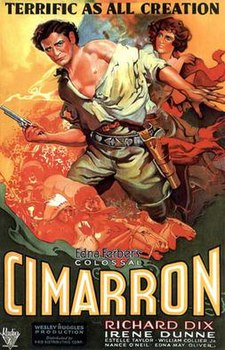 Screenplay by Howard Estabrook, based upon the novel by Edna Ferber

Here we are friends – after these many, long years together, with you diligently consuming every entry of The Best Picture Project, and me, less-diligently, producing them, we’ve reached the end of the road, where it all comes to an end.  And coming here almost feels bittersweet, like somebody should cue Simon and Garfunkel’s Bridge Over Troubled Water, or Boyz II Men’s End of the Road, to play us out.  And don’t worry about neither being appropriate for this occasion, because they’re hardly appropriate for the other occasion for which they are most associated – high school graduations.   If they work there, why not here?

Anyway, we’re at the end of this journey and what I want more than anything is to end it with a film that feels valedictory.  One that makes everything before it a metaphorical fuse, lit to set off this dynamite.  Like now, after years of sifting dirt in a sluice with Fred C. Dobbs, I’ve found the chunk of gold.  Something to inspire me to put pen to paper and write an epic, 15,000-word review.[1]  To end with a bang, as it were.  But—

George Stevens’ Giant is probably the most well-known screen adaptation of an Edna Ferber novel, though I suspect that has less to do with it being any good – it falls just shy of greatness, weighed down by a bloated, heavy-handed second half – than the fact it was James Dean’s final screen performance.  If not for that, it probably exists only as a footnote.

Anyway, as a story, Giant chronicles roughly 25-years – 1925 to 1950 – in the history of the Benedicts, a Texas cattle family forced into the oil business when the boom hits.

Similarly, Cimarron tells 40 years of Oklahoma history – 1889 to 1929 – through the story of Yancy and Sabra Cravat.  In the beginning, Yancy and Sabra travel to Oklahoma to stake a claim to their own piece of happiness in the land rush, only to turn to newspapering and lawyering in Osage when the land claim doesn’t work out.  Yancy, though, has a bit of the wanderlust to him, and never stays put long, departing for off-screen adventures for long stretches, leaving Sabra to run the paper, raise the kids, and experience statehood and the oil boom on her own.  Through it all, we see a wild land tamed.

Given Giant picks up virtually where Cimarron leaves off, Giant is obviously a spiritual sequel to Cimarron, sharing many of the same themes – particularly the indiscriminate hand of progress – and makes many of the same points.

More than that, both have a similar structure: roughly half the run-time of each is devoted to the earliest years of the era, while the remaining decades are allotted increasingly-smaller amounts of time.  By running the story this way, both films start off rich in detail – Giant more than Cimarron – only to later wind up feeling like a greatest hits compilations of the characters’ lives.  Only, rather than put these hits on screen,[2] Cimarron mostly keeps them off, in favor of episodes of speechifying: explaining how Indians are our equals, and women only chose whoring because they had no better option.

Curiously, any of these parts of the story might have been worth exploring on their own – in particular, the story of how Dixie came to a life of whoring would be a fantastic weepy – but as it is, they get short shrift and in the end, who cares?

As Yancy, Richard Dix does what he can with what he has, playing the part of a one-note man with the one-note it deserves – backbone.  As his wife, Sabra, Irene Dunne does even less; initially she’s shrill and unbearable – and racist – only to quickly settle into an inert non-entity who grudgingly gives up her racism.  Both better, and worse, is Estelle Taylor as Dixie – she easily plays the heart-of-gold portion of the hooker-with-the-heart-of-gold cliché, but is far-too-saintly in performance to ever be believable as a hooker.  The only real standout is Roscoe Ates as Rickey, mostly because he stutters charmingly.

In a lot of ways, Ferber’s stories – or at least the two I’ve seen translated to the screen – are as much about economic progress as they are about racial progress.  In Giant, the oppressed minority are Mexican’s, who all the white character’s hate, until one of the children takes a Mexican bride and everybody’s eyes open.  The apparent message?  Mexicans are okay – but only after your son marries one.

Cimarron treads the same ground,[3] only swap out Native Americans for Mexicans, who are nothing but ‘dirty savages’ – the films words – who should be happy their land was stolen from them.  Of course, when one of the family marries a ‘dirty savage’ – again, the film’s words – eyes are opened.  The apparent message?  Native Americans are okay – but only after your son marries one.

The interesting thing is, while Cimarron makes an effort to seem racially progressive, it undercuts it all in its depiction of the black characters.  After all, of the two black characters, one is a sub-Mammy level maid, while the other is a kid (Isaiah) played to the stereotype of the shiftless, ignorant black man.  And so pronounced is the lip-service to racial progressivism that even the most racially progressive character in the film, Yancy, isn’t all that progressive.  Upon arriving in Osage with the wife, and Isaiah, Yancy can’t stop himself pointing out a wagon full of watermelons to Isaiah, who stares goggle-eyed at them.  Mercifully, the movie stopped short of a full-blown Fuzzy Zoeller moment, avoiding any talk about fried chicken and collard greens.[4]

That being said, while the black characters are treated as offensive stereotypes, Isaiah is the only one in the movie to get a truly dignified death and one that the audience is meant to feel. 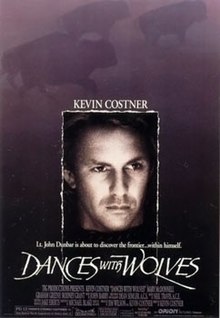 Anybody familiar with Oscar trivia knows just three westerns are said to have won Best Picture:  Cimarron (1931), Dances with Wolves (1990) and Unforgiven (1992).  The only reason these three films are known as westerns is because somebody said they were westerns, and not because anybody actually saw all three films to verify the claim for themselves.  And, of the two they have seen, one – Dances with Wolves – is less a western in the strictest sense, avoiding many of the traditional trappings of the genre to tell a romance, that happens to take place out amongst the Indians and buffalo.

Curiously, while Dances with Wolves is known to have shaky bona fides, Cimarron’s are ignored.  Obviously, this is because Cimarron is watched today only by completists like me, and so most don’t have first-hand knowledge of the fact that Cimarron has even less of a claim on being a western than Dances with Wolves.  Yes, Cimarron starts during the land rush era, when there were legit cowboys and bandits about, but the western trappings are limited: After the first half hour or so, the horses seem to disappear completely, and then, after an hour, the pistols head off with them, replaced by cars and fine suits of clothes.  This doesn’t even deal with the fact that the most western-ish section of the film takes place mostly indoors, but not in saloons, brothels, or other western-themed buildings, where cowboys and whores congregate over cards.  No, it’s in oddly-immaculate newspaper offices and homes with wall-paper, with the camera almost never pointed in the direction of a window, depriving the audience of actually seeing what’s outside and where the buildings sit.  In other words, if the movie didn’t make sure to give you a title card setting the film in Oklahoma in 1890, there are few context clues in the story, or settings, to lead you to believe this movie takes place anywhere.[5]  By comparison, Dances with Wolves is documentary.

Throughout the movie we are exposed to a Mrs. Wyatt, a stuck-up bitch who thinks she’s better than everybody else and makes sure you know it – we all know the type.  Principal of her claims to superiority?  One of her ancestor’s signed the Declaration of Independence.

Eventually, Sol Levy, the merchant, gets tired of being told how inferior he is[7] and after she mentions the Declaration-signer one too many times, he tells her:

“That’s all right. A relative of mine, a fellow named Moses, wrote the Ten Commandments.”

RKO studios won a total of two Oscars for Best Picture – 1931 for Cimarron and 1946 for The Best Yeas of Our Lives.

[2] What drives much of the story though Cimarron’s first half is Yancy’s quest to know who killed the previous newspaper editor.  But, while he wants an answer, and conducts an investigation, we never actually see any of it go down.  No, he simply has a notion he wants to do something about it, then it’s basically a smash-cut to the next scene, where he announces the work is done and he’s ready to expose the killer.  At no time do we actually see Yancy do any of the grunt work needed to get an answer to the question.

[3] More accurately, I suppose Giant treads the same ground as Cimarron, not the other way around.

[4] Fuzzy Zoeller was a pro golfer who, after Tiger Woods won his first Masters Tournament, lamented the idea Woods would order up fried chicken and collard greens for his championship dinner.

[5] All of this also fails to mention the very strange way Yancy shoots his gun – he always draws it and holds it flush against his hip to shoot.  Was there ever a cowboy anywhere who did that?

[6] The only non-Western part of No Country For Old Men?  That it was set in the 1980s – everything else about it screams Western.

[7] Curiously, his inferiority never has anything to do with him being a Jew, which seems historically inaccurate but can also explained by the fact that Hollywood’s original moguls were undeniably Jewish.