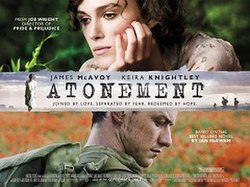 Screenplay By Christopher Hampton, based upon the novel by Ian McEwan

I’ll say it now, because really, it’s the only thing that matters when reviewing certain movies – I don’t like Keira Knightley’s mouth.  I know people say she’s beautiful, and she’s famous and whatever, but for me, her mouth, and her teeth, and the little sneer she gets when she’s trying to emote and when she pulls her lips over her teeth – especially when crying and dramatic – I detest it. I detest it for the way it looks, to the point that no matter the movie, and no matter how invested I am in the film, the second I see her pull that face I’m ripped right out of it and left asking myself, “Who on earth finds that attractive?”

A word of advice to filmmakers who want me to be happy with their film: Don’t cast Keira Knightley.

Atonement is essentially the story of a jealous girl and her mistaken perception of events that lead to the ruination of lives.

In a way, Atonement comes on like a British version of Rashomon, what with how a set of circumstances are seen from a slightly-skewed perspective by a pre-teen girl and misinterpreted from their reality.  Many times we see things occur in two different contexts, each with some slightly difference awareness of the details of the events – such that making the mistaken interpretation seems reasonable, even if it’s still wrong.

In another way, it’s like an exercise law school professors like to put the students through, the point of which was to show the fallibility of eye witnesses.

My ‘like’ and ‘dislike’ for the film break rather neatly, right at the films mid-point, when the story breaks from itself into two distinct halves, each intensely different from one another on many, many levels.

The first half of the movie takes place over the course of one day and evening at some English estate.  The estate belongs to Knightley’s family; McAvoy’s family works it.  Despite coming from the servant class, McAvoy has been educated, and he and Knightley are clearly in love, which makes Knightley’s sister jealous – she is the fallible witness.  Anyhow, some cousins are staying at the house for a bit, and later a brother and his friend arrive for dinner.  Then, a terrible thing happens that sends everybody spinning off into the second half.

From the beginning through the midpoint of the film, it’s an energetic, engaging watch.  The camera is in constant motion, there are visual and editorial flourishes throughout, and the film feels alive.  Even in otherwise-static shots there’s motion and narrative propulsion.

And yet, despite the energy, it also feels subtle, almost delicate, allowing us to make the connections on our own rather than hitting us over the head with them.  On its own, the first half is magnificent.  Unfortunately, it’s not on its own and at the midpoint of the film, things turn into a slog.

It’s here, at the half, where the film leaps forward in time four years, and we start with the aftermath of the misinterpreted events.  McAvoy’s been to prison as a child molester, later released into Army service for WWII.  Knightley’s cut off contact with her family and gone into some nursing.  Her family is basically dead to her, preferring to have the unpleasantness of the events swept under the rug.  And rather than play out over a day, as events did in the first half, these drag on for weeks and months as the war rages, flitting from here to there in time, sometimes rolling back on itself.  We see McAvoy try to survive the war; we see less of Knightley; we see Knightley’s sister tries to atone for her part in the troubles.  In all, rather than be energetic and propulsive as the first half, the second half is a somber slog, lurching from one bit of business to another, until finally the ‘twist’ is revealed.

Inconsistency – overall, the film is inconsistent.  First, is the different energies from one half to the other, when the sense of life the camera has in the first half wilts on the vine in the second.

Then, there is the different conceptions of time from the first to the second, in that the first takes place over a day, while the second takes place over many months.  Look, I know complaining about that sort of thing seems silly, but I believe if a film uses voice-over at the beginning, it should have some semblance of it all the way through – when it doesn’t, I can’t help but feel the random voice over was done to paper over plot holes.  Similarly, I think if a movie sets up a premise where half the movie takes place over the course of a day, the second half should amount to the same – there should be some sense of symmetry to it all.  Certainly, this makes for a challenge for the screenwriter, but I can’t help it – the beginning of the film teaches us how to watch a given film and when those rules are chucked out the window at random, it feels like cheating.

Last, is the tonal shifts.  The film doesn’t feel like it builds on a consistent tone or mood, it just sort of uses one for a while, then abruptly shifts on a dime to another, when it’s convenient.  Jarring.

I loved the motif with the typewriter, specifically the sound of tying.  As I writer, I love the sound of old-fashioned typewriters, so there’s that.  Aside that, I enjoyed the sound is meant to be associated with both the jealous little sister (she fancies herself a writer) and McAvoy (he wrote a dirty note to Knightley), so that when the sound of it returns we are reminded of both the characters and their motivations, as well as giving the feeling of unseen forces controlling everything.  Quite lovely and quite genius.

Only…only at the end we realize it’s not just meant to remind us of those those things, it’s also meant for us to re-contextualize the entire film.  That it wasn’t necessarily a reminder of the characters, but of an unseen narrator weaving a fiction out of their very-real lives.

Better than the Best?

Along with Atonement, the other nominees for Best Picture 2007 were Juno, Michael Clayton, There Will Be Blood, and the eventual winner, No Country For Old Men.  I actually saw all those films in 2007 when they were released – Atonement was the one I had to catch up with and, now that I have, the question is: Was Atonement better?

Honestly, Atonement is only one-half of a good movie.  The first half is skillfully and wonderfully made and, if there was only that half, it might be in the mix for the win.  And to be fair, even in the slog of a back half there are bits and pieces of good mixed in – a particular standout is the long tracking shot on the beach at Dunkirk.  But having just the one good half is not enough to lift it above any of the other four nominated films, one of which is very like the greatest film made in the last 25 years – There Will Be Blood.