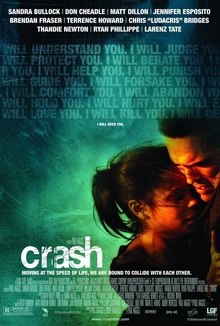 Did you ever feel like the whole world was against you and it was because you were black?  Or white?  Or Muslim?  Or Hispanic?  Or white?  Or whatever?  And more than anything, you wanted to see a movie that confirmed your suspicions, so that you knew you weren’t just imaging it?  Only to preach at you that your problem might be as much your own racism as it is the racism of others?

Well, if you did, Crash is the film for you.

Or, did you ever feel like people hurt each other, simply so they feel alive?

Well, if you did, Crash is also the film for you.

Or, did you ever wonder why it is that people crash into each other?

Thankfully, Crash has an explanation for that, too – “We crash into each other, just so we can feel something.”

In a nutshell, Crash is a sprawling, multi-character story set in and around LA over the course of one day, touching on folks from all walks of life:  not-at-all-average street thugs (Larenz Tate, Ludacris); cops just trying to do the right thing (Ryan Phillipe, Don Cheadle); cops trying to do a different right thing after doing some wrong things (Matt Dillon); upper-class blacks, trying to hang onto their piece of the pie (Terrence Howard, Thandie Newton), and lower-middle-class, hardworking minorities just trying to make it through the day (Michael Pena, Shaun Toud).

Racism.  And that racism is bad.  And everybody is afflicted with it.  And also myopia and lack of irony, maybe?  And—

And nothing – it’s about racism.  And that racism is bad, if you didn’t already know. 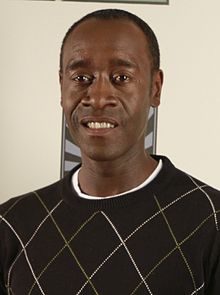 So Crash is a sprawling film, but even so, it is deceptively simple, with a very direct narrative line.  There is no lingering on any moments, there is only incident.[1]  Which is why even though it features fifteen or so major characters, it strikes a breakneck pace, which is how it manages to clock in at two hours.  It’s so on point it hardly bothers with character names, paring them away until they practically have none[2], which is probably why every role has a name actor in it – instead of learning character names, we just go ahead and call Don Cheadle’s character Don, and Terrence Howards character Terry[3], and…

Almost from the moment it won the Oscar for Best Picture, in what has to be called a stunning upset over the infinitely-better Brokeback Mountain, the haters were determined to take Crash down.  From the get go anointed it the worst Best Picture ever, or, if not worst, at least among the worst, as if being a middling movie that happened to win Best Picture made it a steaming pile of dogshit.

Aside from this being obviously hyperbole, it’s just plain wrong.  After all, giving I’ve seen nearly 90% of the Best Picture winners now for this seemingly-never-ending series, I can say definitely that Crash is definitely not the worst, nor even amongst them.   Yes, it’s definitely over-feted, but it’s not all that bad.

Realistically, the crimes that Crash commits are that it’s not a transcendent or groundbreaking piece of cinema, and it’s more manipulative than moving.   It fails by being simply ‘not bad’ or ‘okay’.

But truly, is that fair?  After all, at least the film tries something.  It tries to say something meaningful.  Sure, it muddles the message, but at least it tried, and isn’t that worth something? 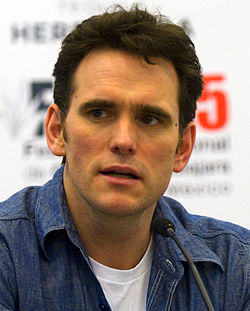 The weird thing is, for not being very good, Crash has lots going for it.  The cast does what it can with what they have – at least the members of the cast that can do something with what they have.  Terrence Howard, Don Cheadle and Michael Pena crush it, and could easily do their parts with their eyes closed.  And those that can’t quite do anything with the material are at least watchable – Matt Dillon hams it up like an actor of his limited range should, and Thandie Newton goes mental like she always wanted to before, but never had the nerve to do.

The direction is surprisingly good – assured.  Haggis seems to know exactly what he’s doing with the camera visually, and composes the frame interestingly, with confidence.  And his handling of many of the scenes, and the emotions in them, are masterful.  For instance, instead of playing out (Spoiler Alert!) Lorenz Tate’s death in a matter of seconds – Bang!  You’re dead! – he lets it linger, lets you see the life leaving Tate, makes it real.  At the end, the death is a gut punch.

And, because the movie cuts out all other bits, the film really has no dull moments.  In some way it’s like Star Wars, or an old Buck Roger’s serial, where every ten minutes something big happens.  Only here, instead of explosions and chases and the like, it’s disgusting racism.

The only thing that fails is the script – everything wrong with this movie is in the script:

If It’s Unworthy, Why Did It Win?

I don’t know if you know it or not, but this film has more stars than there are in heaven – it seems half of Hollywood walked through the movie for a day’s pay.  So many that even Tony Danza shows up for a second, long enough to drop some casual racism before he gets the hell out of dodge.

I also don’t know if you know this or not, but the largest voting branch of the Academy of Motion Picture Arts and Sciences is the actors.  So, you do the math—

Half of Hollywood walked through the film + Largest voting block in the Academy = Best Picture.

But, if the actors were enough to carry the film to a Best Picture win, how do you explain the relative lack of acting noms – only one, for Matt Dillon.   And how do you explain the Best Screenplay Oscar, an award the actors branch can’t vote on?  The actors might’ve carried the film to the Big Prize, but not the others, which begs the unanswerable question – was the movie a recipient of circumstance, or was the movie truly worthy and not the huge upset it’s always seen to be? 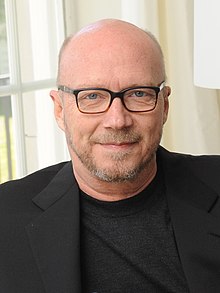 All I Do Is Win

Paul Haggis wrote two Best Picture Winners in a row – Million Dollar Baby and Crash.  One of these films I loathe, which explains why I’ve avoided seeing it for this project until almost the very end.  The other is okay and was discussed in this here post.

[1] In a lot of ways, Crash is like the younger brother to Paul Thomas Anderson’s Magnolia – shallow, dumb, incapable of subtext or subtlety and always learning the wrong lessons. If Magnolia is the brainy kid that got into Harvard, Crash is the dumb brother going South West Eastern State University.

[2] Yes, I’m sure all the characters had names, but after watching it, I’m damned if I remember any.

[3] Don’t you love the thought that Terrence Howard’s people call him Terry?  It just seems so incongruous given the image he seems to project.  On the other hand, Terry Crews hardly looks like a man you’d call Terry, so ¯\_(ツ)_/¯.