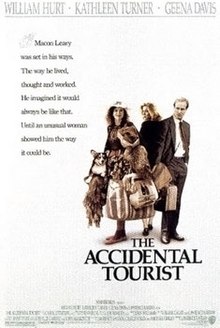 However, after the senseless killing of their child, the writer’s wife (Kathleen Turner) leaves him.  Shortly thereafter, a free spirit (Geena Davis), comes into his life and shakes things up.  And therein lies the central tension of the film and that thing about which the plot revolves – will the writer choose to stay in his rut?  Or will he embrace the chaos of the world?

Is The Accidental Tourist Best Picture worthy?   In a word, no.  Sure, it’s Oscar bait, having the look of being Best Picture worthy, but that doesn’t make it actually so.  It’s got big name actors.  It’s got melancholy.  It’s got earnestness.  It’s got a John Williams score.  It’s got Lawrence Kasdan on the script.  It’s got William Hurt, fresh off a trio of Best Actor nominations – and one win from them.  In the 80s, any of those things might be enough to make a film award-worthy; together, they were almost a guarantee of it.  Without surprise, they carried The Accidental Tourist into the race.

Why not Best Picture?

Because Rain Man was better.  And because a beautiful house with shoddy construction is still a shoddy house.  And lipstick on a pig can’t hide the fact that all you got is a pig.  To be fair, The Accidental Tourist is the best and most beautiful of the pigs of houses, but in the end it’s still a pig.

First, the dialog doesn’t actually read like people talking, or having conversations – it reads like ‘dialog’.  Motivations are laid bare, such as they are, and inner monologues are put in words, if the monologues are had.  In a Wes Anderson film, perfect execution of words and well-turned phrases and neat and ordered conversations are perfectly at ease, but then again, Wes Anderson films don’t take place in the real world.  The Accidental Tourist, though, does take place in the real world and in the real world people are not precise.  They either say too much or don’t say enough, or say the wrong thing or say many wrong things, or inelegantly make their points.

As for the plot, it’s a bit bland and lumbers from place to place because the story, or the script, requires it done, even if the story and the motivations of the characters within it does not.  If only there were something in the film to suggest why any of the parties legitimately do what they do, or especially why care about each other, other than the script requires it for the story to lurch forward, then the film would have something.  But as it does not…

One would think that the novel upon which the film is based has a better explanation for the reasons the characters do what they do, and it surely must – novels are by their nature deeper creatures than films.  However, to give credit to the film for things outside the actual text of the film is cheating.  Films should be judged on what they are and are not, and not for some other thing we wish it were.  Sadly, with nothing in the text of the film to indicate what motivates these people to act in a given way – like real emotions, or desires – it is impossible to believe anything that happens.  And it is especially impossible to believe the characters are real people.

Things might be have been different should Hurt have been better in the film – after all, as the central character in the film the movie lives and dies with him and, given the blandness and passivity of his character, the film basically dies at the feet of his largely-comatose performance. 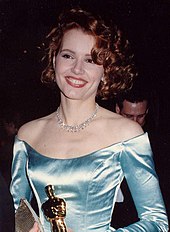 Fortunately, they’re not all bland – Geena Davis has spark and does what she can with what she has.  Honestly, she is the stand out of the film and it’s easy to see how she won the Oscar – for a long time she steals the film out from under everybody.  Unfortunately, her performance still comes across as mangled – not through any fault of her own, but through the construction of the film.   For a while she’s charming – there’s no depth to her, or any concrete and identifiable reason to like her, but at least she’s charming.  Charming and shallow.  And then…

And then the moment she seems to get what she wants – happiness – she turns into a shrill, clinging, stalker.  A charming, shrill, shallow stalker, but still a stalker.

And when you finally come down to it, the true failure of the film revealed – Shallowness!  In the end the film is shallow and unmemorable and forgettable.  Not bad, not good, just a shrug.

I’ve seen this movie before, but probably not since 1989 and therefore have little memory of it.  Hell, I couldn’t even remember that Kathleen Turner was in it.  So, even though I swore to watch only films I hadn’t seen before, I’m letting this go on a technicality.