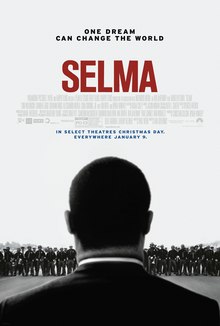 Selma is an important movie.  If you didn’t know it going in, you figured it right quick, and kept figuring it, because instead of being the joke fest you imagined[1], they play it straight as the soberest teetotaler.  Which is a seriously wasted opportunity because, if you ask me, the jokes practically write themselves.  All you have to do is turn on the spigot and here they come.

Still, I suppose they skipped the jokes because it’s usually much more effective to be deadly sober about one of the darkest chapters in American history[2] than making a bunch of jokes, because that way nobody mistakes your meaning.

In a way, Selma uses the fight for voting rights as a proxy for pretty much every struggle in American history, which can all, in one way or another, be reduced to one word: freedom.

The principle this country was founded on and still struggles with today: freedom.

And just as the fight over voting rights stands as a proxy for freedom, Martin Luther King Jr. stands as a proxy for all those who struggle for it, with his involvement in the march from Selma to Birmingham standing as a further proxy for all the other marches, protests and demonstrations held at some other place and time, not Selma 1965.  And by letting the part stand in for the whole, we learn as much about the part, as we do the whole.

It’s obviously tough to be critical of important movies, because important movies are never just movies.  No, they are as much ‘what’ the movie is about as they are the ‘how’ it’s about it, such that, to criticize the ‘how’ almost certainly gets you labeled as critical of the ‘what.’  Call Roots too long and hammily acted and you’re liable to be labeled a bigot.  Call Gandhi a tedious bore and you undoubtedly cast yourself as a pro-violence imperialist.

This, then, is the problem with Selma – criticize the movie and you run the risk of being labeled something you definitely aren’t.[4]  But, because I fancy myself a critic – even an amateur one – I’m bound to provide my honest opinion to my tens of readers, so…

Bluntly, Selma suffers from something I’ll call ‘Important Movie Syndrome’, an affliction that makes a film prone to speechifying, dialog via expository profundities, outright didacticism as opposed to entertainment, obviousness and artlessness, and a certain sort of binarity to the issues.[5] Time and again the players in the film function less as complex people than as obvious positions, as if they do not exist beyond their struggle.  As if there is nothing else in their lives that could give them any other facets.[6]

Thankfully, though while it has ‘Important Movie Syndrome’, Selma actually suffers a light dose.  Yes, it’s prone to grandstanding, but it’s also not a straight up hagiography.  While acknowledging King is a great man and an inspirational figure, it does not shy away from his flaws.  It explicitly reminds us of the violence waiting for him and his family at every turn, and his too-cavalier attitude about it.  It shows his family as mostly secondary – or even tertiary – elements in his life.  It straight acknowledges his affairs – a no-no for a man of God.  And it makes it blunt that, great as he was, King was also prone to grandstanding and coveting the spotlight.

Better than showing the flaws of the man, it shows there was no unified approach to the struggle.  While King favored rapid, revolutionary change through non-violent resistance, others favored the same via violence, if need be (Malcolm X), while others still seemed more interested in gradual action through education and activism (SNCC).  Better still is that rather than deify King, it presents his actions for what they were – sometimes inspirational and brave, and also sometimes confounding, bewildering, and completely senseless.

Best of all, where it shies away from deifying the man, it makes sure we never forget the righteousness of the cause, which is likely why the movie is called Selma and not King.

Importantly, Selma is never boring and is incredibly moving.  The violence depicted on screen is horrific and unjustified and comes across like a gut punch – the death of Jimmie Lee Jackson especially.  And when I watched it and heard all the white folks spouting their hatred – vile, intense hatred – it made me embarrassed to be a white man and ashamed anybody could do any of those things in the name of white people.  It also made me want to go out and find one of those Confederate-Flag-defending jags that are suddenly everywhere and smash that ignorant cracker right in the face.  After all, when it’s clear you can’t reason with stupid, what other choice do you have?

With Birdman being your Best Picture winner, the question is: Is Selma better than Birdman?

For me, the answer is easy – yes.  Unfortunately, that doesn’t mean a whole lot because, aside from Edward Norton, most everything about Birdman rang false for me.  On the whole the film was shallow and pedestrian and propped up by a gimmick.  Without the ‘single-take’ aesthetic, the film would be nothing.  But, because it’s an impressive technical feat, it somehow transcends itself, when it shouldn’t.

So, if Selma was better than Birdman, then it must’ve been a screw job, right?

Yeah, no.  The truth is while Selma was good and worked on me emotionally and rationally, I was moved on a much deeper level by Boyhood than I was for almost any other film in the last decade or more.  Admittedly, you can probably chalk that up to me being a white man from a broken home, and therefore I see lots of things I recognize from my own life in Boyhood, but given it’s almost impossible for any critic to separate their opinions from the things that helped form them, it won’t come as a surprise that my background informs my opinions about the things that move me.  After all, if you are anti-war, you were probably offended by American Sniper, whereas if you were very much a hawkish conservative, you were probably moved to tears.[7]  Similarly, if you are black in this country, it’s very likely the struggle of Selma speaks to you more than a movie about the adolescence of a white kid from Texas.  Thus, because I have more in common with the white kid from Texas, despite being from Michigan myself, Boyhood speaks directly to me.

All that being said, while I prefer Boyhood, if Selma had won, it’d be tough to make an argument against it.  It’s a well-made, respectable and meaningful picture that nobody would ever look back on with disdain.  It’s not the kind of movie where somebody would ever say, “What were they thinking?  Gandhi over E.T.?”

Watching Selma, I found a weird sense of ripped-from-the-headlineness to it.  Not because it was ripped from the headlines, but because the same sort of ugly racism underlying the denial of voting rights is still going strong today.  One need only look at Donald Trump and wonder if he’s somehow George Wallace 2.0.  Or if Kim Davis is the new Bull Connor, only instead of denying the right to vote, she’s denying marriage licenses to gays.

In some ways it’s absolutely true that, Everything Old Is New Again.

[1] Because nothing screams comedy so much as race relations and voting rights, amiright?

[2] Among the many chapters in the book, Dark Chapters in American History: Native Americans – Gimme Your Land or Else; Small Brains, Menstruation and Other Why Reasons Women Shouldn’t Have the Vote; and Internment Camps, the Best Summer Camp of All!  (Before you take offense, make sure you understand I’m using humor to make a satirical point and absolutely abhor the genocide, racism and sexism of my forefathers.)

[3] For the love of God, make no William Wallace of Braveheart jokes.

[4] I can’t say it strenuously enough – nobody should be denied the vote simply by reason of skin color or sex.

[5] In another setting, I would have said ‘black and whiteness to the problem’ instead of ‘binarity to the issues’, because the use of the words ‘black’ and ‘white’ wouldn’t have any chance of being confused with some sort of comment on race.  However, in this setting, it seems much wiser to go ahead and avoid such words.  My point being that in real life, gray areas are everywhere.  In important movies, not so much.

[6] Sadly, the best example of this in the film – or worst, depending on where you’re coming from – is MLK himself.  Nearly every interaction he has seems to be carried on from a pulpit, as if he is always preaching.

[7] Full disclosure – I have not seen American Sniper and have no desire to.